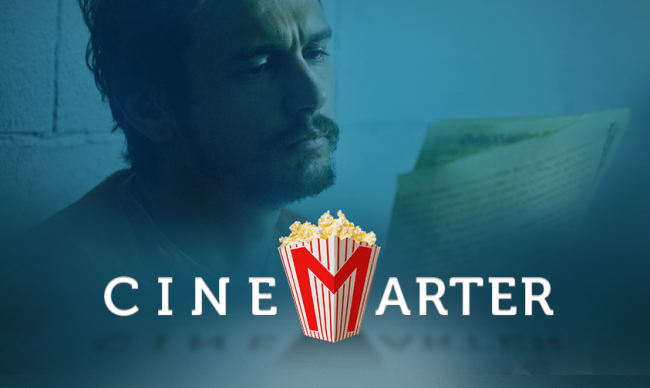 It was just a couple of weeks ago when I was lamenting movies that were based on a true story. Now we’ve got one that doesn’t even need to make the claim – this fact is in the title. True Story is based on a book written by Michael Finkel, which told the story of one Christian Longo, a man arrested and charged with murdering his wife and three children. He was found in Mexico six days after the alleged murders, and had used Finkel’s name as an alias. That got Finkel, a former writer for the New York Times, interested in telling Longo’s story. The film, as a result, depicts their interactions and the subsequent court case facing Longo.

Michael Finkel is played by Jonah Hill and Christian Longo is played by James Franco. If this was a stoner comedy, the casting would make a lot more sense. In spite of this, both men deliver good performances that actually make you forget that this is not the type of movie for which either of them is known. We push out of our mind movies like Pineapple Express and Superbad to focus on these particular characters. We even ignore the fact that Longo’s wife’s name is “Mary Jane,” which I hoped was an in-joke both at Franco’s Spider-Man career and … that other thing, but it sadly isn’t. That was her name. 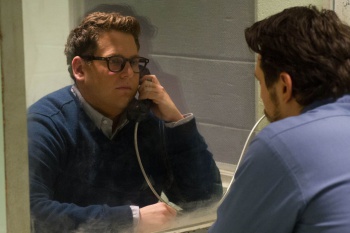 Also disappointing is the film, which delivers its events in the driest, coldest way possible. The two men talk, the two men talk some more, the brief courtroom scene happens, and then the movie ends. We find out whether or not Longo actually did it – the narrative hook is that he may be innocent, since he hasn’t yet confessed and seems to be hiding a secret – and then the movie ends, and we come away having gained very little.

Some of the more fascinating things that come from True Story don’t involve the murders at all, actually. Its framing sees Finkel fired from the New York Times for creating a composite character for a story he did about slavery and abuse in Africa. Watching him try to find someone to take him on to write another piece is fascinating. His conversations with a publisher over trying to get a book deal for Longo’s story are similar in this regard. Longo also wants to write, and agrees to tell Finkel his story if Finkel will teach him how to write better. So, that happens. Yes, in a movie about murder, writing tips and journalistic ethics are more interesting. Something went wrong.

Given that True Story is based on real events, you can look up what happened and avoid ever having to see this movie. The only thing you’ll miss are good performances from the two leads.

True Story comes to us from director Rupert Goold, a veteran of the theater but whose only previous filmed credits come from made-for-television adaptations of Shakespeare, work that does not seem to have any influence here. He doesn’t bring any depth into these characters or deliver anything that one couldn’t get from reading about the story on the internet. That’s the most disappointing thing about True Story, really; the film doesn’t give us any insight into a story that had the potential to be smart and thrilling.

This is the type of movie that frustrates me. Much like The Loft from earlier this year, it holds your attention despite dull or despicable characters simply because you need to make it to the end. Nothing except a desire to complete it is keeping you watching. There’s nothing to the people and not much to the story beyond its mystery, and there aren’t even any higher concepts or ideas at play. It’s literally “I need to find out what happened and then I can stop.” Given that True Story is based on real events, you can look up what happened and avoid ever having to see this movie. The only thing you’ll miss are good performances from the two leads.

Don’t get me wrong: Both Hill and Franco are good here. And seeing them in 100% serious roles is a pleasure and almost something for which it would be worth seeing True Story. We don’t get that too often, and especially not when these two get together. The only way it would be weirder would be if Seth Rogen was in Jonah Hill’s role, although then we may not be able to take it seriously at all. Still, good acting can’t always make up for bland, uninteresting characters and lifeless direction. As a result, True Story simply can’t be worth your time if you’re hoping to get a compelling movie about these two characters. But as a cautionary tale about ethics in journalism? It’s almost effective.

Bottom Line: A mediocre-at-best retelling of real events, True Story doesn’t offer any insight to make it worth sitting through.

Recommendation: The two leading performances almost make it worthwhile. For fans of Hill and Franco it may be worth a rental.