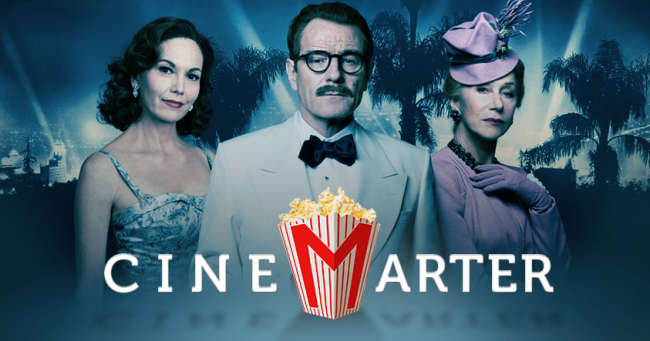 Dalton Trumbo was a Hollywood screenwriter whose most prominent projects came in the 1940s, ’50s, and ’60s, although his work in the ’50s – during which time a film he wrote won a Best Screenplay Oscar – was done using various fronts. Why was this? Well, Trumbo was blacklisted after refusing to testify before the House Un-American Activities Committee, whose job it was to find out if there was a secret Communist plot underfoot in Hollywood – and eventually elsewhere. Trumbo tells his story, and showcases a man who believed that standing on principle, and standing up for one’s values, is worth more than anything else.

Trumbo is played by Bryan Cranston, an actor who ensures that every line of dialogue is said with such an importance, and such witticism, that it is captivating. The film even comments on this as it’s playing. Trumbo was a member of the Communist Party back when Fascism was America’s greatest fear, but after WW2 and the Soviet Union became the nation’s enemy, a magnifying glass was turned inward toward former – or current – Communist Party members, in order to ensure that no American secrets were being leaked to the Soviet Union. 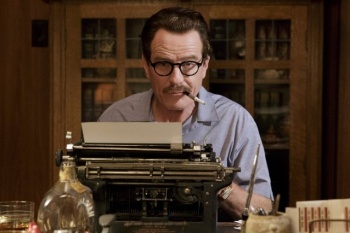 Dalton Trumbo was called to testify, but refused, and served a significant time in prison as a result. After being released, he became blacklisted by the studios that ran Hollywood and found himself unable to work. Several other prominent people in Hollywood were in similar situations – the Hollywood Ten, they were called.

Watching these events taking place from 2015 is a shocking – and, at times, hilarious – experience. The absurdity with which the events proceed seems like a joke – as if this sort of thing couldn’t have taken place. But it did. If Trumbo does nothing else, it’ll inform the public of these atrocities. This isn’t a topic that gets brought up very often – especially in the movies – and it might be one with which the general public is unfamiliar. Trumbo is an informative biopic, and one of its main strengths is simply being educational.

Bryan Cranston does such a fantastic job at bringing Trumbo to life; in a weaker acting year, we might be calling for him to be nominated for an Oscar.

Trumbo also functions well as a testament to sticking to one’s virtues and principles, which is a topic that is always, and will always be, relevant. Watching Trumbo endure the abuse, and fight to work in a system that doesn’t want him, is inspirational. That it’s Trumbo doing it – a character who speaks so articulately and with such gravitas that you can’t help but listen – makes the actions even more powerful. Bryan Cranston does such a fantastic job at bringing Trumbo to life; in a weaker acting year, we might be calling for him to be nominated for an Oscar.

Unfortunately, the screenplay – written by John McNamara and based on Bruce Alexander Cook’s biography Dalton Trumbo – plays out far too much like Biopic 101. It would not live up to its subject’s lofty standards, and he’s the man who wrote The Green-Eyed Blonde. So many of the moments feel like they were lifted from other films, and while they’re still fun in the moment – almost entirely because of the actors involved – they leave you feeling as if the story isn’t as special or as powerful as it should be.

Still, there are other moments that are fantastic, such as every scene involving Frank King (John Goodman), a schlocky film producer who hires Trumbo and his friends to write quick and cheap garbage, or how perfectly Dean O’Gorman nails his Kirk Douglas impression. But it all comes together in a movie that just can’t get beyond how generic it all feels. We haven’t seen Trumbo’s story told in a narrative feature before, so it shouldn’t feel as if we’ve seen it before. But that’s what it’s like to watch Trumbo.

An educational biopic featuring some great acting and a few tremendous individual moments, Trumbo is a movie that hopes to inspire its audience members to stand up for their principles and values – regardless of the repercussions. And while it does that, to an extent, it often feels too Biopic 101 to truly captivate and instill that feeling in those watching. Bryan Cranston is great in the lead role, he’s supported by the likes of Diane Lane, Louis C.K., Helen Mirren, John Goodman, Alan Tudyk, and others, and the film will teach audiences about a dark period in Hollywood’s life, even if it may not truly excite. It’s shocking and sometimes funny, but it’s only decent.

Bottom Line: Trumbo is a decent attempt at telling its screenwriter’s story, but with a generic script, it isn’t as special or powerful as it could have been.

Recommendation: If the Hollywood Blacklist or Dalton Trumbo interest you, then you should definitely see Trumbo. Otherwise? Eh, it won’t be a waste of your time, but you can watch better movies.