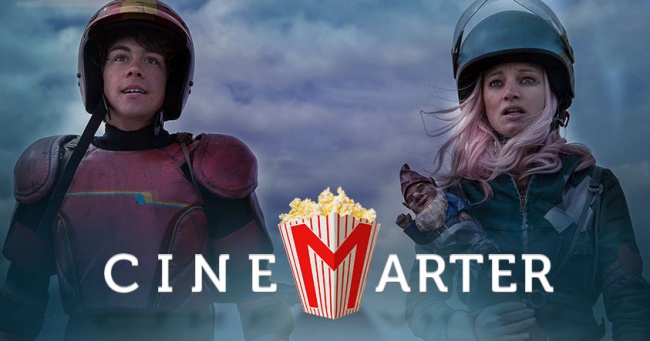 I loved it. I loved every second, every frame, every reference, every gory kill, every joke – everything. There’s no beating around the bush here; Turbo Kid delivers exactly what it needed to in order to be one of the best B-movies I’ve ever seen, one of the most enjoyable experiences I’ve ever had at a movie theater, and one of the films of the year, even if its approximate budget is probably less than most films get to spend on marketing, let alone actually creating the motion picture. It’s a glorious homage to ’80s action-adventure movies, genuinely funny, incredibly bloody, and surprisingly sweet. I. Love. Turbo Kid.

The plot is not complicated, although it contains a few surprises. Set in the near-future post-apocalyptic land of 1997, our lead is The Kid (Munro Chambers, perfect in this role), an orphan who has managed to survive relatively happily on his own for several years. He loves comic books – particularly one called Turbo Rider – collects flamingos, and rides his bicycle everywhere. Everyone rides bicycles, actually; there’s no fuel for cars, after all. All in one day, he (1) meets Apple (Laurence Leboeuf, whose infectious smile lights up the screen), the most optimistic person one can meet; (2) finds a real-life version of the suit from Turbo Rider, donning it to become the eponymous “Turbo Kid”; (3) teams up with Apple and Frederic The Arm Wrestler (Aaron Jeffery), an Indiana Jones/Mad Max/Man with No Name hybrid, to defeat the evil Zeus (Michael Ironside), a warlord who turns people into clean-ish drinking water. 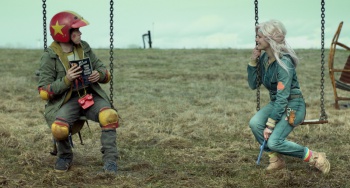 How’s that for a premise? Mostly, we follow The Kid and Apple as they journey across the wasteland in search of things to aid them, which often leads them into some of the bloodiest, goriest action scenes you’ll see this year, or any year. If you’re someone who gets excited at the sight of over-the-top blood and guts in a movie, Turbo Kid will fill you with glee. Yes, it’s excessive, but that’s part of the charm of these sorts of movies. They’re allowed to take things to the extreme, they’re allowed to point out absurdities, and they’re allowed to have as much fun as they want. Turbo Kid wants to have a lot of fun, and it does exactly that.

Turbo Kid is a B-movie done so well that I honestly can’t think of a movie I’ve seen this year that was more fun.

It would be really easy for a movie like this one to simply lampoon the movies from which it draws inspiration. But despite frequently making fun of the films of old, it never does it in a mocking way. It does it with love, with nostalgia, and in knowing that without those films paving the way, we wouldn’t be able to have some of the nice things we have today. Turbo Kid never feels mean-spirited, and in many ways captures the very essence of the films it’s emulating. The good guys are embodiments of pure goodness, the bad guys are cartoonishly evil, and that’s all you need to know about that. You find yourself getting caught up in the good-versus-evil story incredibly easily.

Of course, if you grew up on low-budget ’80s action movies, you’re going to notice a lot of references to those, as well as just general nostalgia for the era. From the random items that are found, to the way that the characters keep warm at night (they burn certain video-recording devices), everything is done with love for a time period long since passed. But it’s not just a nostalgia trip; most of this is done with a purpose. Granted, most of it is to make you laugh – Turbo Kid is an incredibly funny movie, on top of all this – but at least it’s not just throwing things at us and telling us to remember when they were things. It could have done that and still worked – and it does occasionally fall into that trap – but by being more it sets itself apart from other nostalgia-driven properties.

When B-movies are done right, they can be some of the most enjoyable things you can see, assuming you can handle the over-the-top style, the inherent cheesiness, and the gore – oh, the gore! Turbo Kid is a B-movie done so well that I honestly can’t think of a movie I’ve seen this year that was more fun. Yes, it tops even Mad Max: Fury Road. Everything about it is a blast. There isn’t a scene that doesn’t work, a line that makes you do a double-take, or a kill that isn’t incredibly enjoyable – and bloody. Turbo Kid is hilarious, sincere, filled with nostalgia, and an incredible amount of fun. I love it.

Recommendation: Fans of B-movies need to see Turbo Kid as soon as possible – but so should anyone who has any affinity for the ’80s, action movies, or comedies.

Expand Your Zombi Inventory With These Bag Upgrade Locations