Twin Peaks ramps up the drama in the season 1 finale, “The Last Evening.”

We’re re-watching the classic David Lynch series Twin Peaks before it returns to television on Showtime in 2016. Want to join us? The entire series is available on Netflix (or Amazon, if you’d prefer high-definition Blu-rays), and then catch up on our reviews. Now, on to this week’s review of the finale of season 1, “The Last Evening.”

This episode seems to open on a beautiful beach scene, but as with many places, people, and situations presented so far in the series, appearances aren’t everything. In fact, the “beach” is a poster at Dr. Jacoby’s place, and may be the only truly serene moment left in this season. It seems like a very deliberate bait and switch tactic, and I think it may be a nod to the way that the show itself is full of reassuringly beautiful scenery, likable characters, and a slow-paced development of various plots. That setup has been tampered with throughout the season, the heat has been gradually turned up, and events have truly reached a boiling point. The next hour is one hell of a ride.

As Donna and James snoop around looking for Laura’s missing tape, Dr. Jacoby investigates the gazebo near his house and sees “Laura” (Maddy in a blonde wig) waiting in the dark. Just at that moment, he is attacked by a man in dark clothes and a ski mask, who beats the doctor repeatedly, then leaves as James and Donna show up, just a few yards away. The camera fades to the next scene as Dr. Jacoby takes what is presumed to be his dying breath.

So far, in Twin Peaks only two people have been murdered: Laura Palmer (of course), and Jacques Renault’s brother (who only had a cameo in one episode and was killed by Leo). Death is not exactly a regular occurrence in this beautiful mountain town…at least not so far, but about five minutes into the hour, the audience is shown how quickly things can change.

Meanwhile, at One Eyed Jack’s, Cooper is playing blackjack with Jacques Renault dealing. Cooper invites him to have a drink, and then pretends to be the bank for Leo Johnson’s cocaine ring: he tempts Jacques to come back to the US with the promise of a job and a big payday. Jacques takes the bait. But in the course of their conversation, Cooper gets him to explain the poker chip with a bite taken out of it (which was found in Laura’s stomach) — and Jacques’ explanation of what happened that night adds yet another bright red arrow pointed directly to Leo Johnson as the prime suspect.

Then again, there is the issue of Bob to consider. By conventional murder mystery standards, the real killer would be revealed as one of the characters followed throughout the story. Part of the formula to a successful mystery is to allow the audience to guess at the guilt of characters for themselves as the story is told, so if you don’t present the real killer to the audience as a character early on, the audience has no chance to establish a connection and be proven right, or taken by surprise by their own judgment. This is murder-mystery 101.

David Lynch and Mark Frost turned that standard upside down through Bob. Bob is introduced early on as “the killer”: his piercing eyes, long grey hair and disturbing smile are shown in full light (even though it is in visions). The catch is that Bob is nowhere to be seen in all of the various storylines taking place. He removes the mystery from conventional standards, seeming to be an incarnate spoiler, but is himself removed from the character roster, allowing the townsfolk of Twin Peaks (and the audience, if we forget about Bob) to operate as though this were a more classic “whodunit”. Through that filter, all evidence is pointing towards Leo. And the paradox of Bob should be left alone (for now). 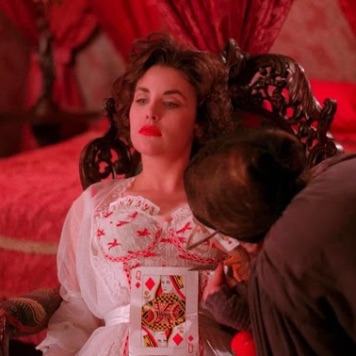 Before leaving One Eyed Jack’s, we see Audrey Horne in a room, getting ready for her undercover job as a “hostess”. She is in way over her head, and shown only briefly before the action turns to Shelly Johnson, who is living her own personal hell.

As far as Shelly knows, she killed her husband (Leo) when she shot him a few episodes back, and she is contemplating going on the run. The first step would be to change her appearance, and so she decides to bleach her hair. As she works up an eye-stinging lather in the sink, Leo comes out of nowhere and subdues her, vowing to make her pay for what she did.

Before we can catch our breath, the next scene unfolds with Andy and Truman waiting for Jacques Renault to show up. Seconds later, as he’s being handcuffed, Jacques breaks free and grabs a nearby deputy’s gun, aiming for Truman. But he is shot in the arm by none other than deputy Andy himself, fresh out of the firing range and standing cool as can be with his gun still raised up: the hero of the day. This moment is still one of my favorites in the series.

Afterwards, the trio of Donna, James, and Maddy are shown listening to the tape they stole from Dr. Jacoby. It’s on this tape that Laura reveals that her mystery man drives a red corvette (which is Leo’s car), and James hears that she thought he was sweet but dumb. He handles the situation wonderfully, seeing it as a chance to find closure regarding Laura, rather than letting her barbed remark cut him too deeply. In the midst of everything else that has happened in the episode so far, this emotionally charged scene seems like a break in comparison, and sure enough, without delay we are taken right back into the thick of it. 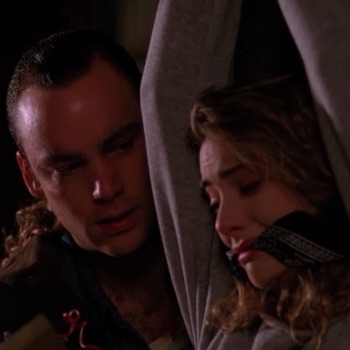 The Packard Mill is being prepped for arson by Leo Johnson, and Shelly is tied up in the midst of it, waiting to be burned alive. She has roughly an hour to think about how she wronged him, and Leo assures her that Bobby Briggs will be dead within that hour.

And still the plot ascends to previously unknown heights as the camera shows Nadine Hurley setting herself up for suicide by pills. She was fractured from her introduction, always flirting with madness, but at this point she is truly broken. As unlikable as she has been throughout the series, I couldn’t help myself but to hope for some sort of Deus Ex Machina to intervene on her determination to kill herself.

But the action moves on without a whisper of hope. Death, which was mostly flirted with in the series so far, has descended on the town of Twin Peaks as an avenging angel. No one is safe, and all bets are off by this point. 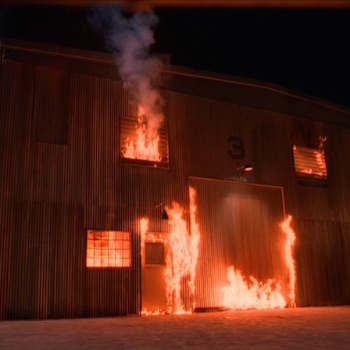 As the fate of Nadine is left dubious, the next scene centers on Hank Jennings (really bad guy) and Josie Packard (widowed owner of Packard Mill), who is much more than she seems: dealing with Ben Horne in a double cross of her sister-in-law Catherine, and now paying off Hank for killing her beloved husband in the first place. Josie seemed sweet and innocent in the beginning of the season, but is clearly not to be trusted.

If Laura Palmer is the murder mystery center of gravity in the story, the Packard Mill story is the soap opera equivalent. All of the major players in that storyline (Ben Horne, Josie Packard, Catherine Martell) conduct themselves with an air of treachery, deceit, lust, greed, envy, pride, and general corruption that would put the best-rated soap operas to shame. Pete Martell is more or less caught in the crossfire of their dealings, although he has a soft spot for Josie, and tends to help her when he can.

Speaking of which, Catherine and Pete share their first non-bickering exchange in the next scene. Catherine knows that she has been set up, since she found out about the life insurance policy that was taken out on her by Ben and Josie. She’s trying to find her fake ledger and breaks down in front of Pete, asking for his help. This is the first time that Catherine seems like she may have a heart after all, but she isn’t used to it (as seen on her face when Pete embraces her).

Cooper and Truman interview Jacques Renault in the hospital next, discovering that he was passed out when Leo, Laura and Ronette left the cabin, so he didn’t witness them being killed. The murder took place in a train car, after all (not the cabin). Although it’s completely obvious by this point that Leo was the killer, remember that in Twin Peaks nothing is quite what it seems. For example, Dr. Jacoby is also in the hospital at this point, having survived his attack (but remembering nothing useful).

After a few minutes of conversation-driven scenes, the action picks back up to a boiling point, when Leo Johnson gets shot (again), the Packard Mill is set on fire, Jacques Renault is murdered, Audrey Horne discovers that her father owns One Eyed Jack’s (and is planning on trying out “the new girl”, being her) and just when you thought that you had seen enough, in the final seconds of the season Agent Cooper gets shot. Roll credits.

David Lynch and Mark Frost crafted this episode as leverage so that they could be guaranteed a renewal for the second season. All shows do this, but normally not with such audacity, which is all part of the charm. The second season starts out with a bang and tells a compelling series of stories. Season 3 will almost certainly be unique, and I hope to see it capture the magic that makes this now 25 year old show still so memorable.

Bottom Line: The season ends with a series of bangs, containing memorable performances from the entire cast and resolving certain cliffhangers while introducing much more suspense in new developments.

Recommendation: If this is the only episode you see, you’d probably never watch the show again, but if you have been following the series to this point, you are in for a serious ride.