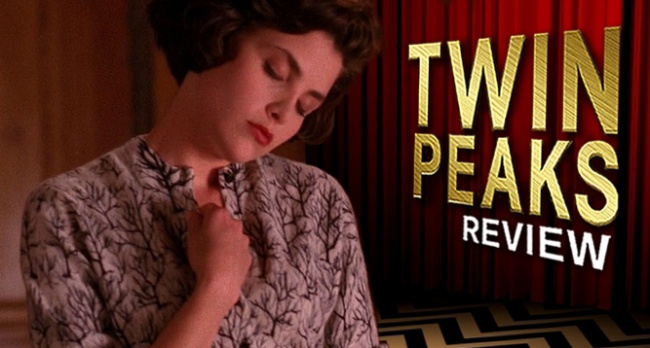 Sure, this episode doesn’t really further the plot, but it does draw you ever further in to the bizarre world of Twin Peaks

Laura Palmer is dead. Agent Dale Cooper is going through his morning routine after spending his first night in the mountain town of Twin Peaks. He is hanging upside down, which might be to encourage an early morning burst of blood-flow to his brain, or an exercise routine. I’m inclined to believe that the episode opens with him in this position as a clever way for David Lynch and Mark Frost to tell the viewing audience that all of the norms they had come to expect from television were going to be very deliberately turned on their heads in Twin Peaks.

Cooper has a habit of dictating his thoughts, as well as business expenses and equipment/personnel needs to a contact at his field office headquarters: a woman named Diane. It is one of his many quirks, which are revealed in due time.

While upside down, Cooper tells Diane that he will check back in (to his cassette voice recorder) after he has had his morning cup of coffee. Cooper could have used a phone to relay his per-diem and other FBI related business, but that wasn’t his style. He preferred to keep an ongoing audio diary on cassette, which he would then mail to Diane. I can’t help but empathize with her task of sorting through various philosophical rants about JFK and Tibet while trying to translate expenses and nail down exactly what equipment or specialist her assigned field agent needs. All standard operating procedure.

The scene cuts to the hotel dining room, where Cooper has “a damn fine cup of coffee”. As he orders his breakfast, he is approached by the sultry-but-entirely-too-young-for-him Audrey Horne, who shamelessly flirts with him. Audrey’s father, Ben Horne owns the hotel where Cooper is staying, along with the town country club.

After breakfast, agent Cooper heads to the police station. He encounters Deputy Andy, chatty dispatcher Lucy, and Sheriff Truman: all with mouthfuls of food. Andy mumbles, “Good morning” as best he can, and Lucy tries to give detailed directions to the conference room through her doughnut, which Cooper mercifully cuts short. Sheriff Truman is stuck just chewing in silence as the fully-caffeinated Cooper rattles off the to-do list of the day.

This is the type of scene that is rarely depicted on screen, for several reasons. First, the number of potential takes, and therefore calories consumed and fresh, uneaten plates of identical food needed to make any given scene work is unknown. What looks like a single bite from a doughnut on screen could have required ten bites from ten different doughnuts (or more) before all of the elements came together. Secondly, if actors are eating they are not speaking (or at least, not speaking well). Often, when food is presented on screen it is ignored and talked over, but not here. 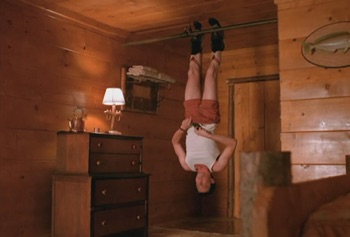 The rest of the show deals mostly with Cooper learning what he can about Laura, while Lynch and Frost dangle suspicion over the heads of different male characters. There are very few men in Twin Peaks who are not “obviously the killer” at some point during the series. I was sure the killer was James Hurley until the end of the pilot, when Bobby and Mike started howling like rabid fiends in their jail cell, and now that ponytailed trucker Leo Johnson seems a sure fit. But later on it will clearly be established that the wacky Dr. Jacoby did it, or that show salesman with one arm, or that long haired, crazy looking guy named Bob (who only appears in the visions of Sarah Palmer and dreams of Dale Cooper), or that lady with the log… it could be anyone!

This atmosphere of suspicion can really get into your head. It is a town-wide version of the classic murder mystery, set up in a claustrophobic room full of different characters, one of which is the real killer. At one point, I was entertaining the idea that dimwitted deputy Andy was actually the real killer, because that would be truly unexpected.

Over time, as the mystery remains unsolved, the audience is surrounded by people who are revealed to have reprehensible secrets, but ultimately only one of these people killed Laura. Unless of course there is a massive, town-wide cult that all joined in to kill her together like in The Wicker Man… and we’re back to square one again.

Meanwhile, Laura is revealed to have been full of secrets, herself. The coroner’s report indicates that not only was there cocaine in her bloodstream (which had been set up in the pilot), but that she had sexual relations with at least three men in the twelve hours before she died. James Hurley is quickly cleared of suspicion (at least for the time being) when questioned by Cooper and Truman. But Bobby and Mike are allowed to go with nothing more than a “make-sure-you-get-your-stories-straight-before-we-talk” bluff from Agent Cooper, though he does warn them not to go after James in retaliation for sleeping with Laura (who was dating Bobby).

Cooper operates on a blend of intuition and deductive reasoning: his methods are very instinct-driven, and ultimately prove to work. He senses that both James Hurley and Bobby Briggs are innocent of the crime, even though they both stood as prime suspects with weak or absent alibis.

Several other classic moments unfold during the course of this episode (for instance, the fish in the percolator). I was struck when Lucy proved her habit of over-describing things useful by explaining the sound of a long-distance phone call in 1990: “It has that open air sound, you know, where it sounds like wind blowing. Like wind blowing through trees.” 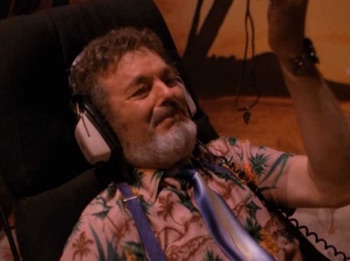 The episode ends casting a strong shadow of suspicion on Dr. Jacoby (who looks like he may have been the world’s first true hipster). Jacoby is shown listening to a recording from Laura while in a bizarrely beach-decorated room in his signature wacky clothes (but not his prescription red and blue 3D glasses) while casually snacking. He opens up a hinged coconut to reveal the heart necklace that Donna and James had buried towards the end of the pilot. The pilot ended with a gloved hand digging up the necklace to a backdrop of eerie “this-is-the-hand-of-the-killer” music and this episode ends with Dr. Jacoby in possession of that very necklace.

But he may not be the killer after all, even in this most damning position, because Laura starts telling him about a “mystery man” in her recording, whom she seems to be legitimately afraid of. He puts on his headphones and cuts off the sound from viewers right as she starts shakily talking about this mystery man. It is only then that Jacoby is shown to have the necklace, and he starts to sob for Laura. Viewers are deliberately manipulated into suspecting both Dr. Jacoby, who is weird and creepy and has the damned necklace, and the mystery man whom the victim herself is confiding to Dr. Jacoby about.

The episode is aptly titled “Traces to Nowhere,” as it leads down a series of false trails and dead ends, leaving us with questions rather than answers. But the signature charm of the series makes it so that such a conclusion isn’t so much frustrating as it is captivating.

Bottom Line: At this point in the story there’s little forward action, much talking and a slight progression of several different story lines. I believe the intent of David Lynch and Mark Frost at this point was not to move the audience forward through their story, but rather to draw the audience deeper into their world, and this episode worked very well in that regard.

Recommendation: While there are better episodes to come, this one can’t really be skipped without viewers losing track of certain key elements. Bear in mind that this is still an introductory phase of the series, however there are many good moments here (and many more to come).

Buy an AMD R9 GPU, Get Civilization: Beyond Earth for Free

How Shadow of Mordor Embodies the War on Terror