The first turn is always the easiest. It begins with an empty canvas, full of opportunity and consideration. Does the gap call for a platform, or maybe a springboard? There’s a lot of hope in the empty space between start and goal, and in the same breath, there’s also a lot of opportunity for danger and chaos.

So it goes in Ultimate Chicken Horse, a two to four player competitive platformer game. Players pick their animals, and all begin on a map with a set beginning and end point, and must successfully run and jump to reach the end. What stands between them is likewise up to them, as before each round of platforming, players make additions or subtractions to the stage between challenging the stage. The additions can be anything from safe landing spaces to spinning sawblades. Once every play has had a turn adding new hazards, every player takes a shot at getting to the goal with the new, dangerous Rube Goldberg machine connecting the start and end points. 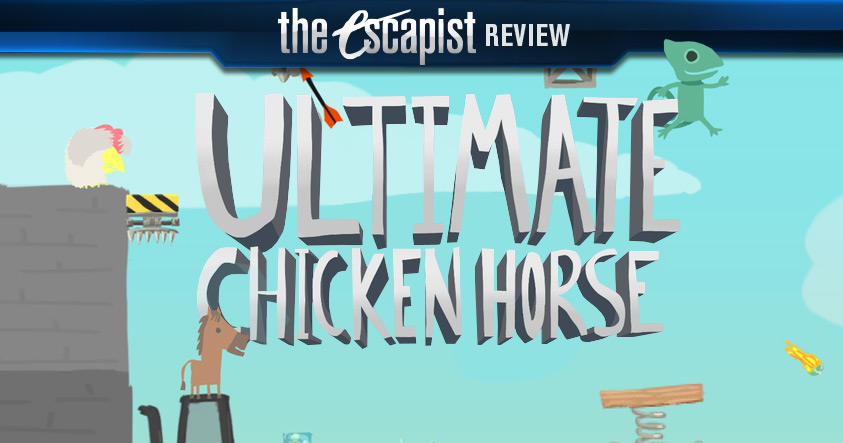 Each player that successfully arrives at the goal gains one point, first player to five points wins. Additional bonuses are granted for making comebacks, collecting player-placed coins while navigating the deadly machinery, and placing a trap that killed another player.

The construction system between platforming rounds is surprisingly robust. The entire stage is broken up into 5×5 grids, which helps give a sense of scale when trying to figure out how far to make certain platforms to make jumps challenging, or whether or not things like buzzsaws or barbed wire hurdles would make a jump impossible. Anyone who’s at least somewhat familiar with 2D platformers can usually develop an intuitive sense of scale by the end of their first game, and can develop suitably devious traps and hazards by the end of their second. There are about 30 placeable items, split pretty evenly between threatening and nonthreatening options. Most of the nonthreatening options are fairly simple at a glance: stable platforms, moving platforms, trampolines, rotating platforms, unstable platforms, and opening and closing doors. The hazardous ones are more creative: arcing cannons, linear arrows, stationary spike balls, spinning buzzsaws, and trajectory-altering black holes. 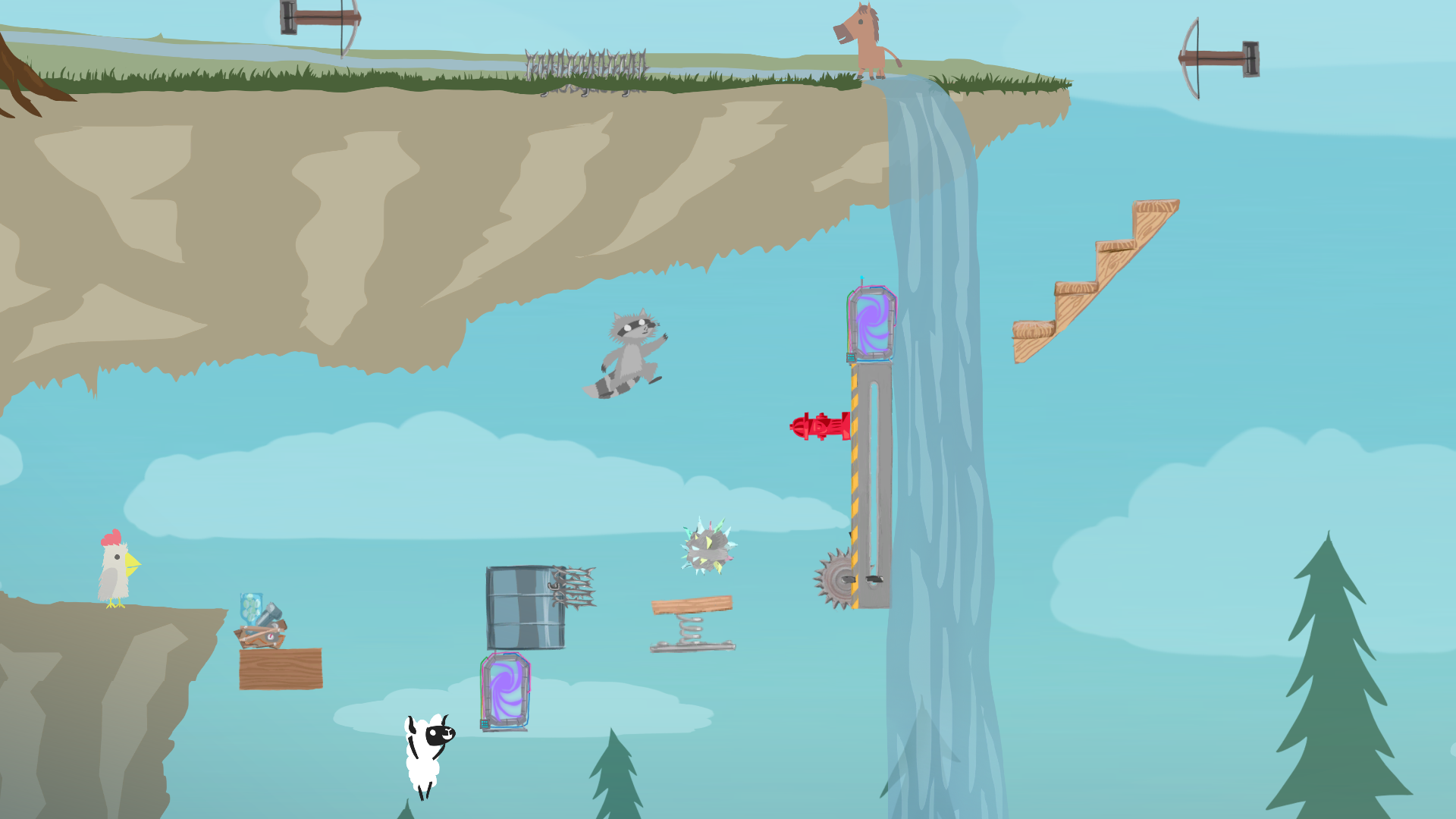 The name Ultimate Chicken Horse actually describes the central concept for the game very well, broken down. Since all players have to go through the same platforming stage, every hazard added is like playing Chicken with death, hoping to barely squeak by while the opponent does not. Likewise, players are competing to perform feats the other cannot, similar to the basketball game, Horse, where the first player to five points wins.

The game always stays simple enough to be understood. From a glance, it’s pretty obvious to figure out what a trap does from the selection screen, the grid helps keep the location of every placement clear and uncluttered, and the two-button platforming is intuitive within the first few seconds of play. It means that this game could be set up on a laptop, plopped in the middle of a crowded convention hall, student union, or dorm room, and everyone around the screen will have figured the whole thing out before anyone has two points.

While the traps are building up and platforming quickly goes from strategic platforming to improvisational panic, the game shines. Each trap, taken on their own, is actually incredibly easy to overcome. None of the traps are, by themselves, supremely deadly. However, seeing how two or three unrelated traps can magically come together in unintended ways creates a work of sadistic art, putting an impossible spin on something so otherwise conquerable. Split between multiple players all building up hazards for different approaches or play styles, the resulting deluge of death manages to undercut any sense of boring, mechanical necessity of overcoming your own hand-designed traps. Where it could be boring, the introduction of other players makes the machine feel fresh, even if one player recycles the same design every game, the end result can and will become entirely different. It’s a joy to experience the insanity of others in physical form. 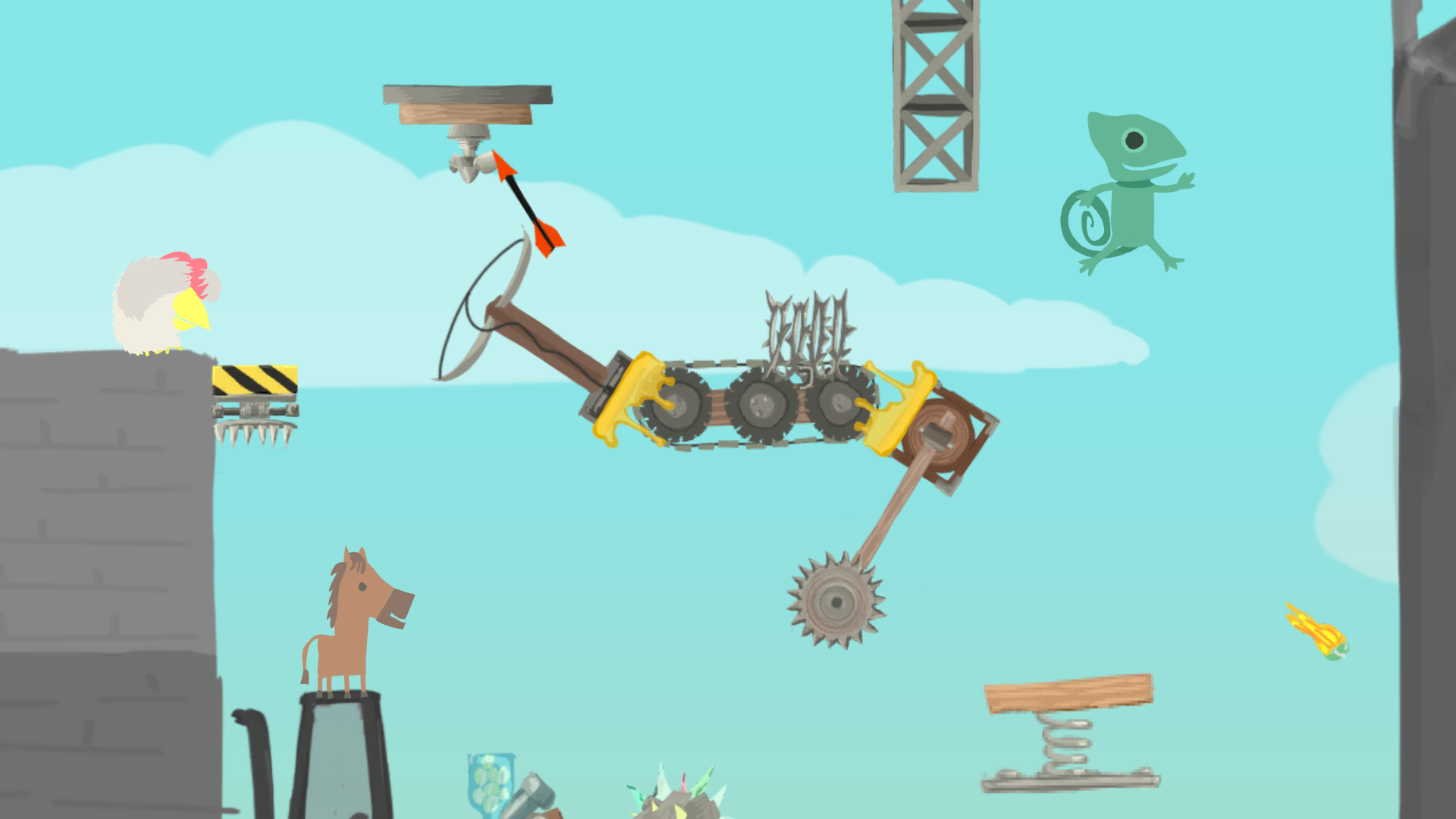 The problem is that leads are hard to shake. Although late game upsets aren’t impossible, the constantly ballooning string of threats means that any player who has an early advantage has plenty of opportunities to hold onto that lead by simply piling on impossible or near-impossible traps onto the stage and letting the opponent exhaust their options trying to undo the miasma of hazards that a stage can become. While it doesn’t necessarily make the platforming or the trap interactions any less fun, it makes the competition less balanced, which can break the game for players in it for the competition rather than in it for the platforming. And, unfortunately, there’s no easy way to address that.

Perhaps with a singleplayer mode to ease players into building, and giving them a deep look into what makes a stage hard-but-fair rather than punishingly hard, it would be less of a problem. However, there is no singleplayer. Nor is there a way to enjoy the game without a couch full of buddies, at least until the online mode comes out. As it is, stages seem about as likely to spiral out of control as they are to be well-designed.

In the building phase, players have access to a bomb that will destroy all traps in a 3×3 grid, but the bomb can’t undo traps further apart, and sometimes all it takes is one good trap to make three or four others become infinitely more hazardous. Without more tools than the bomb, or the wherewithal to curb overly dangerous stages from ballooning out of control, it can mean that underdogs never manage to overcome the enormous point leads against them, even with the comeback bonuses.

However, with a good group of friends and the desire to have fun platforming without the obsessive need to absolutely win, Ultimate Chicken Horse is a blast. The build phase is easily grasped and fun to work with, building impossible deathchinery just to hurl everyone’s best effort against is exactly the right kinds of ridiculous, and although the stages can quickly segue into insanity, the tone never deviates from the playful, jovial tone of an afternoon spent playing with friends.

Bottom Line: Ultimate Chicken Horse does everything it tries to do very well, but a few quibbles keep it from greatness.

Recommendation: One of the better single screen, couch-friendly party game experiences. If it had a better guiding hand for stage building, especially for new players, it would be one of the best.