Right, I’m declaring a new fatwa. Because I’ve seen the little game you’re playing now, triple-A games industry. Some of you who occasionally drift close to the surface have picked up on the vibe that quick time events – the kind where you have to press something in the middle of a cutscene or else you die and have to start the cutscene again – are really, really shit game design. And that wasn’t something you wanted to hear, was it, because those quick time events make things so much more convenient for you. Triple-A games are duty bound to use their excessive funding and technology to be as mindlessly impressive as possible, and that means big-cock explosive action sequences from here to the horizon.

Which would be fine, but the prevailing idea seems to be that these action sequences need to be utterly pre-determined, with no inconvenient player input affecting the impressive spectacle intended and rigidly enforced by the developer. Personally, I blame trailers. Demos were working fine for an interactive medium, but nooo, still got to woo those uncommitted shitheads who can’t be bothered to download the demo, so now every game has to have a movie-style trailer as standard. And consequently there have to be lots of trailer moments in the game, which a lot of animators and sound designers spent a lot of time on so you can’t let the inept hands of players ruin it.

But then you run into the obvious problem that this is a game, not a film, and action by itself cannot engage. We’ve established that. But what can you do? Just keep the action fully playable and allow trailer moments to occur organically within established gameplay rules? Create enough context and keep the action reasonable enough that we can care about the characters involved and get a realistic sense of weight, effort and impact? Both these options provoke a hearty “PAH HA HA no.” No, let’s just make lots of over-the-top stunt sequences where you have to press a single button when prompted.

And then that stopped working so well, on account of it being shit. There’re a few tricks that triple-A games are employing to innovate in the field of quick time events: there’s the one where the button you press is the button used in gameplay for a similar action to the one being considered in the cutscene, because the game we’re looking to for innovative ideas is fucking Dragon’s Lair now. There’s the idea of having the quick time event always being the same button so you can at least train yourself to smash that one whenever the cutscene inexplicably pauses for a quarter of a second.

But these methods can never escape the stigma of the QTE, so the other thing you can do that has precisely the same benefit but isn’t quite so insultingly brazen is the pre-determined escape sequence. In this case, the player remains in full control, but the area they have to get through is completely linear and the camera none-too-subtly points towards the next spot you have to run/jump to. The path is covered in invisible trigger points that make things explode or collapse as you pass through the best spot to view them from, like you’re the universal law of entropy manifested in human form, and if you don’t immediately move in the only acceptable direction then you will be immediately killed. 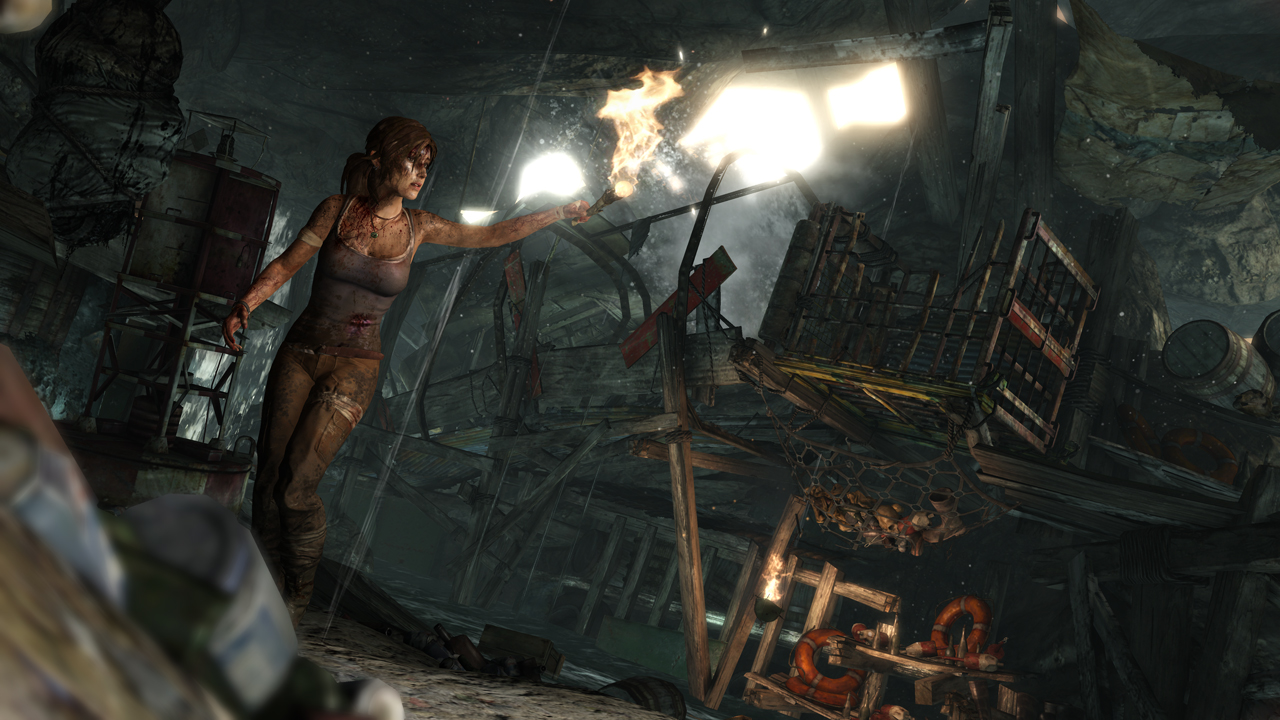 Best of all are the times when such things are intercut with non-interactive cutscenes, with zero indication of when one has passed to the other. So we have wonderful moments when Lara Croft has some kind of scripted reaction, is hurled out of a window by an explosion, grabs a zipline just in time to land at the start of a collapsing bridge, and proceeds to stand there working her underpants out of her bum crack as the floor gives way behind her because you didn’t realize you were supposed to be pushing forwards.

And then there’s the other kind of sequence triple-A games are fond of for giving the illusion of interactivity where in fact there is none: the Sliding Down Something Sequence (SDSS) and its close cousins Falling Down Something Sequence (FDSS) and Flying Up Something Sequence (FUSS, as in, stop making such a FUSS about coining new initialisms, Yahtzee). These have the same benefit as the pre-determined escape sequence except you know exactly how long it takes and you are spared the inconvenience of the player having to push forwards. The player just controls the protagonist two-dimensionally to avoid obstacles flying towards them, a la Space Harrier.

These are all very clever ways of getting to rigidly script your action moments without having to resort to using the classic quick time event. Well done for thinking them up. But a rose by any other name is just as uncomfortable when shoved up the cockhole, and just because they’re not technically quick time events doesn’t mean they aren’t fueled by the same hateful attitude: The notion that video games should be like films, and that all their interactive elements should be flaked off bit by bit as more effort is pumped into barely-interactive meaningless stunt scenes.

Which is a massive disservice to the medium. I’m not necessarily saying games are inherently better than films (although I do think so and I’m right) but they operate on an entirely different level. What I have found to be one of the most desirable qualities I look for in games these days is the water cooler factor – when everyone who’s playing the game can get together around a water cooler or burning barrel and talk about the experiences they’ve had, and everyone can have a different story to tell. That is not a factor the game possesses if all of those stories are exactly the fucking same.

If you must have a trailer, take your inspiration from the Just Cause 2 trailer, which is mainly about showing off some fun things that can potentially be done organically with the game’s physics. It fires the interest and gives the player something to aspire to.

Hey. Sony. You may not realize it, but if you’re serious about the PlayStation 4’s motherfucking “Share” button, then the current philosophy for triple-A games is against your best interests. The idea is we’re supposed to share videos of our great triumphs and achievements with “all” our “friends”, right? Well, if triple-A games stay the way they are now, Youtube is going to be absolutely flooded with videos of people all doing the exact same fucking thing, aren’t they? More so than it usually is, I mean.

The Witcher 3 Will End With Three Separate, Playable Epilogues