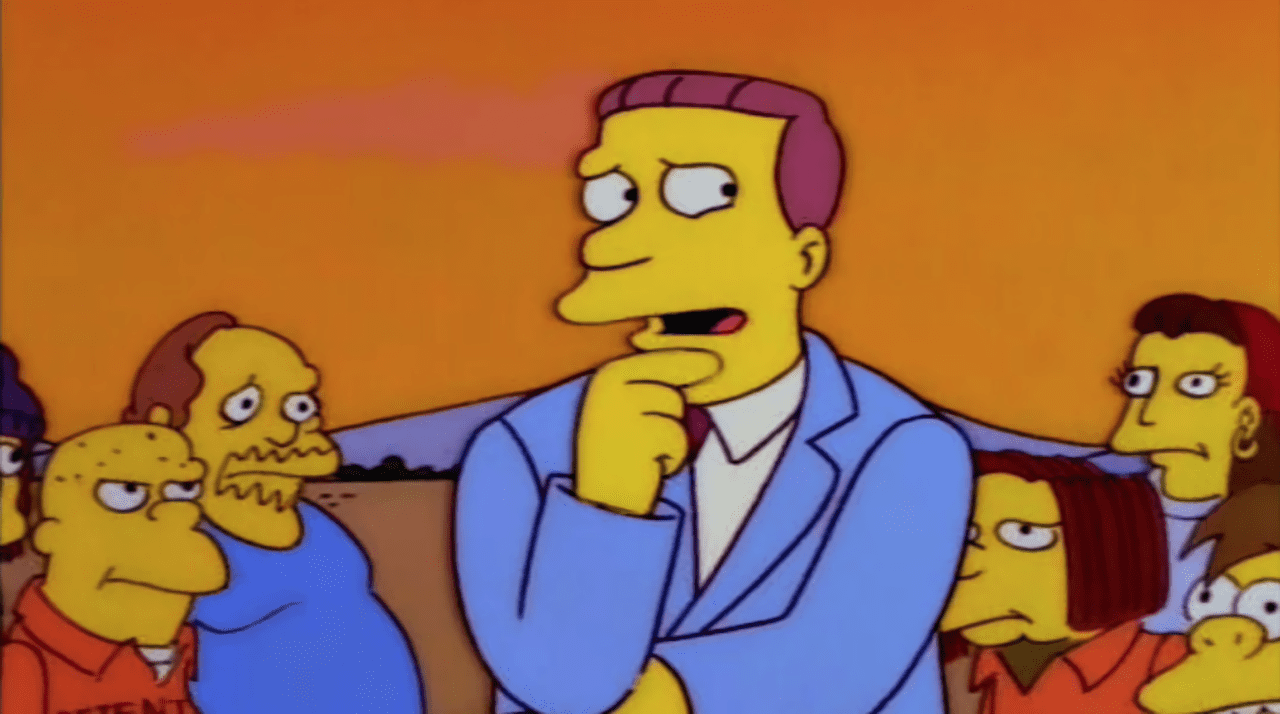 There are a lot of fictional lawyers featured in TV shows and movies. You’re probably familiar with the likes of Atticus Finch, Elle Woods, Perry Mason, and Matt Murdock, and you may even recognize the less popular Josh Segal, Bob Loblaw, Mitch Grinder, or a host of other more obscure characters. But one fictional attorney stands head-and-shoulders above the rest: Lionel Hutz, who first appeared in the second season of The Simpsons as Homer and Marge’s go-to attorney.

What makes Hutz stand out is that he is one of the few fictional attorneys who is unabashedly — and hilariously — incompetent. In fact, Hutz is incompetent in pretty much every way that a lawyer can be incompetent. In one of my favorite scenes, Hutz is presenting an argument to the jury when the judge says, “Mr. Hutz, do you know you’re not wearing any pants?” After jumping up in surprise, Hutz approaches the judge:

HUTZ: I move for a bad court thing.

JUDGE: You mean a mistrial?

HUTZ: Yeah! That’s why you’re the judge and I’m a law-talking guy.

Later, Hutz intercepts the jury’s verdict, and replaces it with one of his own creation. But his fake verdict pronounced his client guilty, was written on a cocktail napkin, and was spelled wrong. I value Hutz’s sheer, unbridled incompetence not just because it is funny on its own terms (though it surely is that), but because it represents a substantial departure from the way lawyers are normally depicted in TV and movies.

Lawyers have a difficult job, and it is virtually impossible for an attorney to perform optimally. There is almost always a more effective way to present an argument, a better strategy to advance, or more research that could be done. But you wouldn’t know that from the way lawyers are portrayed on TV and in the movies. In Legally Blonde, Elle Woods goes from a 143 on the LSAT (bottom 20%) to a 179 (top .01%) over the course of a single brief montage, most of which shows her not not actually paying attention to her studies.In Daredevil, Foggy Nelson literally makes up his opening statement on the fly and presents it to great success. Even Law & Order, a show whose very premise is based on showing semi-realistic court proceedings, gives short shrift to the large amounts of time spent preparing for arguments and writing legal briefs. Needless to say, that’s not how the real world works. As a result, it is extremely satisfying to see Hutz fumble through legal proceedings without a clue as to what he is doing.

Lionel Hutz is an incompetent advocate, but that’s not the worst thing about his performance as a lawyer. He also violates pretty much every rule in the book when it comes to ethics. While it may not be common knowledge — especially given the news of the day — lawyers are bound by a strict code of ethics in both their personal and professional lives. The guiding standards are set out in the American Bar Association’s model rules of professional conduct. In order to practice law, all aspiring attorneys must take a course on the rules while in law school, pass an ethics exam, and submit to an investigation into one’s lifelong ethical conduct and behavior. While some shows (notably Better Call Saul) grapple with the ethical problems lawyers may encounter, The Simpsons stands out in that it recognizes most of the major ethical rules and shows Hutz flagrantly and deliberately violating them. In his first appearance, “Bart Gets Hit by a Car,” Hutz promises Homer and Marge “a big cash settlement” despite explicitly acknowledging that he was not allowed to make such a promise, arranges an exploitative 50% contingency fee (as opposed to the standard 30%), encourages Bart to lie about his injuries, and enlists a phony doctor to provide false testimony.

But what really makes Hutz’s character stand out is that his ethical failings have consequences. In one exchange, Marge expresses her distaste of Hutz’s approach, and asks “in court, doesn’t Bart have to tell the truth?” Hutz responds “Yeah, but what is ‘truth’? If you follow me.” At trial, Marge is called to the stand and does testify truthfully, causing the Simpsons to lose their case. In a later episode, Hutz represented Marge and Homer and was confronted with a group of “10 high-priced lawyers.” Hutz ran away screaming, leaving Marge and Homer to fend for themselves. They lost the case.

Hutz’s antics are funny not just because they are ridiculous, but also because they contribute to a narrative that shows why ethical advocacy is important. Indeed, pretty much all of Hutz’s losses can be attributed directly to his incompetence and unethical practices. The fact that the moral of the story is delivered through the immoral and incompetent Hutz provides a delightful irony that supercharges the overall message and makes Hutz’s antics even more enjoyable.

There is one other reason why Hutz is my favorite fictional attorney, and that has to do with the circumstances surrounding his departure from the show. The Simpsons is currently in its 30th season. Over the years, it has featured over 450 characters and only a few have died or left the show. Hutz was voiced by Phil Hartman, who was murdered in 1998. The tragedy surrounding Hartman’s death, in tandem with the fact that Hutz only appeared in the show’s early seasons, gave the character something of an elevated status. Many fans — myself included — view the first 10 seasons or so of The Simpsons as the best version. The fact that Hutz’s appearances were limited to those years means that he is indelibly associated with those early seasons.

The influence of Phil Hartman and the Hutz character can be seen in a variety of other shows and characters, including Arrested Development’s Barry Zuckerkorn and Futurama’s Hyper-Chicken. While I would never hire Lionel Hutz as my attorney, he will forever serve as a strong reminder of why I love The Simpsons. He’ll also  help me remember to wear pants each time I go to court.

Star Wars: The Bad Batch Set as a Disney+ Clone Wars Spinoff in 2021