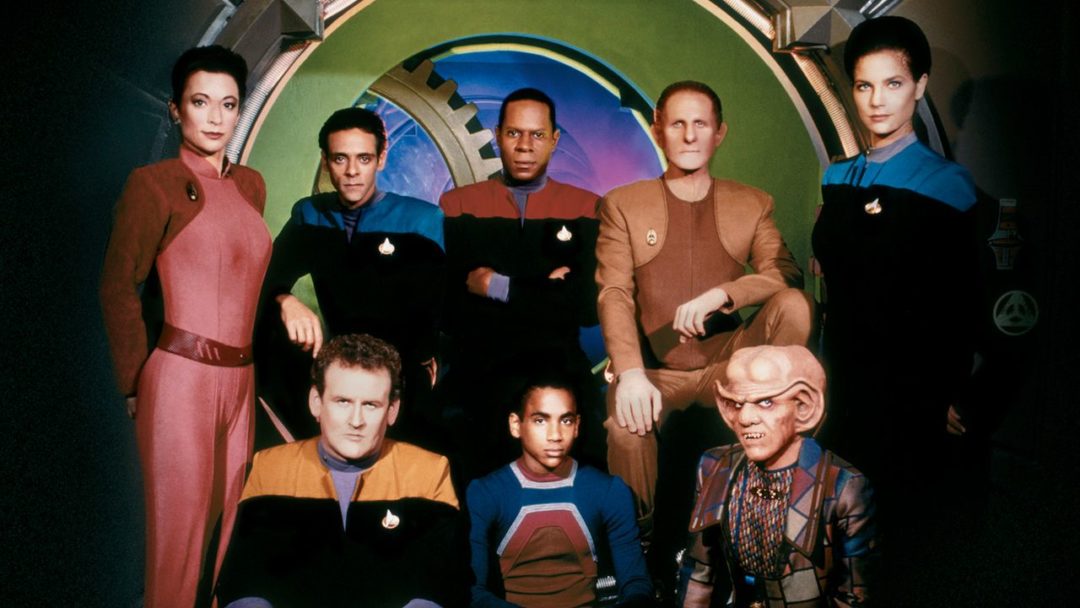 Deep Space Nine doesn’t come to you. You have to go to it.

This is true both of the titular space station — which parks itself alongside a wormhole to the Gamma Quadrant and remains there for seven years — and the Star Trek series that’s set there. Star Trek: The Next Generation’s starship Enterprise takes viewers wherever the action is, serving up loads of old-school Trek adventure to an audience skeptical that the franchise could continue beyond the stories of Kirk and Spock. Gene Roddenberry and his writers gave you more, but more of the same. It had a bigger Enterprise, bigger stories, bigger budgets, and a bigger cast, but it was always reassuring you that this was still Star Trek.

Deep Space Nine provided no such tether to the old and comfortable. The captain is actually a commander, one who wants to quit his job, extorts people in backroom deals, and has the audacity to hate Jean-Luc Picard. The architecture is gray, alien, and oppressive. The locals hate the Federation. Unlike the Enterprise’s best-of-the-best, the station crew appears to be some kind of Island of Misfit Toys. Nobody wants to be there.

For a while, that included Star Trek fandom, which viewed Deep Space Nine with indifference at best and outright hatred at worst. Some disliked the setting, which seemed to remove the actual trekking from Star Trek. Others disliked the tone and content, which incorporated darker themes of war and conflict and moral compromise in seeming defiance of Roddenberry’s utopian ideals. Others balked at the show embracing moderate amounts of serialization, meaning episodes could no longer be easily skipped or viewed out of order.

But over the 20 years since DS9 aired its final episode on June 2, 1999, something happened: the way we watched television changed. In 2007, Netflix introduced their streaming service, and Deep Space Nine started to thrive.

In the olden times, the only way you could keep up on your favorite shows was by being home when they aired, or by setting your VCR to tape the show for you (a task which, if the stand-up comedians of the era are to be believed, was impossible for a normal person to do correctly). If you missed it when it aired, your only chance at catching it again was during reruns which were usually played out of order, over the summer, around 3 a.m.. If the episode was crucial for understanding what came after, then your only choices were to just press on and try to figure out what you missed as you went, or to bail on the season and hope that you could find a way to catch up over the hiatus. This meant that for much of its run, Deep Space Nine shed viewers to either the waning seasons of The Next Generation, or the easily digestible and continuity free adventures of Star Trek: Voyager.

The streaming era has revealed that while Star Trek has always been forward-looking in its attempts to tackle such weighty topics as race, war, and poverty, Deep Space Nine was predicting the future Golden Age of Television. One of the key writers of DS9, Ronald D. Moore, went on to write for Battlestar Galactica, which helped usher in our new era of prestige TV by refining much of what had started on Deep Space Nine.

Many of the most divisive elements of the show seem tailor-made for television today. Fans in the ‘90s decried Avery Brooks’ Commander Sisko as being antithetical to the vision of Star Trek, but he foreshadowed the complicated main characters holding down the center of such modern shows as Mad Men, Breaking Bad, and The Sopranos. A study in contrasts, Sisko is a warrior in a universe that abhors war, a loving father in a career not conducive to fatherhood, a messiah figure that doesn’t believe in religion, and a man of strong emotions in a franchise that insists humanity has evolved beyond such things. But Sisko sits apart from modern TV antiheroes in that there isn’t anything anti about his heroism: despite the tough choices he makes throughout the series, Sisko remains a good man who is, in retrospect, every bit the model of a Star Trek captain.

The show’s frequent dabbling in religion was also decried at the time. In the pilot episode, Sisko discovers he is the “Emissary” of the Prophets, a race of godlike beings that exist outside of time and serve as the deities watching over the planet Bajor. Star Trek is no stranger to godlike beings, whether they’re Q, the Squire of Gothos, the Caretaker, or even Wesley Crusher. But Deep Space Nine treated the Prophets’ divinity ambiguously, which riled up the atheist contingent of the Trek fanbase that likes to believe humanity will evolve beyond religion. By making the gods of Bajor tangible entities, the show was able to explore the intersection of religion and politics in a way that mirrored the real world while avoiding the usual Trek approach which would have made the Bajorans seem primitive for believing in the Prophets. After all, if it walks like a god and quacks like a god …

One of the things that makes DS9 particularly arresting today is how it handled terrorism just a few years before 9/11 would irrevocably change the discourse on that topic. Here the terrorists are the good guys, freedom fighters who bombed a mixture of military and civilian targets to chase away the occupying Cardassian forces. While Moore did continue to explore some of these themes in later seasons of Battlestar Galactica, on Deep Space Nine the terrorists were unabashed heroes, and the word “terrorist” was typically uttered as a mark of pride. It’s safe to say that aspects of this show couldn’t be made today, which is what makes it so valuable — terrorism has become too much of a hot-button issue for a nuanced portrayal that shows conflicts are often just a matter of perspective.

With seven seasons, Deep Space Nine had plenty of time to cover all sorts of topics that other Star Trek series barely addressed. The writers confronted American society and poverty in the two-part episode “Past Tense,” racial discrimination in “Far Beyond the Stars,” and dabbled in same-sex relationships with “Rejoined.” By modern standards, “Rejoined” is fairly tame, and the writers themselves say they failed at LGBT representation. But it’s still one of the strongest entrants in the category until Star Trek: Discovery’s inclusion of a married gay couple as part of the main cast in 2017.  Other DS9 episodes like “Duet,” “The Visitor,” and “In The Pale Moonlight” rank among the finest hours of television Trek has ever produced.

“In The Pale Moonlight” also ranks among the most controversial episodes Trek has ever done, having Captain Sisko narrate his descent into extortion, bribery, and serving as an accessory to murder in an attempt to save the Federation from being wiped out. While some saw the writers as taking risks and adding realism to the Trek franchise, others thought they disrespected the memory of Gene Roddenberry. It’s up to you to decide. But if you think the writers of Deep Space Nine hated Star Trek, it’s worth mentioning “Crossover,” the episode that revisited the original series’ Mirror Universe decades before Discovery, or “Trials and Tribble-ations,” an extended love letter to the history of Trek. No other series in the TNG era revisited so many characters, plots, and locations from the original Star Trek with a fan’s eye for detail.

A few weeks ago, What We Left Behind played in theatres for one night only. The documentary about the making of Deep Space Nine gathers together the cast, crew, and writing staff of the show to talk about being the redheaded stepchild of the franchise. Alexander Siddig, who played Doctor Bashir for the show’s entire run, had the most relevant quote of the movie. “We’re famous now, there’s a ton of people downstairs,” he said, referring to the audience gathering for the cast’s appearance at a fan convention. “They love the show. It just took ‘em 20 years to get here.”

Because that’s the thing about Star Trek: Deep Space Nine. It doesn’t come to you. You have to go to it.