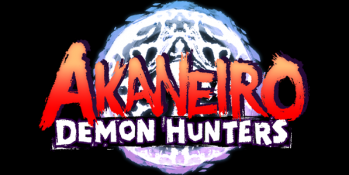 Akaneiro: Demon Hunters is American McGee’s twist on the legend of Red Riding Hood, and it is twisted indeed. This version of the old tale is set in a fictionalized feudal Japan, and our heroine, far from being a helpless waif in the woods, is a member of the Order of the Akane, an ancient and elite sect of demon hunters. The game begins in a land overrun by Yokai – monsters of Japanese folklore – whose malevolent influence has corrupted creatures including the once-peaceful wolves and turned them against the people.

You can play as either a male or female demon hunter – female is the default, naturally- and specialize in either Prowess, Fortitude or Cunning, which loosely correspond to a focus on offensive, defensive and ranged combat. Each class begins with unique bonuses but can access all the equipment and skills the game has to offer, and although the skill tree is relatively tiny, that openness and simplicity allows for a considerable degree of flexibility without forcing players to sweat too much over the minutiae of character builds.

Gameplay is very typical Action-RPG. A small village occupied by the usual sorts of vendors serves as your base of operations and when you’re ready to hunt, the Deckard Cain-like Bounty Master will set you on your way to one of eight unique locales, each divided into three areas of variable “threat levels” that change depending on whether, or when, you last cleared them out. It’s a system that makes the inevitable grind of farming a little more palatable, because you’re not stuck at a particular difficulty level; you can earn substantial rewards by muscling through early levels at maximum difficulty while continuing to advance through new levels at a much lower challenge.
Combat is the usual business of “click to clobber,” but unlike most Action-RPGs there are no potions to quaff when things get ugly, so repeatedly restoring your health as you stand your ground against an enemy onslaught isn’t an option. Instead, health restoration comes from “karma shards” collected from containers and fallen enemies, as well as through certain skills and specialties. It can be frustrating at first, especially for the lightweight Cunning class, but things smooth out considerably after you’ve got a few levels under your belt. Enemies tend not to be particularly bright and although that’s nothing new for the genre, they can be spectacularly clueless in Akaneiro; you’ll sometimes find yourself pounding on a bad guy while his pal is just a couple steps away, apparently oblivious to your violent intrusion.

Akaneiro‘s setting and art style are inspired by feudal Japan, offering a muted rendering of Japanese mythology described accurately by one player as a “playable painting.” It’s stylized, bold and very pretty, and while it’s hardly cutting-edge, the detail and effects are nonetheless impressive and a nice change from the conventional fantasy realms so often seen in role-playing games. Sound effects are a bit on the sparse side, but the soundtrack of traditional Japanese music complements the visuals very nicely.

The game can be played through a web browser or a stand-alone client and the two are almost indistinguishable, except that the browser version suffers far more from Akaneiro‘s greatest weakness: lag. Because it’s an online game, with all the important business handled by a remote server, your gameplay experience is very subject to the whims of lag, slow connections and server issues. Loading a single level can take well over a minute – which is a lot longer than it sounds when you’re waiting for your game to start – the delay between swing and impact can be anywhere from virtually non-existent to a full second or more (although pauses of that length are quite rare) and sooner or later you will be killed by a lag spike. You may also find yourself in the frustrating position of losing earned experience because of a server disconnect; experience isn’t awarded until you’ve completed a mission, so if you get dumped just before you strike the final blow against the boss, it all disappears into the ether.

The term “free-to-play” tends to conjure thoughts of “pay to win” (or “free to suck”) but in this regard Akaneiro seems to have found the sweet spot between giving a leg up to those willing to pay while not putting the screws to people who don’t. Karma not only restores health, it also serves as the in-game currency, used for everything from buying and selling items to reviving your character after death, unlocking new areas and removing level caps. You can buy karma in amounts from $5 to $20 if you want to ratchet up your skills and equipment in a hurry, but the game is perfectly playable without spending a dime. You’ll have to grind a bit if you don’t want to pay, but the variable difficulty levels in each area and the commensurately higher rewards keep things moving ahead at a decent clip, so unless you blow your karma extremely injudiciously, you won’t need to spend hours hammering the same levels over and over again.
Despite being in full release, Akaneiro is still very much a work in progress. Crafting and co-op play, both added to the feature list thanks to the successful Kickstarter, haven’t yet been implemented, enemies are still being balanced, the chat in the stand-alone client doesn’t work and player records aren’t being tracked. Foreground objects like trees don’t always go sufficiently transparent when they block your view, leaving you unable to see what you’re doing or who you’re smacking around, and there’s currently no manual or in-game guide aside from a link to the Spicy Horse forums. There are also rare bouts of general wonkiness, usually attributable to the game’s browser-based design: your cache didn’t clear, your buffer didn’t buff, that sort of thing – frustrating, but not game-breaking.

Even so, Akaneiro: Demon Hunters as it stands is a solid Action-RPG in a pleasingly unique setting, made even more appealing by its great potential for future growth and improvement. And it’s free! If you have any interest in the genre at all, there is absolutely no reason not to try it, and you may find yourself pleasantly surprised when you do.

Bottom Line: Akaneiro: Demon Hunters is no Diablo III, but it’s a surprisingly robust experience and proof that free-to-play gaming doesn’t have to be second-rate.

Recommendation: Check it out! It’s free, after all, and unless you have a deep-rooted dislike of the Action-RPG genre, it’s more than good enough to be worth your time.