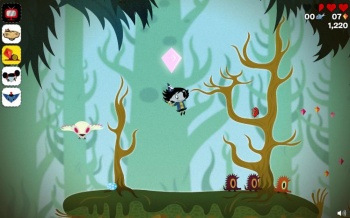 The first thing I noticed about Scarygirl – before I even played the game – was the art style. I mean, you have a little girl who looks like Jack Skellington but who wants to look like Jack Sparrow (and really, she’s not “scary” so much as she is … kind of creepy-cute), you have octopi with hammers and strange, giant-eye birds, and mountains that wear hats. The second thing I noticed about Scarygirl was that it has the best production values that I have ever seen in any browser game, ever – we’re talking pre-rendered cinematics, here.

Scarygirl, as described on the official site by creator Nathan Jurevicius, is “a psychedelic, dream-like composition of heartfelt stories and reinterpreted folklore based around a cute but slightly odd little girl and her giant octopus guardian.”

In practice, it’s a hybrid between a classic adventure game and a platformer, though there are puzzle elements, vehicle segments, and … well, it has a lot, okay? The gameplay is fairly standard fare for a platformer – jump, swim, and spin your way through the worlds, collect lots and lots of items, etc. – but it’s the game’s aesthetics and the fantastic production that really sell it. Once you’re having a dotted-line conversation with the giant octopus that has a full head of hair and is wearing a tiny little Trilby hat, you’ll see what I mean.

The bizarre and compelling Scarygirl aesthetic really bring to mind games like Psychonauts and Grim Fandango, so if you like that sort of thing you should give this one a try. There are 14 levels to get through as well as a few entertaining minigames to play, but thankfully you can also save your progress and come back to the game later.

In the end, Scarygirl feels almost too ambitious – too good – to just be a browser game. It’s something I’d almost expect to see on XBLA or PSN, even. The high production value can be chalked up to financial support from the Film Victoria Digital Media Fund, so… let’s hope people take this lesson to heart, and realize that browser games can be ambitious and awesome, as long as they have the proper funding.

I’d totally buy one of those miniature Scarygirl figures, too. Here’s hoping…

Scoop Up Some Marvel vs Capcom 2 Rumors