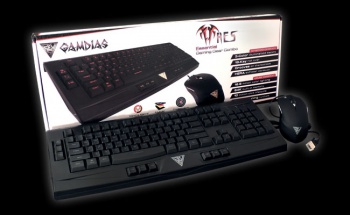 When it comes to entry-level gamer gear, price is a big factor. GAMDIAS‘ combo bundle ARES Essential Gaming Keyboard and OUREA Optical Gaming Mouse seems to have the right price, but do these peripherals have the quality and features to satisfy a gamer’s needs?

First off, typical membrane keyboards employ three-layer plastic membranes, while the ARES uses a four-layer structure. GAMDIAS claims this is for added “robustness,” but after some research, it’s not clear to me that this is truly necessary or even beneficial in any way.

In a typical membrane keyboard, when you press a key, the first layer of plastic squeezes down onto the layers beneath it. The second layer of plastic has a hole in it where the keys reside, allowing the first layer to directly contact the third layer when a key is pressed. When the first and third layer come into contact, this completes an electrical circuit and the computer registers a key stroke. The purpose of the middle layer is to prevent the top and bottom layers from contacting when the key isn’t depressed, so I suppose an additional middle layer would… add more resistance to key presses? Prevent accidental keystrokes? Increase longevity? Again, it simply isn’t clear what the benefit is.

Still, it doesn’t seem to detract from anything, so I’ll concede that it at least isn’t a negative. The keyboard types as you would expect a membrane keyboard to type, apart from the spacebar, which was especially mushy for me. I must say that I have been accustomed to using mechanical keyboards for years now, but even so, the resistance on the ARES’ spacebar in particular felt odd enough to handle that it threw off my typing. 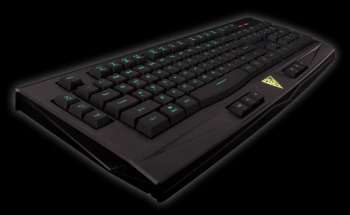 But that’s about the only negative criticism I can level against what is otherwise an impressive product for its price point. The ARES is backlit, with three colors to choose from and an added key that lets you toggle between them or even automatically pulse through the colors. It features anti-ghosting capabilities with 19-key roll over, meaning you can press just about any combination of keys without losing keystrokes, which can happen on other membrane keyboards. Hidden beneath the keyboard are special grooves for cable management of not just the ARES, but for your other peripherals as well, allowing you to keep your desk tidy. Six easy-access thumb keys can be found beneath the spacebar, duplicating the function of the F6 through F11 keys, which can be assigned macros through the downloadable software.

Other features that are nice to have but were of no particular utility to me include a toggle key that lets you swap the function of the WASD and arrow keys (perhaps for left-handed gamers?), a command that lets you lock up the keyboard entirely (so that your cat doesn’t type troll messages to your friends while you’re AFK?), and a key to toggle something GAMDIAS calls “consecutive attack mode,” which can best be explained with an example. Type a bunch of text into a Word document, then hold backspace to delete it all. Type a bunch of text again, but this time enable consecutive attack mode – now, when you hold backspace, you will delete your text much more rapidly. This mode significantly shortens the delay between consecutive key activations when you’re holding down a key. Why? I don’t know, but if you can find a purpose for it, the feature is there. I can’t think of a game in which how quickly you spam a keyboard key beyond millisecond precision is important.

A more obviously beneficial feature is a function that disables the Windows key, which is sometimes accidentally pressed during a heated gaming session, resulting in an unfortunate minimize-to-desktop during a mission-critical moment. The ARES also features a “spill-resistant design,” with four holes to drain any liquid you may accidentally spill on it.

Ultimately, I won’t complain about an additional feature as long as it doesn’t bring up the price point, and even if the ARES has some features that I’ll never make use of, it includes just about every feature a gamer can want in a keyboard for a price that makes me question how GAMDIAS is turning a profit on this bundle. 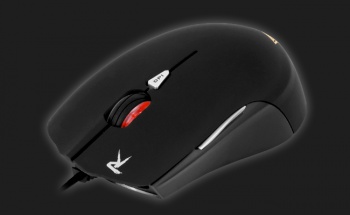 With a 2500 DPI optical sensor, the OUREA may not meet the expectations of tech-savvy gamers, but 2500 DPI is more than enough for most people – in fact, some pro FPS players swear by lower DPI optical sensors. I’ve always been a low-sensitivity gamer, so the OUREA’s lower DPI didn’t bother me at all, but the optical sensor did mean that I had to be more mindful of the gaming surface I used relative to laser mice – the crinkled tablecloth I set my laptop down on had the cursor jittering even without my tremor-prone hand contacting the mouse.

The OUREA sports a selectable polling rate of up to 1000 Hz. If you’re on an older, weak system and want to conserve processing power, you can opt for a lower rate and sacrifice an arguably negligible amount of precision.

The onboard memory allows you to store six separate profiles, each with their own macro assignments and lighting settings. The lighting options are extensive, with plenty of colors to choose from as well as solid or pulsing emission settings. Beneath the scroll wheel is a DPI button, and two additional buttons can be found on the flanks of the mouse, which may be too few buttons for some gamers but is more than ample for me. In fact, I disabled the side buttons, as I generally do, because I have a tendency to press them accidentally.

I absolutely love the ergonomics of the OUREA’s ambidextrous design. It has a smaller form factor and includes a weight tuning system – something I wouldn’t have expected at this price point. I don’t have a large hand, and I can finger- or claw-grip this mouse quite comfortably, which makes it perfect for my FPS gaming needs. I’d love to have this same design in a laser mouse – and a laser version of the OUREA does in fact exist.

Bottom Line: For $55 (on Amazon), the ARES Essential & OUREA Optical bundle offers incredible value per dollar for the budget gamer. This entry-level gaming peripheral combo has all the flash of high-end gamer gear – and even many of the features – at an almost unbelievably low price point.

Recommendation: The ARES Essential & OUREA Optical bundle would make a great gift for someone discovering gaming and is a solid buy for anyone wanting to upgrade from a basic mouse and keyboard to gamer gear.

Pharaoh – Thrive or Perish by The Nile