Brass Triceratops, steampunk Link, even a Twi’lek make appearances in our collection of scenes from the annual gathering of steampunk hardcores. You’re welcome.

What did you do this weekend? Me, I saw a rather tepid monster movie and drank a lot of wine. But if I’d been in New Jersey, I would instead have spent my time hanging out with science fiction fans dressed like clockwork cyborgs, because this weekend marks the 5th annual Steam Punk World’s Fair, in (so I’ve been told) beautiful Piscataway.

I’m bummed to have missed it, but fortunately our own Robert Stoneback has been on the scene, and based on what he’s sent back to us, it looks like a blast. What follows is a collection of incredible cosplay spanning everything from comics and video games to original creations. First up, here’s Cindy Way as Tank Girl, Kyra “Phedre” Felisky as a “Steampunk gunslinger,” and Phil Powell as… fancy dressed up guy?

All photos by Robert Stoneback 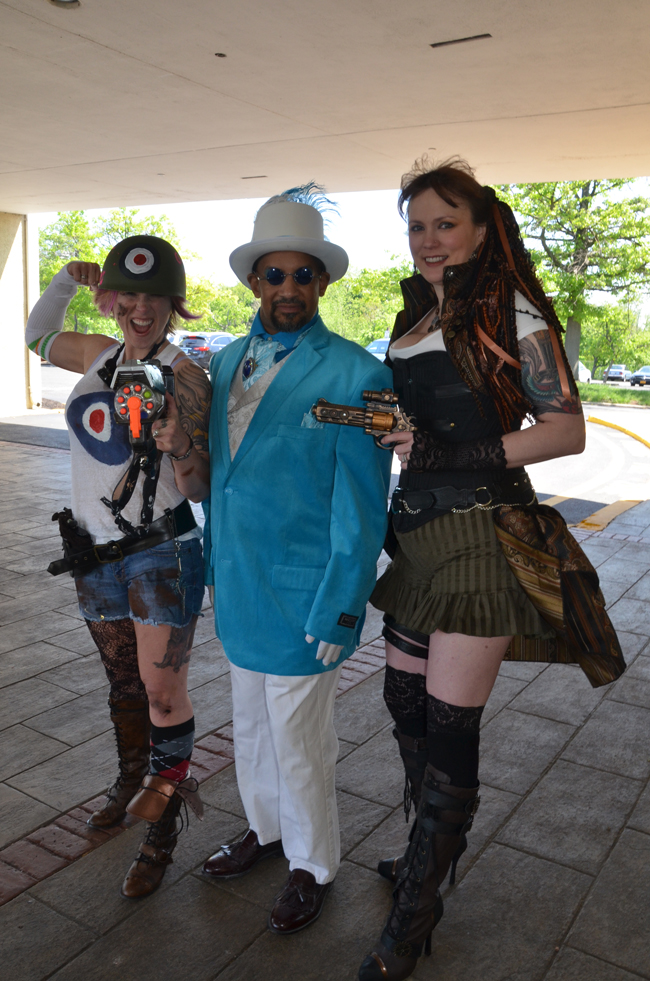 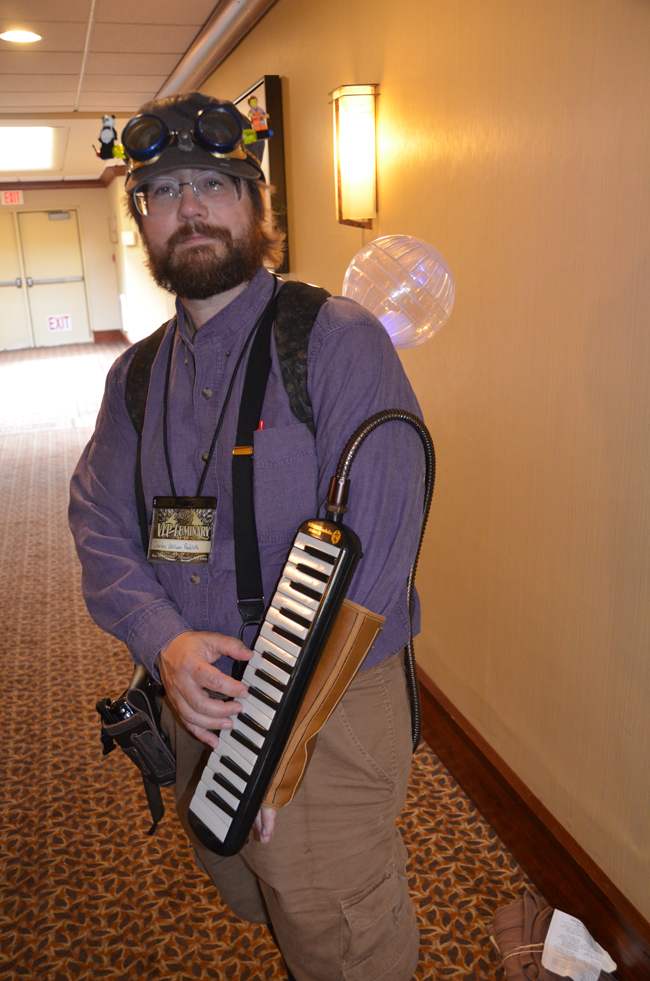 Charles William Radcliffe shows off his steampunk-style arm-mounted melodica. See more of his stuff on Facebook. 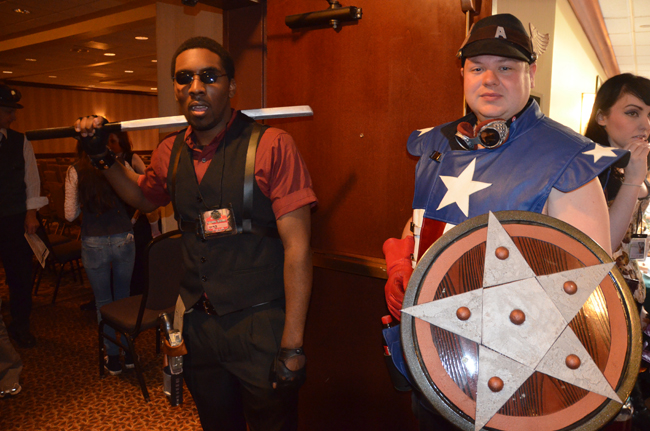 You know what? Steampunk Marvel would probably be a lot less grim than Steampunk DC, and I wannit now. Here’s Greg Browning as Blade and John LaForge as Captain America, defending the Marvel universe from the threat of cholera and rapscallions who confound the local constabulary. 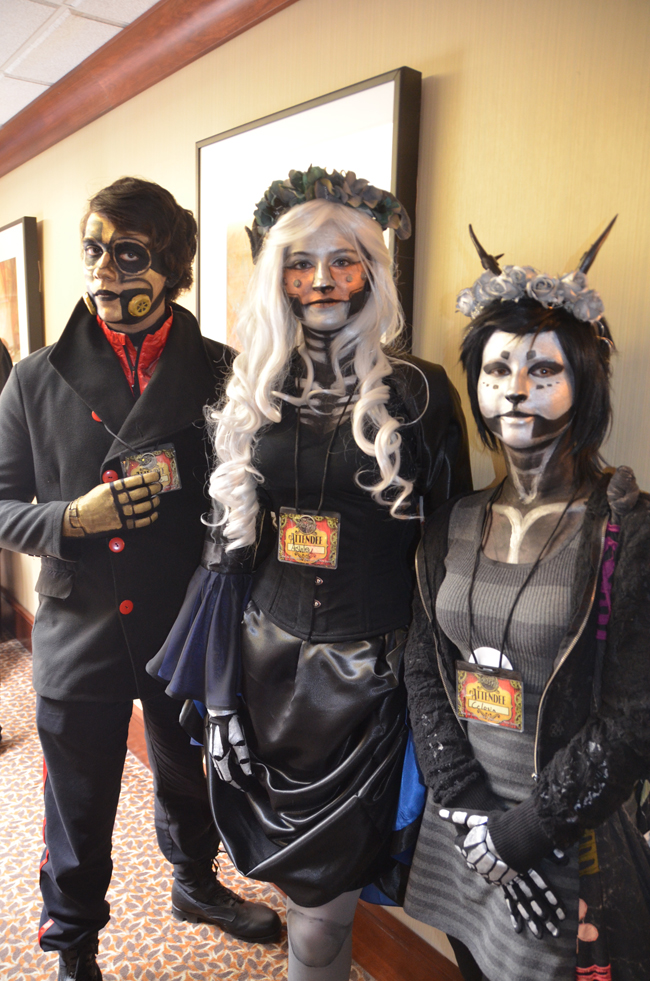 John Schoenewald, Ashley Crowl and Hannah Ruff as a trio of steampunk robots. They’re inspired by steampunk band Steam Powered Giraffe, but I can’t help but think the Oz series is essentially the first Steampunk fiction. I also can’t help but think my observation about the Baumoverse has probably been made by a million people, some of whom will soon mock me for being late to the party. Anyway, these costumes = awesome. 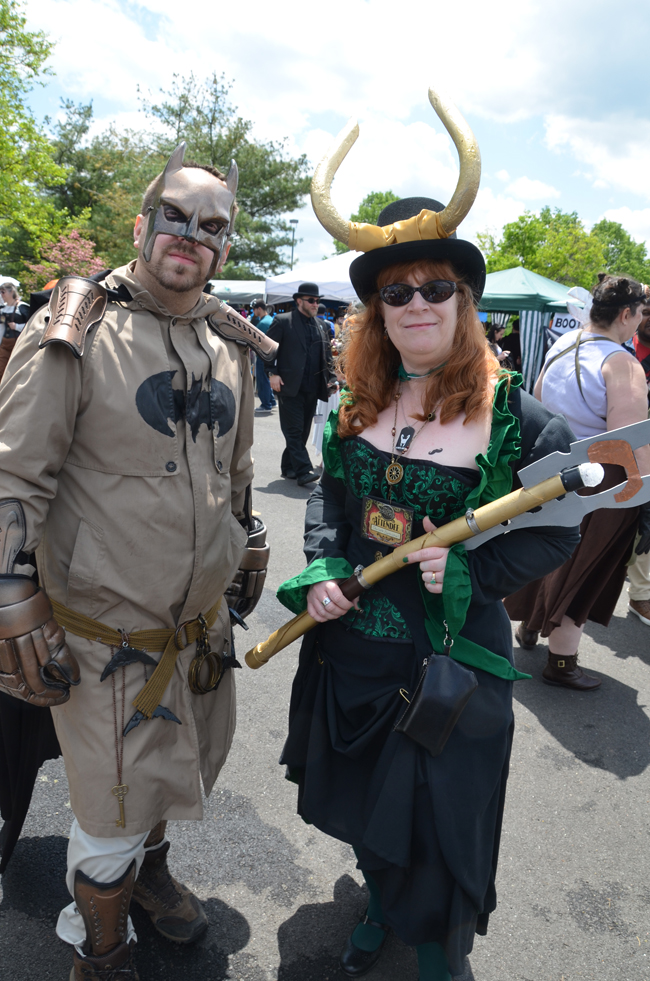 Worlds and time periods collide as Steampunk Batman (Andrew Buxbaum) and Steampunk Loki (Eugenia Martin) cross paths. The best thing about this is that I’m positive no one in the science fictional 1800s would make the same “it’s the [X] Gotham deserves, but not the one it needs right now” joke over and over. 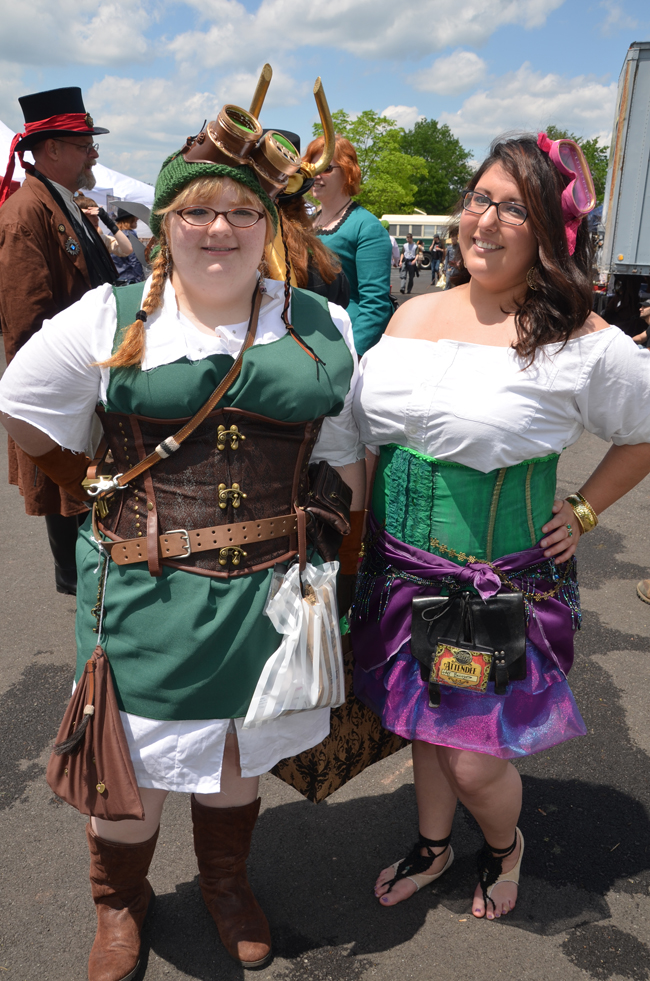 Sarah Ross as steampunk Link and Taylor Benavidez as goggle-wearing version of Disney’s Esmerelda. See more of Taylor’s work on her tumblr. 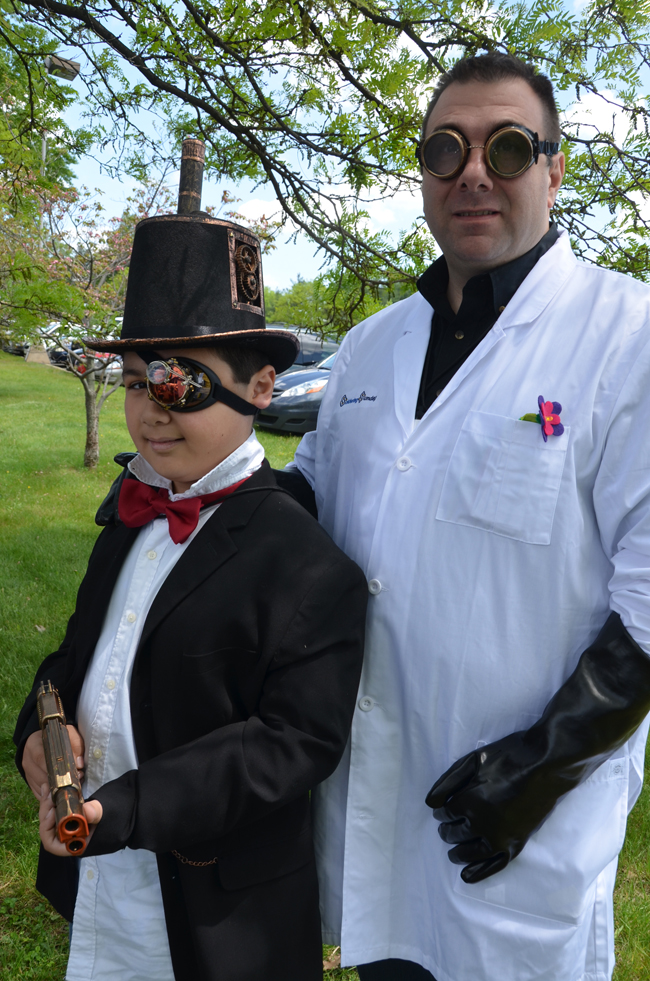 Here’s Paul Michael Gentile with his father Paul Gentile, of SolderingSunday.com, getting gussied up to try and take over the world. 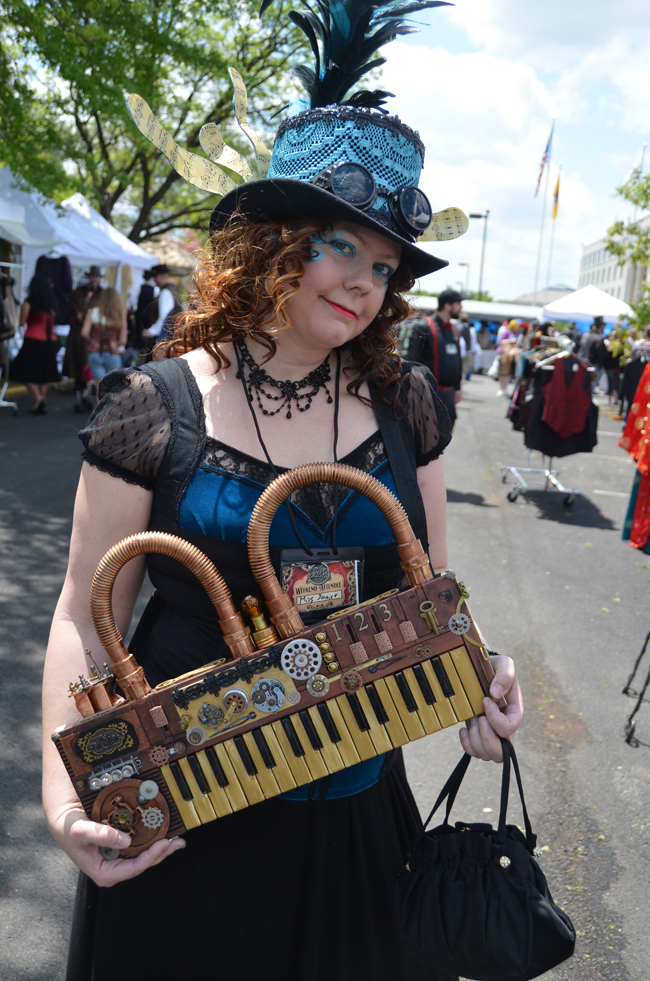 Jan Midgette, with her custom “steam synth.” Is that a Casio sampling keyboard? I think I had one of those when I was a kid. 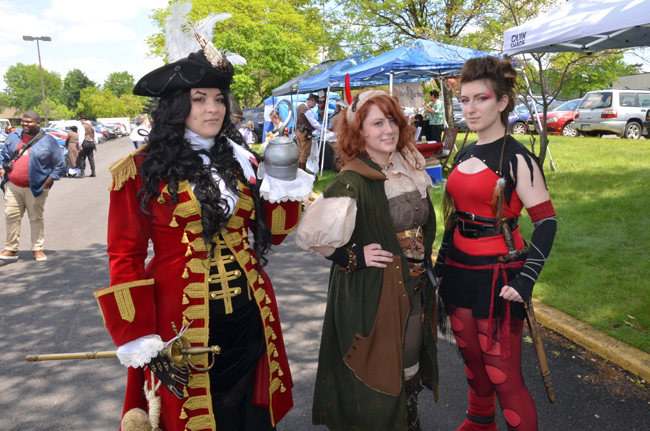 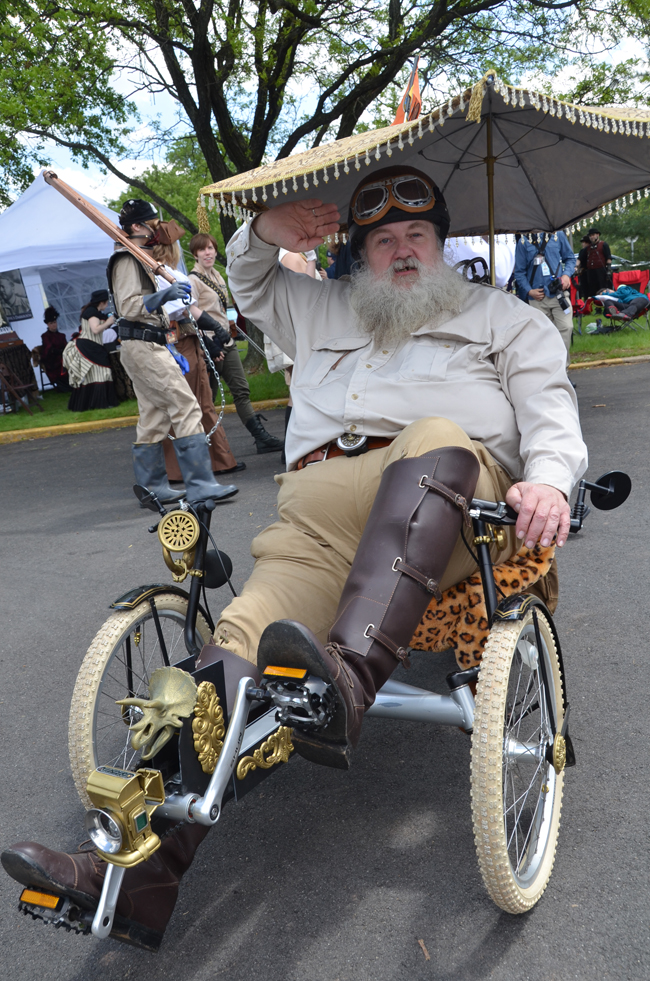 James Macintyre, aboard his “brass triceratops.” Coincidentally, “Brass Triceratops” was my nickname for the Tuba I played from middle school until I graduated high school. 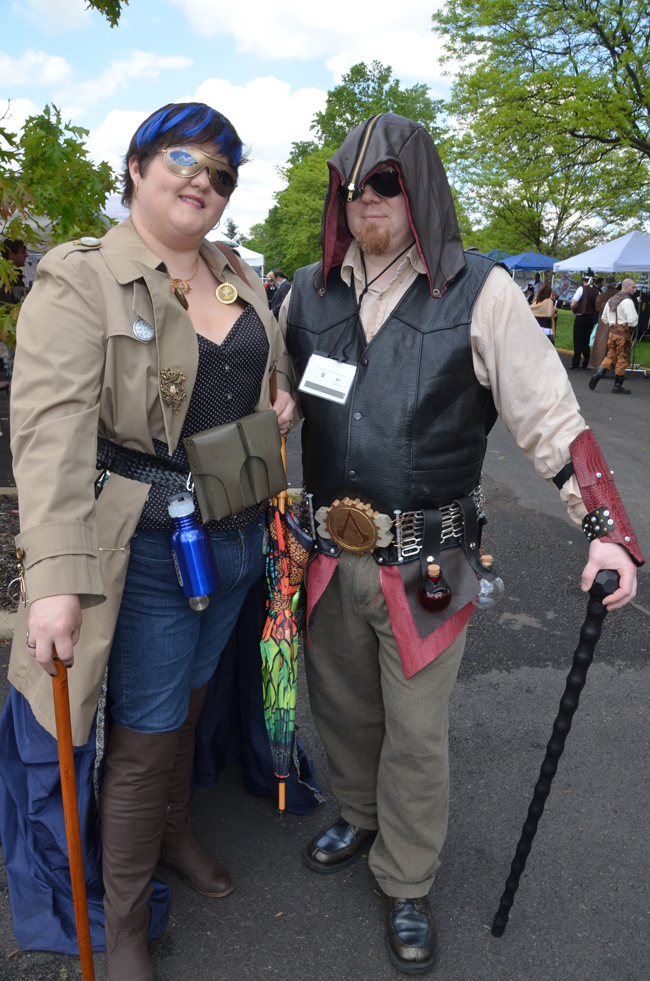 Alicia Downs and husband Tim Downs pose as steampunk versions of The Doctor and a member of the local Assassins Guild. 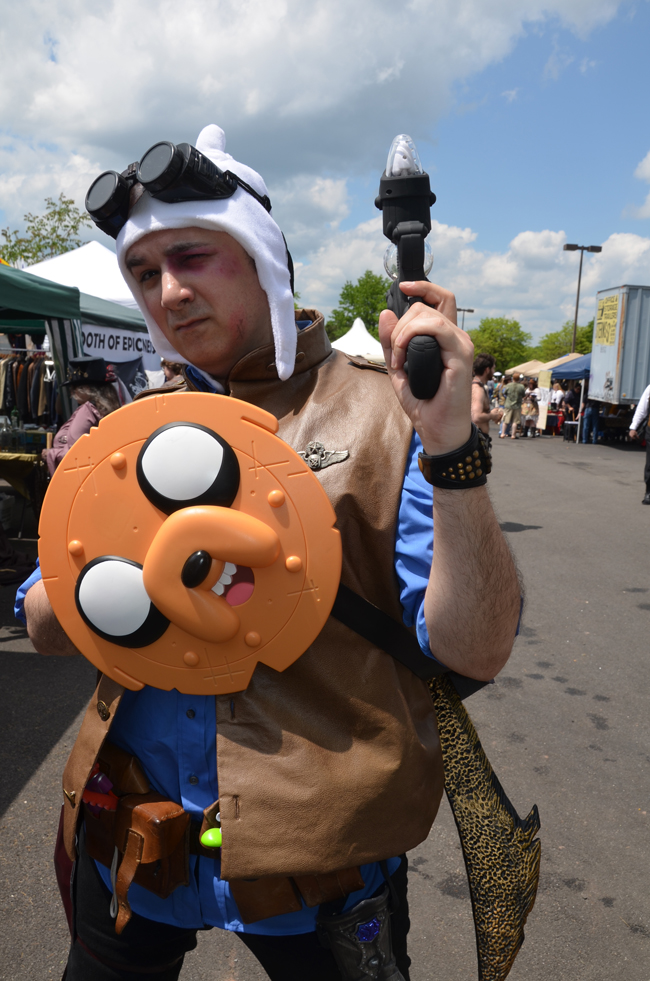 Paul Nomad’s “Jacked Up” Steampunk Finn is a thing of wonder. 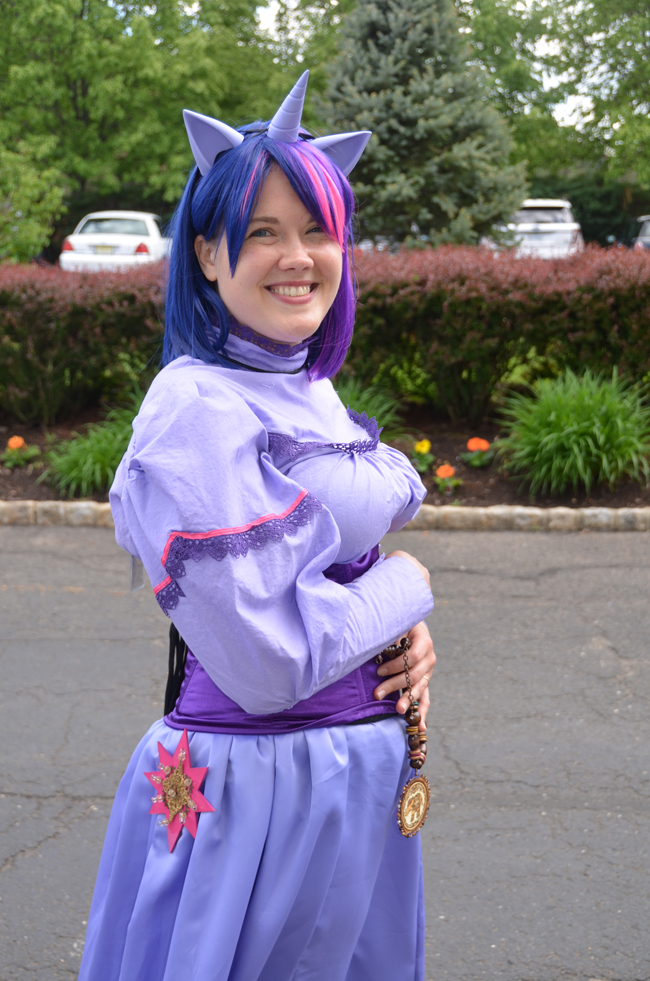 Michelle Greenwood as Twilight Sparkle, from Friendship is Magic. She’s also an artist, and you can see more of her stuff here.

Sidenote: what is a female Brony called? 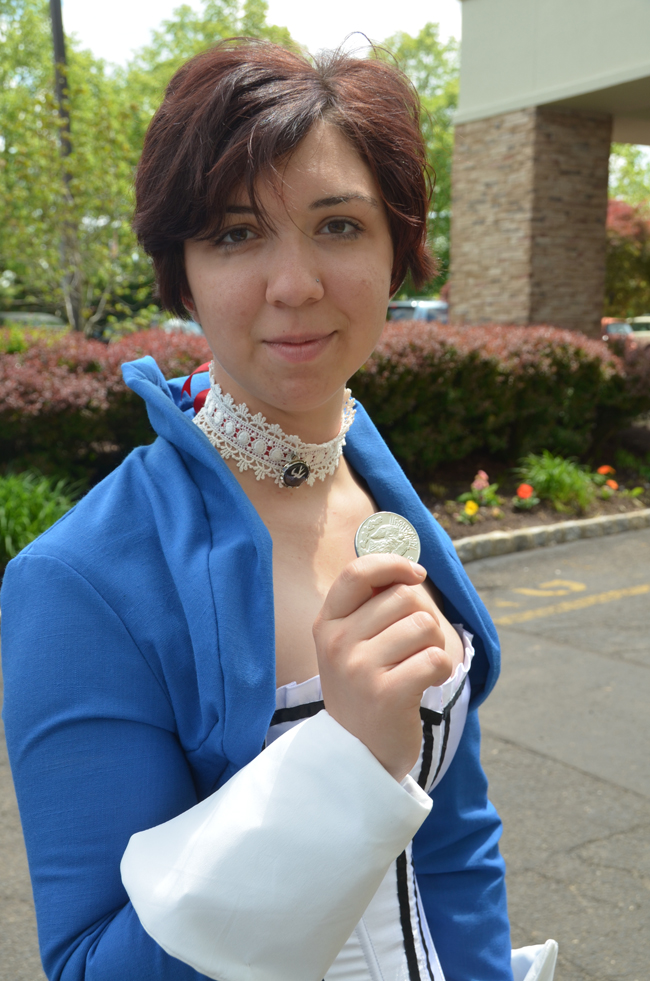 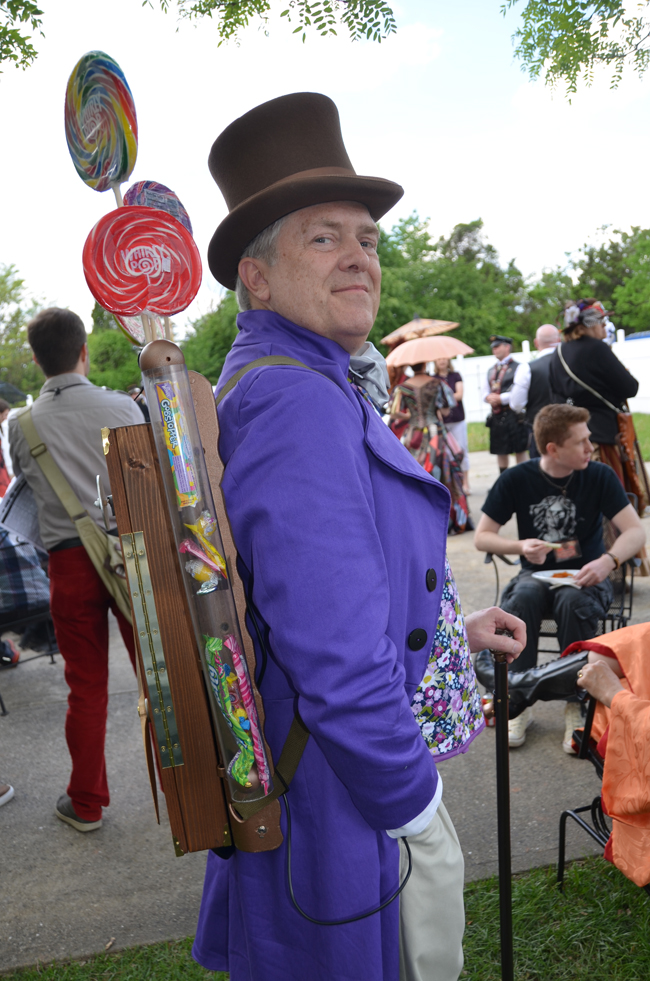 Russ Consaul, as Willy Wonka. I kind of wish he was a Steampunk condescending Wonka, but this will do. 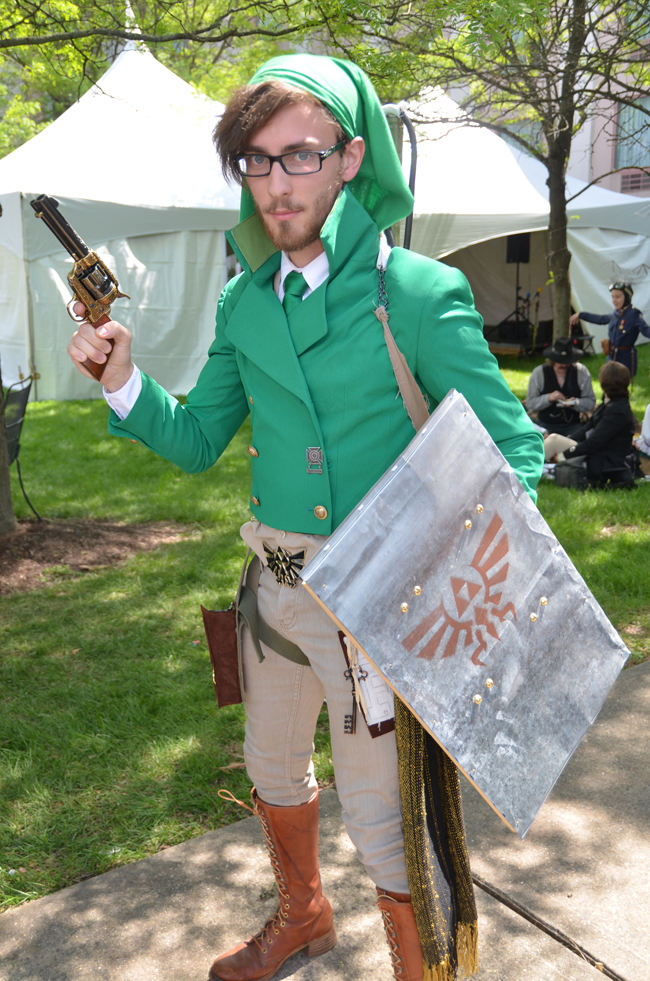 Adam Clarke as another steampunk Link. Maybe Nintendo should be paying attention to this trend. The Triforce could provide the secret of smelting Steel and crushing labor activists I’M KIDDING. 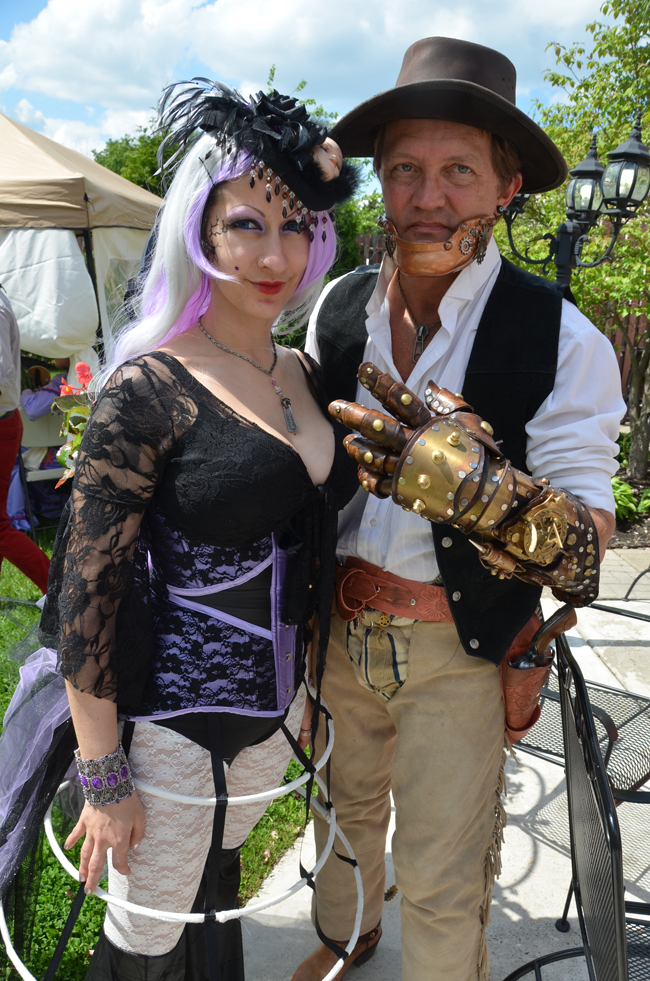 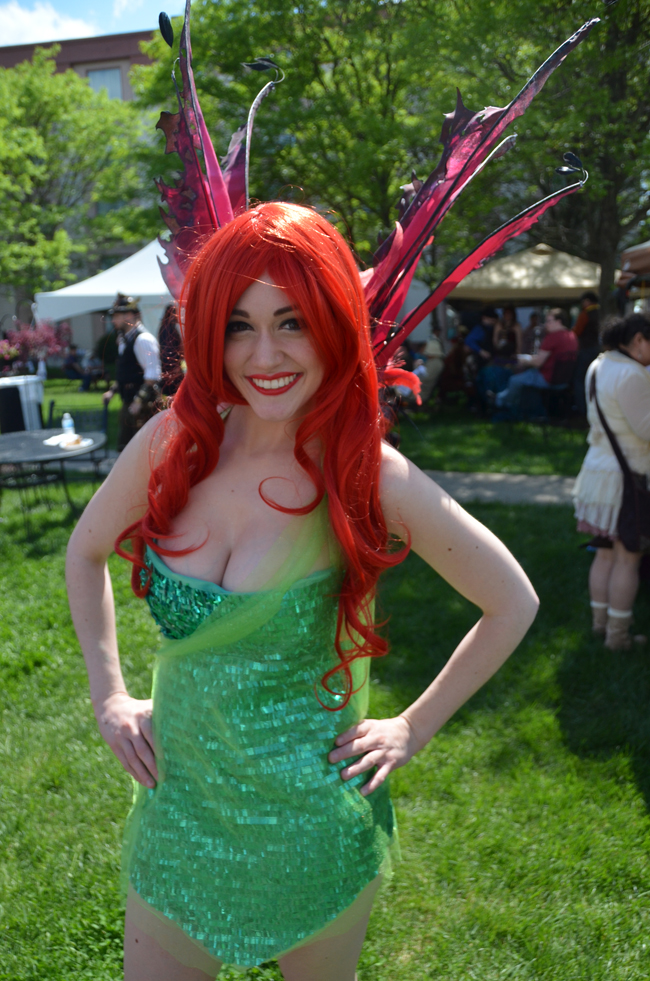 Megan Mattingly as the absinthe fairy from Moulin Rogue. You’ll soon be able to see more of her stuff when GeekGirlsGuild.com goes live soon. 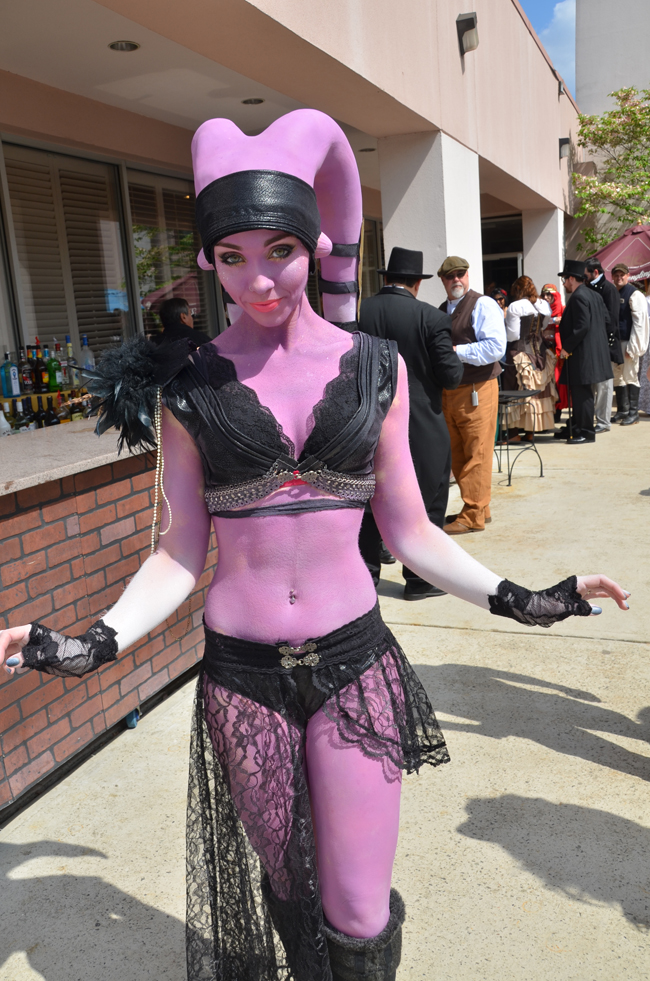 And finally, Paula Flickenschild gives the steampunk treatment to a Star Wars favorite.

Tune back in tomorrow for part two of our Steampunk World’s Fair gallery!