City Building is a favorite genre of mine. I love to lay out careful patterns of roads, provide lovely public transit, walkable routes, and generally create the kind of gorgeous, convenient places I’d love to live in as an alternative to asphalt-sprawl-choked, highway obsessed modern urban development. Cities: Skylines speaks to this very fundamental part of my nature.

Oh, and, I guess, it’s simple and lovely enough that if you’re not obsessed with the same things I am you’ll do really well at it too. 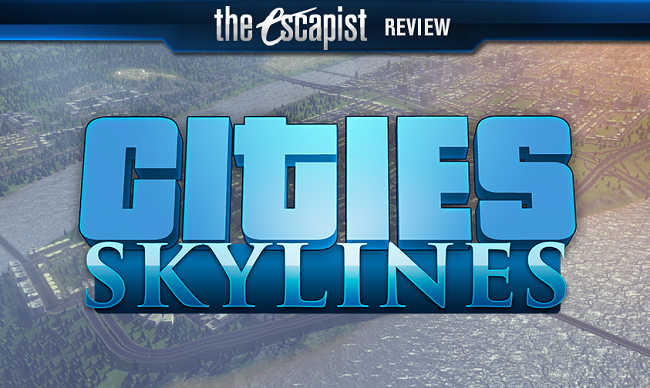 It’s a nice little game from developer Colossal Order, worthy of hours of your time. It has lovely little graphics, available in map flavors from northern european to tropical island, and allows you to live out your dreams of a hyper-taxed socialist utopia with legal drugs and free public transit, or a highly regulated free market hellscape where pets and smoking are banned and everyone only goes anywhere by car. Either way, you’ll have fun planning out a city and executing your dreams. If you’ve felt neglected by the insufficiently complicated city builders of recent years, or felt that older city builders were simply too complex and obtuse for you, then Cities: Skylines is a game worth your time and attention.

In Cities: Skylines you do a lot throwing things at the wall and seeing what sticks. You guide yourself through the interface, laying out roads, optimizing your flow of traffic, zoning new areas, and placing specialist buildings from aquariums to fire stations and universities. The basics of city sims still apply, though. You expand your city by laying out roads of various sizes, from two to six lane, in various varieties – like one way, or with pretty barrier trees and decorations. As your lay road, the game shows gridded areas where buildings can be placed on them. You zone that area as residential, commercial, industrial, or office, with residential and commercial coming in high and low density varieties – think downtown or suburb size. When the simulation is running at one of its three speeds, little people move into your town and build buildings appropriate to the plan you’ve given them. Meanwhile, you hand-place buildings like government services and power plants, tending to the needs of your populace for things like water, power, sewage, and garbage pickup. Later in the game, you optimize a rail system, create routes for your bus system, and construct an underground metro for true convenience. You even build cargo and passenger ports for crate and cruise ships.

Truthfully, the most important thing in your city is traffic management, and those who fail to plan for a modern city with a well designed transit system are in for a world of pain. It’s hilarious, if unfortunate, to watch a line of ambulances held up by a few huge trucks delivering lumber while a bunch of people die at their homes a few streets over. Be aware that if you don’t like managing and optimizing your traffic flow, you’re probably not going to have much fun in this game. The good news? Modern city planning actually works wonders, and finding the right balance of public transit, walkability, and car deliveries is a treat. It’s a soothing experience, not only to see your plans come to fruition but also to laugh as your offhand solutions become traffic-clogged hellscapes requiring the use of ever more elaborate interchanges. The game’s interfaces are all well designed, showing both raw numbers and graphical representations of your city’s need for things like water flow when you bring up the relevant tools. Likewise, there’s a variety of map modes for everything from traffic flow problems to presence of natural resources.

The game’s agent system is lovely, letting you follow a person through the course of their workday, shopping, and trips to and from home. It’s also a great way of following problems to their sources. Got someone complaining about noise pollution? Click on them and figure out where they live and work to find the source – both of which are little hotlinks in the bubble above their head that take you to their home and workplace (as well as their current destination, if you’re so inclined.)

Despite the ease of use, it can be frustrating to find the numbers you’re looking for, and sometimes tracing the root of a problem in your city can be a little obtuse. Want to know why you get so few tourists? Good luck with that. Why’s crime so low? Probably because you have well educated citizens, but the game’s not going to explain it. The game’s system of bubbles and popups above individual houses and citizens lets you know what’s going wrong, but occasionally a problem can get quite out of control before you notice. You have to learn to roll with the punches, and realize that the challenge of the game is recovering from situations you’ve created and sticking with your plan to grow your city – not never losing a citizen to sickness or a building to fire. Those seeking a big challenge will find it behooves them to turn on the game’s included hard mode mod before forging forward, because otherwise the real challenge isn’t in economics, but in optimization – how well can you build and how can you get it working well once you’ve built it? Can you fill up the map, using the total of 9 2 kilometer by 2 kilometer tiles and reaching the cap of one million citizens? Can you meet the challenges to unlock all the unique buildings and thereby build every single wonder? You probably can, if you’re good and have the hundred hours I’d expect it to take for that kind of expansion.

The only other major complaint for many will be Cities: Skyline‘s traffic model. Cars often use the best lane to get to their destination, and don’t overtake others or switch lanes while doing so. You can imagine the problems this creates: Cars lined up for miles in the central lane because they want to go straight four intersections down, while the turn lanes and mixed turn/straight lanes sit empty. That said, Colossal Order has already begun work on the pathfinding system, and during the two week long press period already deployed several patches with fixes, like a completely broken police system that I had a rant all written into this review for and then was forced to delete, and one that improved the pathfinding considerably for traffic circles. Since they come from a background in making transit sims and seem quite committed to providing both fixes and free content alongside their DLC scheme, I think it’s safe to say that fear of unfixed bugs and unimproved systems shouldn’t keep you away from this game.

The game does give you some tools to stay organized, like the novel and clever districting system. Districts can be painted onto the map and given policies unique to the buildings in that area. At their simplest, they’re things like saying that all industry in that area must be farming (to take advantage of natural resource areas scattered across the map), or that free smoke detectors are distributed to buildings in the area. At their more complex, you can ban heavy traffic from a neighborhood, place extra taxes on the wealthy, or begin a smart home program to increase land value and upgrade buildings with solar panels and robots.

The included mod tools are impressive, letting you put together buildings, parks, and road interchanges as you please. It’s nice to be able, even as someone with zero 3d modeling skills, to jump out of your city and custom-make a park that fits the exact space you want to fill with greenery. Similarly, when I was having problems getting a highway interchange to work well, I was able to simply save my city, jump into the mod tools, and make the interchange there with a nice visible grid and no pressure. I then jumped back into the game, slotted in my interchange after some copious bulldozing, and kept playing. It took less than ten minutes.

The game performed well on a variety of hardware, my older gaming computer, running a GTX 660 and a Core i5, didn’t have any problems up to and beyond 300,000 citizens and using a mod to unlock extra building areas the developers didn’t intend. Meanwhile, even my MS Surface Pro 2, certainly never intended to run such a game, managed to do just fine on minimal settings using onboard graphics running an 80,000 citizen city. The Mac version of the game is a little less optimized, dropping frames occasionally on both an 8 year old macbook pro that doesn’t meet the minimum requirements and a two year old graphic design desktop, but both of those ran for hours comfortably and problems were far more rare on the modern machine.

All said, I put about 85 hours into Cities: Skylines in ten days I had it. It’s a fun, fun game and even the little complaints I have about it did nothing to stop my enjoyment of the game. The learning curve is a tiny bit steep at first, but my partner who has zero experience with a city builder was able to make a passable city of nearly 70,000 in ten hours of play without encountering that many stumbling points. The mechanics are easily understood, the goals elegant and open ended in implementation, and the gameplay smooth. Did I mention it’s not a full price game? That it’s only $30?

I did not? My apologies. I have been remiss. You must forgive me.

Now go forth, my child, and build.

Bottom Line: The finest city builder in over a decade, Cities: Skylines‘s few flaws are so minor I only noticed them after hours of enjoyment.

Recommendation: Those with even a passing interest in management simulators and city builders owe themselves a few dozen hours with this game.

Is The Definitive Edition of DmC Worth The Price?

The Current Trend of The Anticlimax in Video Games