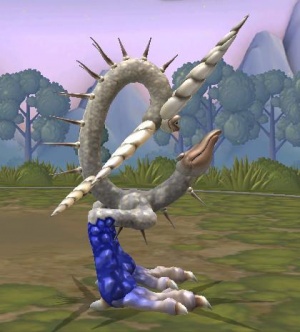 OK, so we’re a bit late in announcing the winners for our Creature Creator contest. But, after an intense amount of deliberation among the team, we have finally selected our favorites.

Coming in at number three, Scypemonk‘s Sir Schmoopy! We look at it, and burst out laughing. Not only is it hilarious, but we figure that if Rob were to design Sir Schmoopy as a Spore creature, he’d totally end up with dual-wielding buzzsaw arms.

At number two, SlayerGhede‘s Yahtzee! It’s really the animations that sell this one – the stilted head tilting and a perfect hat replica just make the whole thing work. The dance is priceless.

And finally, our grand prize winner is Narrator, with his bizarrely creative Escaposaur! Sure, it unmistakeably replicates our logo, and that’s awesome, but the best part is that it does it while also being an interesting and viable creature on its own. You have to check out the video to really appreciate it. This is one we’d love to import into our own game, come release time.

And a special thanks for everyone that entered – we hope you enjoyed creating as much as we enjoyed checking out the creations.

Shamus’s Guide to NOT Getting Your Comic Rejected