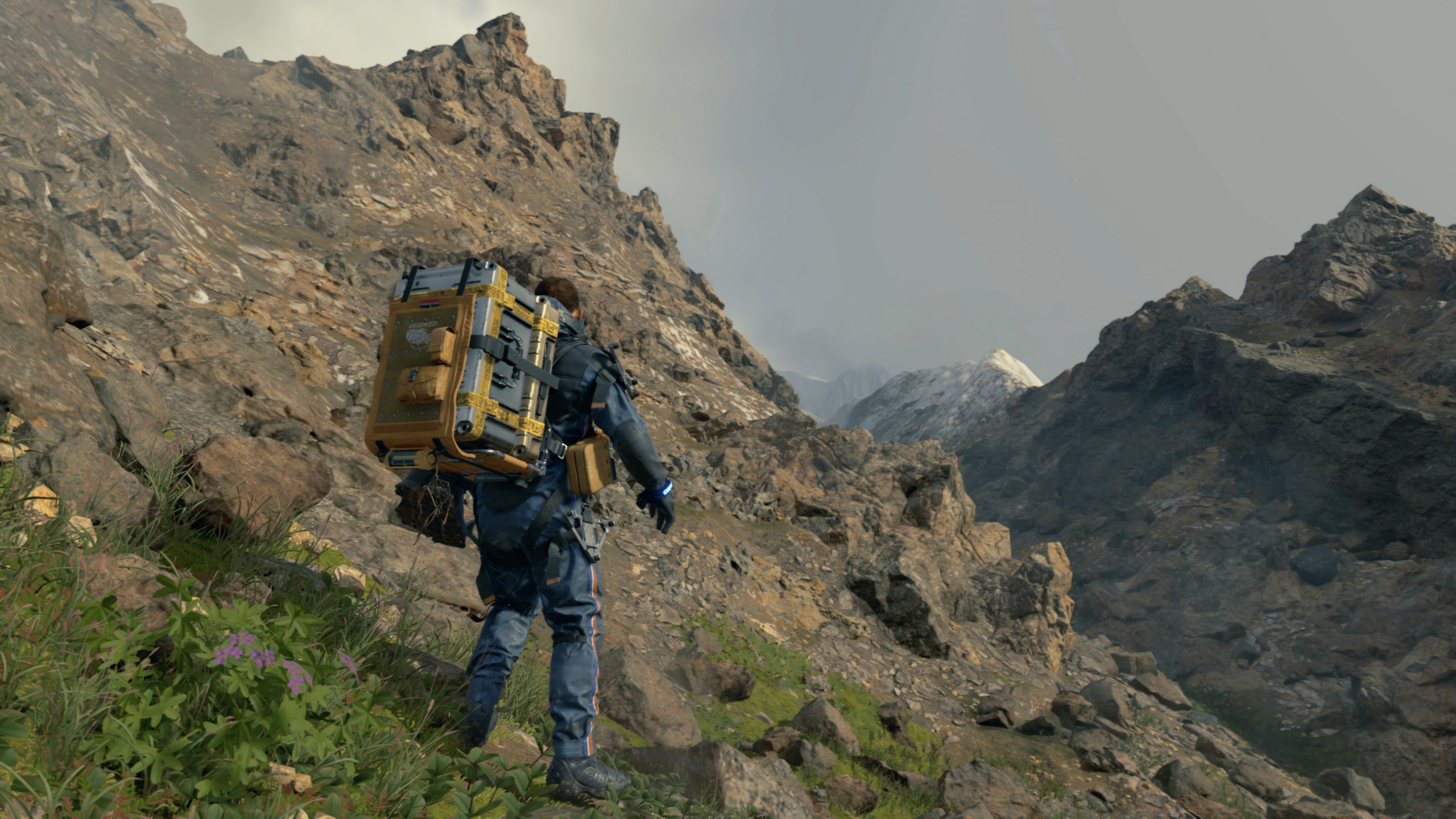 The world of Horizon Zero Dawn is elegantly designed. Its points of interest are placed along winding, scenic footpaths, spaced just far enough apart to naturally generate the game’s desired rhythms of combat and exploration. But the shortest distance between two points is a straight line. When I played Horizon I was constantly ignoring its artisanally designed paths to bushwhack straight from point A to point B. I would ford rivers because the designer-placed bridge was 10 whole meters upstream, and I often used Aloy’s awkward jump to clamber up sheer mountain faces that were obviously supposed to be impassable. It looked stupid and felt wrong, but it was faster than taking the intended route, and there were never any consequences for discarding the reality of the world in pursuit of maximum convenience. Meanwhile, in Death Stranding, the consequences for pursuing that kind of video game-like convenience are stress, failure, and death.

In Death Stranding, bridges are godsends and worth planning entire routes around if they can keep Sam Porter Bridges out of even the gentlest currents. In Death Stranding it would be suicidal to clamber up the sheer side of a mountain instead of taking the long way around to a footpath on its opposite face. In Death Stranding, slow, difficult, inconvenient travel from nowhere to nowhere is the entire game. Death Stranding is the anti-open-world game, and it’s solving a problem that open world games can’t even admit they have.

Open-world games are in a map design Cold War. Open-world environments are getting broader, taller, and denser as hardware gets more powerful and designers get more confident. But most of these games still rely on a modest number of broad activity types — bandit camps to liberate, minibosses to fight, ruins to explore — that they scatter throughout their cavernous maps. This is becoming a problem. As these worlds get bigger, their activities are drifting further apart, necessitating greater amounts of time spent traveling between them. If Assassin’s Creed Odyssey were a cookie, it would be the size of a city block, and its chocolate chips would all be several feet apart.

The solution most open-world games have leaned on is to make getting between activities as convenient and pleasant as possible. Traveling those kinds of distances on foot is slow and dull, so games that require frequent long hauls are quick to offer alternatives. The Witcher‘s Geralt has his horse Roach, Final Fantasy XV‘s Prince Noctis has a luxury convertible and a chauffeur to drive it for him, and the Grand Theft Auto series is named after the thing you can do in them to avoid having to walk. This approach is so common that we sometimes judge these games by how fun they can make getting to the actually fun things, praising Marvel’s Spider-Man, for example, for its enjoyable web-slinging. And if worst comes to worst and you’re stuck hoofing it, they’re only video games, so jumping up the side of a cliff like a mountain goat is fine if it gets you where you need to be.

Any way you go about it, locomotion in these games is always just a means to an end. No matter how enjoyable or unobtrusive it is to shove your digital marionette around their environment, the world map is still signaling that every icon of actual fun must be purchased with a down payment of travel. Environment traversal can have aesthetic value on its own — the smoking battlefields and wind-blasted crags of The Witcher 3 are pleasant just to gallop through. But even the most visually and aurally satisfying open-world travel tends to have minimal mechanical value. If you get Roach up to full speed, she’ll follow the road on her own, removing player interaction from The Witcher‘s travel altogether. It’s the ultimate convenience — a game that plays itself.

Death Stranding brings the thrill back to overworld traversal by harshly reversing this trend. Far from being either a Spider-Man-like pleasantry or a Witcher-esque automated aesthetic experience, travel in Death Stranding requires stressful, prolonged maintenance of a half-dozen interlocking systems. And rather than being discrete chunks of actual gameplay, the points on the map you’re traveling between represent opportunities for Sam to temporarily relax. The traditional values and proportions of open-world games are inverted in Death Stranding — you spend ages engaging with the core mechanics by traveling in order to earn a brief window to do nothing. If Death Stranding were a cookie, it would be one giant chocolate chip with a few bread crumbs on top.

This deliberately inconvenient take on open-world design might be a better solution to these games’ bloat problem than their historical reliance on convenience and fun. The Legend of Zelda: Breath of the Wild has a huge map that’s packed with fun diversions, and getting around it is quick and painless thanks to the ease of taming wild horses and Link’s gecko-like ability to scale any surface. But Breath of the Wild‘s map still has plenty of dead space, vast areas that can technically be accessed but contain none of the game’s icon-worthy activities. Hunting for a spot in the volcanic badlands to awaken one of Link’s dormant memories, I once again found myself clambering around terrain that seemed like it should have been inaccessible. Even when I was going where I was allowed to go, even intended to go, I still felt like I was transgressing against the world design because getting there was awkward and there was nothing up there when I arrived.

I have yet to get that feeling in Death Stranding. Specifically because world traversal is so demanding, and because I’m not expecting to find any pleasant distractions along the way, the world of Death Stranding has remained coherent and sacrosanct. Scaling a volcano in Breath of the Wild was unfulfilling to me because it happened quickly and didn’t offer me anything tangible. But walking in a straight line for 100 meters in Death Stranding feels like a massive accomplishment because it requires careful stamina and resource management and dozens of route micro-adjustments to avoid the kind of minor elevation changes and shin-height obstacles that most game characters pass over with no acknowledgment. Death Stranding can wring more engagement and tension out of a soccer ball-sized rock than Breath of the Wild can get out of a mountain.

There is value in downtime. It’s beneficial to the pace of a long game to provide players with opportunities, even very long opportunities, to unwind and peacefully appreciate the scenery. But these games take dozens or hundreds of hours to complete, and much of that time is spent either mindlessly wandering between the good bits or shattering the illusion of the world to get to those bits via comically direct routes. Death Stranding can make a five-minute walk to the warehouse outside town feel like a gruesome odyssey, and that’s even before it adds in its insane rogue package thieves and tentacled ghosts. We spend so much time in games just putting one foot in front of the other, but Death Stranding is one of the only games to truly value the journey, not just the destinations.

Is Binging Still the Future of How Streaming TV Series Release?

Knives Out Is a Cut Above from Rian Johnson