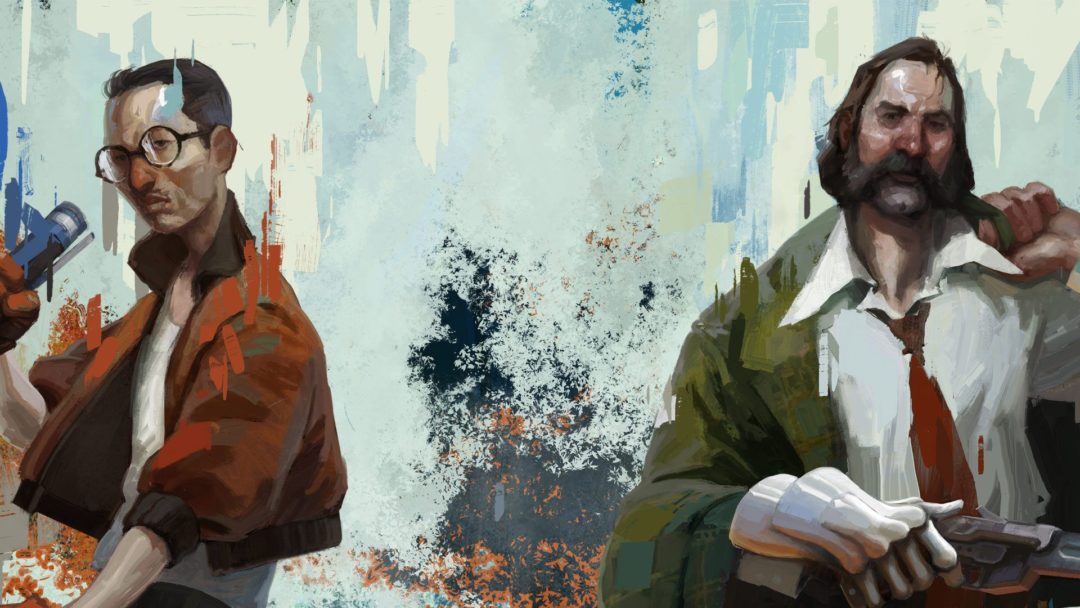 You wake up in your skivvies, face down in a trashed hotel room. You don’t remember a thing, but it doesn’t take a disco supercop to discern that the numerous empty liquor bottles caused an alcohol-induced blackout. However, it’s not just the previous night’s debauchery you can’t remember: You have no idea who you actually are.

Developer ZA/UM’s ambitious CRPG Disco Elysium begins as a detective game about a middle-aged cop with amnesia tasked with solving a murder, but the player’s choices are woven into the core fabric of the narrative presentation. It’s a wild police story, but it’s also one of the most fascinating and engaging interactive exercises in character building I’ve ever experienced outside of pen-and-paper RPGs.

The game begins in complete darkness as you participate in a conversation between your Ancient Reptilian Brain and Limbic System. It’s a weird, creepy, funny, and strangely compelling introduction to one of Disco Elysium’s most unique conceits. Your cop’s innermost attributes and skills manifest as characters themselves, constantly providing input and engaging you in internal dialogues.

The game’s setting mirrors the protagonist’s conflicted psyche. The city of Revachol was once the capital of the world, but it’s now run by an interim government following a bloody revolution. It’s a multicultural hub of activity, albeit one with a widening gulf between the rich and poor, who are heavily exploited by powerful political and business interests.

Even after a few dozen hours of game time, the fictional city of Revachol and its inhabitants continue to deliver deepening mysteries and memorable personal conundrums. The game’s fiction seems to involve a Tolkien-esque level of world-building, making it initially hard to keep track of all of the opposing faction names and ideologies. But everything proves to be exceptionally well thought out and believable. 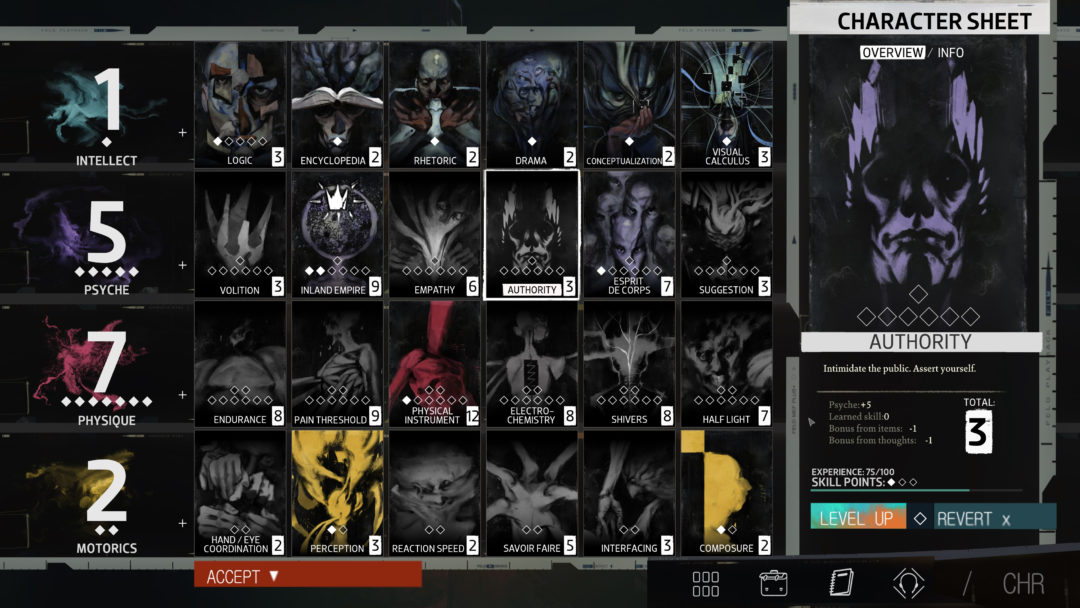 The game’s stellar writers deftly explore heady concepts like metaphysics, redemption, and identity in ways that are decidedly adult, rarely comfortable, genuinely hilarious, and always tied directly to the gameplay. The subjective value judgments you make as a player will impact your character’s ideology and his subsequent interactions with the world.

Disco Elysium is a role-playing game in the truest sense, comparable to beloved genre staples like Planescape: Torment and Divinity: Original Sin II. However, it reinvents and subverts traditional RPG systems — and even invents some fresh ones.

World navigation and exploration is akin to a point-and-click adventure using beautiful expressionist art for the environments and character portraits. You’ll collect clothing and consumables, which confer bonuses and penalties to your stats and affect your character’s morale and health. Smoke a cigarette to temporarily increase your Intellect and deplete your health bar, or drink a beer to puff up your physique and lose a bit of your morale meter because your partner doesn’t approve.

You’ll start off by choosing a pre-made character archetype — Thinker, Sensitive, or Physical — or creating your own. Each of the four primary character stats (Intellect, Psyche, Physique, and Motorics) is associated with six different skills. A few of these are relatively straightforward, like the Physique skill Endurance, which ties directly to your detective’s maximum health.

If you have a high Perception skill from the Motorics branch, your character will notice more subtle things during exploration or conversations. Beef up the Encyclopedia skill from the Intellect branch, and it’ll greatly increase the comprehensiveness of information you receive about people, places, and things during internal monologues.

Many of the other skills aren’t as straightforward. Inland Empire and Shivers skills enhance your character’s internal monologues in surreal and poetic ways, often providing strange, though not always accurate, insight into less literal aspects of the proceedings. Inland Empire allowed me to converse with a corpse and glean some insight unavailable to someone saner. 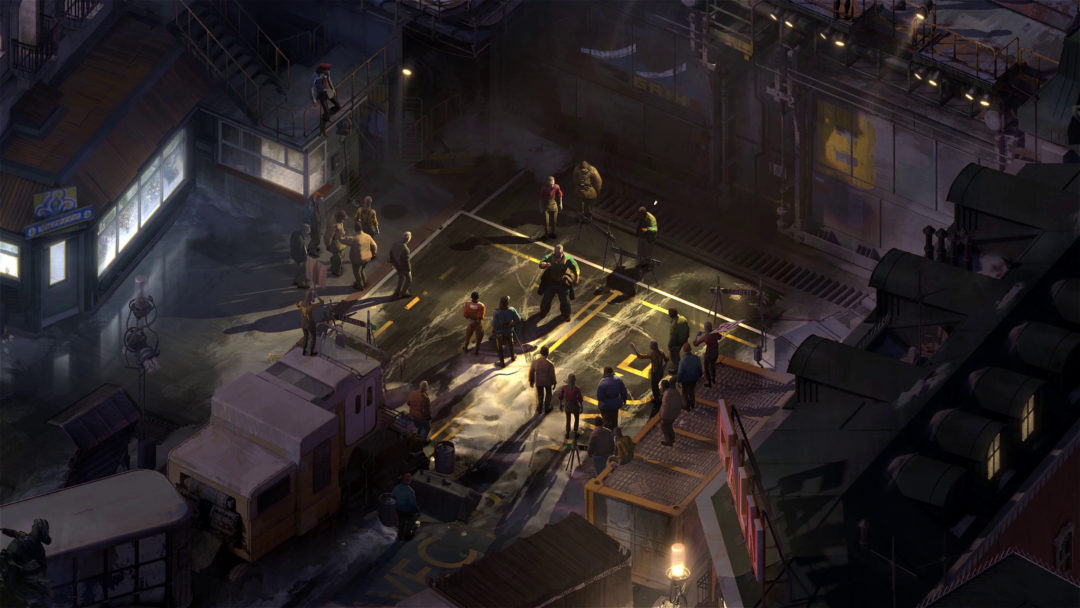 Throughout the game, you’ll be given the option to take actions that require a skill check. Each option indicates the skill at play and the degree of difficulty based on the player’s current attributes, equipped clothing, skill levels, and active consumables. Some checks can be retried, once you level up the corresponding skill, but others are one-time pass/fail scenarios.

Some of the funniest, most memorable moments from my adventure were caused by failed skill checks. In one instance, I tried to use my Authority skill to recommend a woman I was chatting with on a frozen coastline wear a hat to ward away the chill.

When she refused, my character lost his marbles and spent several hilarious paragraphs authoritatively and sarcastically screaming about getting violently intimate with chapeaus.

You’ll want to pay attention to what you say during conversations as well, since different responses can provide additional bonuses or penalties for an associated skill check. You don’t necessarily want to explore every conversational avenue presented. Think before you speak, even if you’re going to say something certifiably insane.

There’s no traditional grid-based combat in Disco Elysium, though there are certainly times where action and violence come into play. All of your major decisions and skill checks take place via the dialogue interface, which actually helps keep you immersed in pure role-playing. 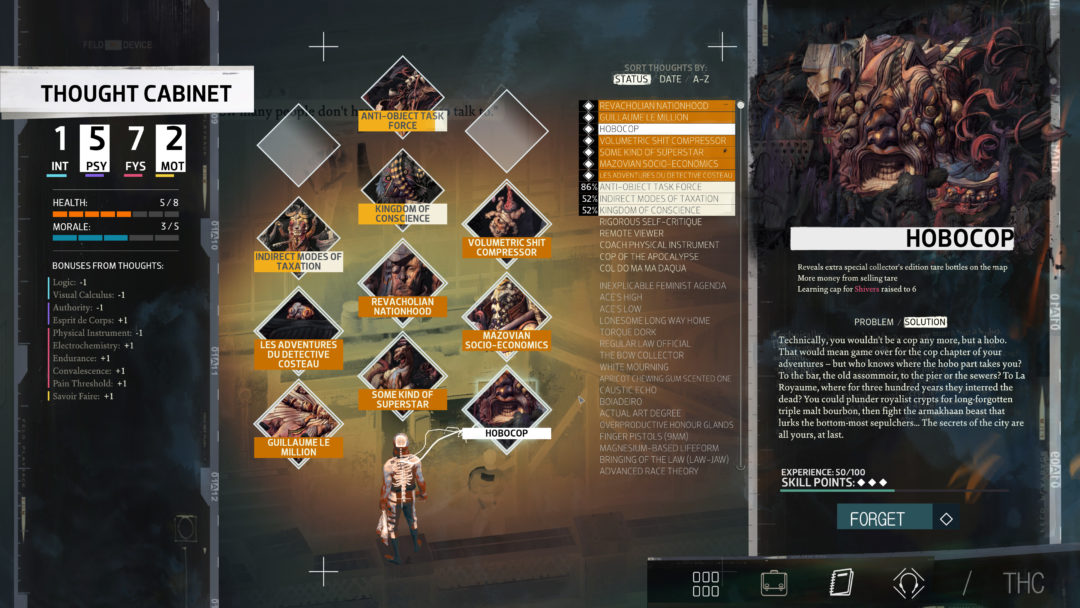 When you discover something particularly interesting during conversation or by finding an item, you can develop your Thought Cabinet. Each thought comes with a cryptic description like “Apricot Chewing Gum Scented One” and “Col Do Ma Ma Daqua,” and you never really know what a given thought will do before it’s internalized.

Mulling over a thought may yield temporary penalties to current skills, but completing it provides permanent stat increases. The thoughts can even add new conversational options based on your newfound beliefs. It’s an incredibly fascinating system for handling character perks that also yields unexpected narrative implications.

Your character’s alcohol-induced amnesia sets him up as a mostly blank canvas that you’ll spend dozens of hours painting. Defining and redefining who you are is one of the game’s most surprising and effective gameplay mechanisms since your character building, conversational choices, and innermost thoughts redefine the overall gameplay experience in significant ways.

The game’s setting is also undergoing a similar identity crisis. Revachol used to be the capital of the world, but it’s now under control of the interim government. Communists, facists, ultraliberals, and moralists all try to pull your character in different directions, and mediating the disparate interests of opposing factions like a corporation and the labor union will require that you take sides. Characters will remember what you say and do, and it’s likely you’ll eventually find yourself justifiably pigeonholed. 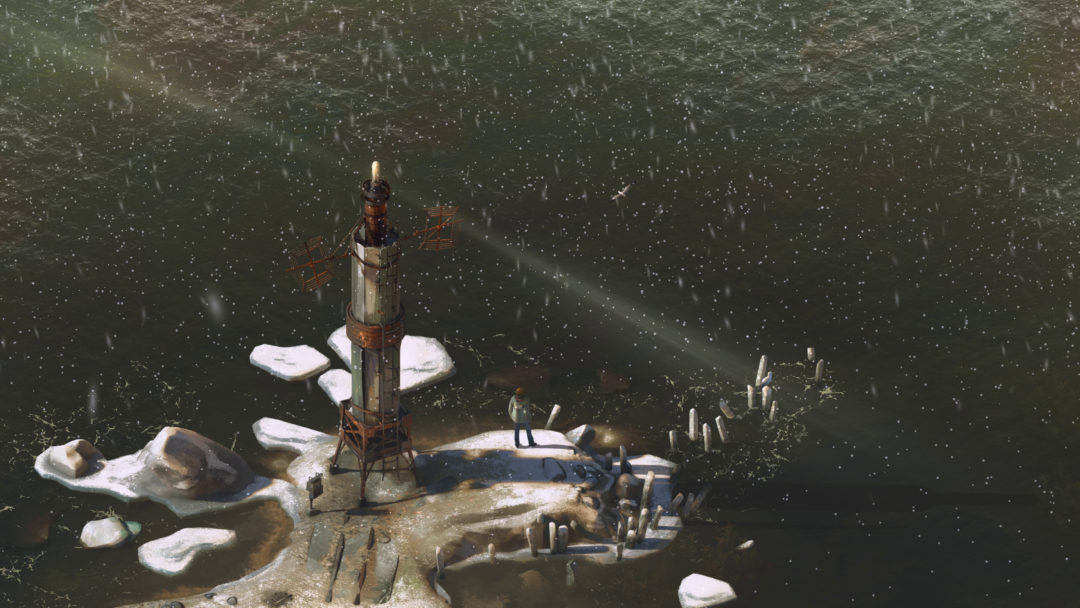 Similarly, the decisions you make with your build will likely drive your actions. I decided to play as the Sensitive archetype, which meant I began the game with higher base stats for Psyche and Physique. I was great with people, but prone to madness. Shortly after leaving my hotel room for the first time, I inspected an ashtray, which triggered a conversation with my Electrochemistry skill, the attribute that defines your cop’s relationship with drugs and alcohol.

The ability strongly suggested I go on a quest to find and smoke some delicious cigarettes of my own, and I agreed. Over the next dozen hours, I pumped more points into that skill and my detective has drifted into Hunter S. Thompson territory. He could tell when other characters were on drugs and was often on them himself, gaining better temporary stat bonuses from cigarettes, alcohol, and illicit narcotics.

Disco Elysium is a truly massive game that continues to enthrall me every time that I play. I’m creeping up on 40 hours of playtime to date, which includes fiddling around with some alternate character builds, and it feels like I might only be halfway there. Given the narrative variation, the developer’s claim that three full playthroughs would be necessary to see everything doesn’t feel like an overstatement.

Disco Elysium is one of the most interesting, narratively rich experiences with both role-playing and interactive storytelling I’ve ever had on a PC. It’s also one of the rare CRPGs I would recommend without hesitation to folks who traditionally tend to gravitate toward adventure games. There’s nothing out there quite like it, and I can’t see myself putting it down before my narcotic-laced, communist, disco supercop reaches whatever conclusion awaits him.