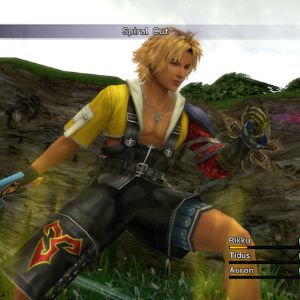 My opinion on Final Fantasy X has only ever improved with time. Although I quite enjoyed Tidus’ depressingly upbeat adventure when I played it back in the day, I nonetheless viewed it as the beginning of a downward spiral for the Final Fantasy series, full of ideas that made for a notably inferior installment. Every time I look back on it, though, I only recall the amount of fun I had, not so much the disturbance I suffered at all the scary, non-Final Fantasy changes. Really, the lack of a manually traversable world map wasn’t that bad.

Replaying Final Fantasy X on the PlayStation Vita, my belief that it was a delightful game in spite of itself holds true. FFX has aged phenomenally well, remaining an expertly structured roleplaying game with an engrossing leveling system and a subtle-yet-gratifying take on turn-based combat.

In a post Final Fantasy XIII world, one can truly appreciate how good X was, and how it bridged the gap between traditional Japanese RPG and modern fast-paced expectations in ways today’s Square Enix could only dream of.

Just the ability to input and carry out commands while the animation of the previous command is still finishing provides a fantastic example of what I mean – sure, that’s a minor aesthetic change, but it makes the turn-based battle feel far more alive, adding a sense of speed and fluidity to an otherwise methodical system. The ability to see the next few turns of combat – and alter that order of play using actions and spells – lends a tactical depth to proceedings, while the Overdrive special abilities, with their quick-time event leanings, add just a dash of extra interactivity to keep players on their toes. 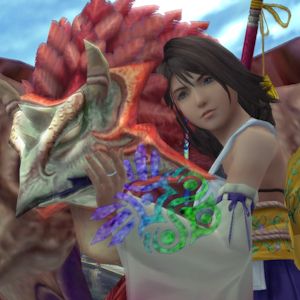 From contextual dialogue actions during boss fights, to full-on control of summoned aeons, Final Fantasy X brought a lot more to the table than it got credit for during its initial release. Just speaking of bosses, some of the series’ best encounters are found here, offering up some lengthy, emotionally draining slogs that nevertheless remain nailbiting affairs throughout. The ability to swap out party members mid-scrap, and the resulting need to utilize every single character, is yet another good idea that future RPGs seemed strangely uninterested in. Frankly, it makes far more sense than the usual convoluted need to have only three people of seven take part in all the action.

Of course, the Sphere Grid leveling system is what usually garners the most praise from fans, and there’s a good reason for that. Bizarrely unused in future Final Fantasy games, or indeed any other RPG, the Sphere Grid eschews traditional character levels for a complex map of statistical upgrades and abilities. Characters earn AP to move around this map, and unlock nodes using different Spheres found in battle, boosting their evasion, accuracy, strength, magic, and other vital stats. Each character starts in their own sector of the map, but as the game progresses, they will eventually be able to unlock routes to other areas, and eventually share nodes with other party members.

It’s a lovely little system, one that favors gradual, subtle progression over sudden and stark boosts in skill. Even though there’s not much choice in where you travel on the grid, there’s still an immense personal gratification in feeling like one is controlling every little improvement on each character. 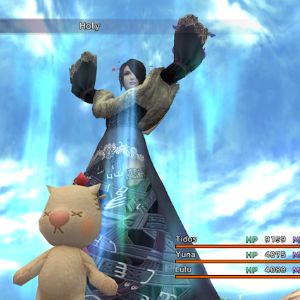 If you’d have told me back in 2001 that I’d one day play Final Fantasy X on a handheld system, and it’d look better than the PlayStation 2 version, I’d have slapped you in the face and damned you as a liar. Such is the sorcery of the world we live in that, thirteen years later, your cruel lies have become glorious reality. And indeed, Final Fantasy X does look better than it ever did, though the HD improvements carry with them some caveats.

Firstly, the game truly does please one’s eyes on the PS Vita’s OLED screen. It takes a while for the game to drop its darker, washed out aesthetic, but as soon as Tidus reaches Besaid and we start enjoying a brightly colored world, the high definition sparkle really starts to pop. FMVs look pretty damn stunning, while character portraits and menus benefit from the increased resolution. The Sphere Grid is perhaps a little darker than it needs to be, but otherwise, everything looks gorgeous.

That said, while the game looks great and main characters benefit from wonderfully overhauled 3D models, the HD upgrade highlights how many visual corners were cut elsewhere. It is incredibly jarring to see a main party member having a conversation with an NPC, as the difference in detail and animation is like night and day. It’s almost like Yuna and her guardians exist in a different game, having chats with supporting characters that possess only the bare minimum of detail in their faces, and it only serves to take one out of the game’s world somewhat.

The audio is also noticeably compressed on the Vita version of the game, which is a shame because the soundtrack is incredible and has subsequently been paid a disservice. While nothing sounds terrible, it’s hard not to consider how much better things should sound. Oh, and while this is not an issue exclusive to the HD Remaster, the voice acting still treads the line between acceptable and cringeworthy. That audio compression does little to make Tidus’ obnoxious “HA HA HA HA HA HA HA” scene more bearable.

Flaws with the remaster are noteworthy, but ultimately not too damaging. I chose the PS Vita version because I wanted to get back into a game that became my obsession more than ten years ago, and I wanted to do it in a portable environment. The PlayStation Vita gives me exactly that, and the fact it looks even better – for the most part – is a nice little bonus indeed.

Bottom Line: While its HD upgrades highlight some cut graphical corners a little too clearly, Final Fantasy X/X-2 Remaster is still a handsome visual upgrade to a classic game that has only felt more remarkable and enjoyable with age.

Recommendation: If you want better audio, you might want to nab the PlayStation 3 version. Either way, this HD overhaul is a great excuse to take a trip back to Spira.

True Detective: The King in Yellow