Greg Gillespie wasn’t really planning on doing much of anything but running a game of old school Dungeons & Dragons, but he ended up with a few published books anyways. “I began Barrowmaze as my home game” he said, “It didn’t have a name.” All Gillespie had, really, was “a specific vision of a field of mist-covered barrow mounds and a megadungeon beneath.”

He started designing with the enthusiasm you can only associate with hobby movements – because, you see, Gillespie is a diehard in the Old School Renaissance, or OSR, which has been focused on reviving old editions of D&D for about a decade now. They did it, at first, whatever way they could: Either getting their hands on battered old copies or digging them out of closets. Later, they played retro-clones of the game like Labyrinth Lord or Swords & Wizardry.

Gillespie released the first part of Barrowmaze – the dungeon – as its own ebook. This is all, of course, a hobby effort for him –a longside but not directly related to his own work as a college professor.

He got a lot of positive responses from fans, and a request that he continue the dungeon – finish it – from more than a few other members of the OSR. He wanted to go bigger, he wanted to bring back old artists who had worked on Dungeons & Dragons products back in the ’80s and ’90s, so he ran a successful crowdfunding campaign for Barrowmaze II.

Now, in 2014, he’s going for a victory lap. He wants to combine his two books into one, and bring his megadungeon together into a single volume. Sharing your dungeon with others is one of the oldest practices in the hobby of fantasy RPGs, and Gillespie is fulfilling the ultimate dream: Having what you made in the confines of your own home be beloved enough that others want to own it. It’s a dream that, sadly, not evenD&D creator Gary Gygax got to accomplish in his lifetime. Gillespie was far more modest than that about his accomplishment: “Barrowmaze has become part of the shared subcultural experience of the OSR and those who enjoy playing older editions. You can’t ask for much more than that.”

In some ways, it’s what Gillespie has done differently from others before that made him successful.”I had read about the importance of the megadungeon in the early history of the tabletop RPG hobby and I wanted to create something similar,” said Gillespie, “but with my own personal twist. So instead of dungeon levels stacked vertically on top of each other, I wanted a sprawling horizontal dungeon.”

In some ways, it’s the consideration of his design and the design that came before it that made him successful. In some ways, it’s because he’s perfectly serving a niche that feels underserved. Gillespie, and designers like him, are selling the gaming equivalent of pre-1985 Coca-Cola. 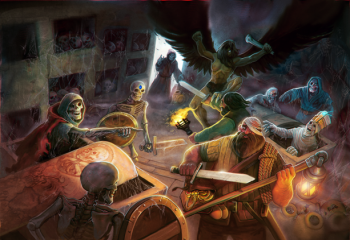 The OSR is a weird beast, then. It somehow combines a contemporary crowdsourced effort with a folk-gaming tradition. It’s a synthesis that has happened because of crowdfunding efforts and conventions – distributed across the world, but in constant communication. “I don’t think Barrowmaze would have happened without the Old School Renaissance,” Gillespie said. “I enjoy reading session reports of groups playing Barrowmaze. I get a kick out of seeing how some respond to the various encounters and traps and then comparing it to how my group negotiated the same things.”

“The blogs and the forums were instrumental,” Gillespie said. They helped him distill old school fantasy to its fundamental elements. When he went to create Barrowmaze the philosophical groundwork had been done for him.

“Many people think that old school play is all about Game Master (GM) and GM fiat,” he said. “It really isn’t about that at all. Old school play is about creating the parameters of a sandbox and then allowing the players to chart their own course through it. In this way the GM allows the play to create the story, rather than having [the GM’s] personal story precede play and then ramming the players through it.”

So he started with the basics and shot for the moon. His mist-shrouded tombs, his endless labyrinth, and the most basic guidance for his participants on what to do. In his own words: “Players in my game play the role of tomb-robbers and treasure seekers looking to make a quick gold piece on the cheap rather than working for a living.” He had four or five consistent players, but ran with a play style that facilitated frequent and cheap deaths for the protagonists alongside new players. “If a player missed a week,” he said, “we assumed their character went on a bender instead of an expedition to the dungeon.”

In the end, Gillespie had Barrowmaze, a work made by himself, but defined by the culture he made it in. The growing community and the sheer joy of his favorite hobby was what kept Gillespie working on the project – not a drive for word count, module size, or any business instinct. “You cannot replace the creativity and charm of the home-game,” he said, a statement that could easily be the motto of Barrowmaze and of the OSR itself.

When it comes to his opinion on the kinds of adventures that don’t grow out of home play, those produced for-hire by various companies for their games, he didn’t dismiss them outright, but he left a wonderful image: “Many ‘official’ products are over-produced, lack creativity, and are devoid of player choice. The illustrations are bland and overly-heroic and leave little space, ironically, for the imagination. In that context, the games played at our dining room tables take on greater import, not less. By investing in our games, we invest in the broader hobby. Our games, therefore, pay homage to the past while charting new direction for the future.”

You can find the campaign to fund Barrowmaze Complete on IndieGoGo.

8 Reasons You Should Call In Today And Stream Movies