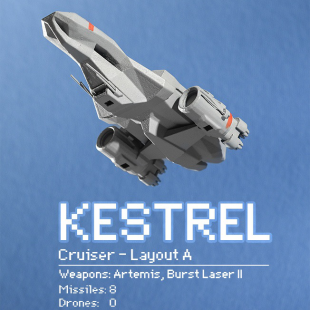 Imgur-user TheLobsterClaw has posted a gallery of a custom 3D-printed model of FTL‘s iconic Kestrel ship.

While FTL: Faster Than Light featured a whole roster of diverse ships for players to unlock and experiment with, the most iconic of the whole bunch is probably the game’s starting ship the Kestrel. Plain, humdrum and sorely ill-equipped for the journey ahead; it’s simple design has become an arguable emblem for the game as a whole.

It’s no surprise then that some have been exploring ways to bring the ship into the real world. Back in 2013, for instance, a LEGO CUUSOO campaign took a shot at fashioning an entire line of LEGO FTL ships. More recently however, an enterprising Imgur user turned to the seemingly endless wonders of 3D printing to create his own tangible Kestrel.

TheLobsterClaw (probably not their real name), recently posted a gallery of a custom 3D Kestrel they modeled with 3D animation software Maya. The model itself was then printed at Shapeways where it’s actually still available for any FTL fans who might like one of their own.

As the game only displays the Kestrel from certain angles, LobsterClaw admits that he and his teammates had to take some liberties in “experimenting with different looks” for its underside. Their final result was designed to avoid looking “sleek” whole still “maintaining a formidable silhouette.”

Just personally, I’d say LobsterClaw and company were very successful with their take on the craft. I’m a big fan of FTL and my immediate response to their print was the “gimme gimme” that I tend to reserve for things my inner-child finds to truly awesome. What do you think? Is your reaction the same or is there another ship you’d rather have lining your toy shelf?

Microsoft is Bringing a Remote Desktop App to Windows Phone 8.1