A lot of people seem to have varying concepts of what the Metal Gear series is intending to be. The word “quirky” tends to get thrown around a lot. But quirky I would understand. Wario Ware and No More Heroes are “quirky” games that I like a lot. It’s quirky bits alongside attempts at serious character drama where the writing gets just plain bad. Like Metal Gear Solid 4, in which a soul-sick dying old man puts a gun in his mouth in hour 1 and rolls around in a barrel until he pukes in hour 2.

But I’m not going to beat on Metal Gear too much, because there’s still something about it that appeals to me. That’s why I don’t want to hear anyone reminding me that Hideo Kojima was only on Rising in a supervisory role, because in my desire for artistry in games I cling to the notion that at least one major franchise is directed by a single auteur. No, I’d like to talk about game plotting in general, and one game plot in particular.

Okay. Games industry? There’s a plot that I know you’re all very fond of, but you need to stop using it. Here it is, in brief, broad terms:

“A private military company (or arms manufacturer) deliberately engineers terrorism or political destabilisation in order to provoke a global conflict, because then there will be lots of business for them.”

Now, it’s very easy to see why this plot strikes a chord with modern audiences. It combines the PMC – one of the few remaining acceptable targets in a sociopolitical minefield because they are generally understood to consist of soldiers who want to fight for personal gain rather than out of loyalty to a country or ideology – with the bogeyman that is big business, and the pursuit of profit over human lives. This is a time of crisis after economic crisis, and it’s a fairly understandable rule of thumb that whether popular fiction depicts the powerful as gentle protectors or greedy hoarding assholes depends largely on whether or not there’s a recession going on. One of these days I should write a serious article about my “Dragon” Theory Of Global Economics.

But any character shown to have the motivation expressed above is immediately placed on the level of a Care Bears villain, who wants to cacklingly use an exotic contraption to drain the sunshine from every baby’s smile. To my mind, the truly great villain is one whose thinking we could sort of understand. We should be able to imagine how, from their perspective, they see themselves as the protagonist. That can’t always be the case and there’s nothing wrong with making the morality of the story a bit cut and dry, but at the very least the villain’s scheme should make sense on some logical level. In that regard, “PMCs provoking global conflict” is beaten out even by the baby smiles plot, which at least leads to a net profit if you can find a good sunlight fence. Here’s why:

1. A PMC requires more than just a state of war to function

The problem with making a massive global conflict happen is that at some point it’s going to come back and hurt you. Because that’s war. In Metal Gear Solid Peace Walker, in a classic example of writing worthy of a 12-year-old, one of the villains is trying to get a nuke detonated for some unclear purpose related to nuclear deterrence, and it’s pointed out to him that the radiation will destroy farmland. 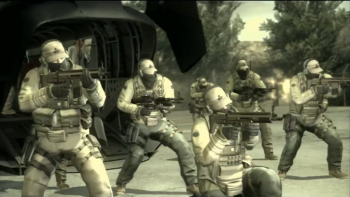 His response is that all those farmers can be hired to build armaments instead. That’s a great idea, except that the farmers, and also you, have to eat at some point. Your company still needs manpower, electricity and facilities, any one of which could be lost from a single inconvenient bomb. And then, even if you do make lots of money from security contracts, it doesn’t take much enemy action for that money to lose value. What if they blockade trade, or nuke the stock market?

But okay, let’s say they’re only encouraging a war between countries far away from where their head office is based. You still run into the problem that:

2. Any secret evil scheme a PMC concocts is inherently insecure

I’m just going to assume that you probably don’t want it getting out that your company funds terrorists or deliberately and calculatedly fuels war. And a corporation, by nature of being big and faceless, consists of a large number of individuals, any one of which could grow a conscience at any time. What are you hoping will prevent that? Company loyalty? I already said that the whole reason PMCs are a popular villain is because their employees aren’t loyal to any kind of ideology, only to money. And they might think that there’s more money in blackmail, or turning you in, than putting their lives on the line for a yearly salary. You have no right to look surprised if you exclusively hire amoral traitors and then they betray you.

But even if you did manage to secure the perfect combination of ruthlessness and loyalty in your workforce, you can’t escape the fact that:

3. Creating a niche for your business doesn’t necessarily mean you’ll fill it

The equivalent to the “Engineer war so that people will hire your PMC” scheme would be if someone at, say, Cadbury’s, tried to improve sales by dumping hunger-inducing drugs into the water supply. You make everyone hungry, but they’re not necessarily going to buy your product, are they. This notion often seems to slip by the evil PMC. The warring armies could just as easily buy security from one of their competitors, who might then drive them out of business. That seems like something of a risk, on top of the financial risk from the no doubt stupid amounts of cash being blown on the scheme, and also the risk of being found out, going to prison, and getting nobbed in the showers.

When bad things happen, looking for something to blame is a very human response. None of us like to think that we live in a world where any one of us could be crushed by uncontrolled chaotic forces at any time. So if we can’t find a clear culprit, we look for whoever benefits, and then it’s a small step to depict them as actually having calculated it. But I think we as a species would be a lot mentally healthier if we stopped taking comfort in delusions and learned to accept the transitive nature of our existence. That’s why I spend my Sunday evenings in an airtight box with a poison gas capsule set up to release on the decay of a single radioactive atom.