Marvel Comics’ point-men in Hollywood spent the mid-to-late 1970s trying and failing to replicate the unexpected mega-success of the live-action Incredible Hulk TV series, constantly looking for ways that their various other characters could be retrofitted into weekly prime-time success. What they kept missing was, in retrospect, simple: The Hulk “fit” on a grownup-targeted nighttime series because he wasn’t a superhero — a character type that, at the time, hadn’t precisely figured out how to “work” simultaneously as characters for children/teens and adults in terms of mainstream viewership.

Whereas other Marvel heroes wore colorful spandex or wielded magical/scifi weaponry, The Hulk was an atom-age updating of classic Wolfman and Jekyll/Hyde horror tropes. More importantly, his big visual gimmick could be achieved in live-action by applying green makeup to a former Mr. Universe. The number of Marvel characters who also weren’t (technically) superheroes and were interesting/noteworthy enough to possibly warrant a series was actually fairly small, but one name obviously stood out even then:

Doctor Strange! “Superhero?” Ha! No, no. He’s a wizard — everyone’s heard of wizards!

The “other” great co-creation of Stan Lee and Steve Ditko, Doctor Strange was conceived as an attempt to revive the pre-WWII pulp/radio-serial tradition of heroic magic-users like Chandu the Magician for a modern audience and spun off into something much more… well, strange — drawing visual and thematic inspiration from sources like 50s neo-occultism, psychedelic and “Beat” artwork and New Age spiritualism.

It’s a big idea with a great hook: Stephen Strange, a brilliantly-skilled but arrogant and fast-living surgeon, loses his precise hand dexterity (and thus his livelihood) in an accident. Seeking a magical cure from a Himalayan mystic called “The Ancient One,” he instead finds himself drafted to become the new Sorcerer Supreme, a master of the magical arts charged to defend Earth from supernatural threats. In theory, this is all stuff that translates exceptionally well to a non-comic setting freed of even tangential superhero baggage. A wizard keeping modern NYC demon/ghost/etc-free? Yeah, that’s a show.

But it’s an expensive show. Instead of a signature weapon or costumed rogues gallery, Strange’s visual appeal in comics was rooted in the fantastical creatures, bizarre concepts (for example: the personification of the abstract concept of infinite space) and surrealistic otherworldly dimensions he could visit. Trying enough for a comics artist — impossible for a network TV series. Thusly, the 1978 CBS TV movie adaptation Dr. Strange would end up trimming such things to a bare minimum of screentime, replacing them with…

…not much of anything, actually. 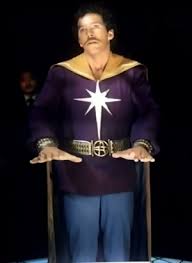 Seriously. Of all the Marvel TV projects I’ve watched (or will be re-watching) for this series, Dr. Strange is the most difficult to get through. It’s hard to believe, but its opening moments where evil sorceress Morgan la Fey (Jessica Walter — yes, Lucille Bluth and Mallory Archer) stands on a soundstage representing an alternate dimension that wouldn’t have passed muster on Lost in Space while conversing with a deep-voiced demon shrouded (badly) in red fog turn out to be the visual high water-mark of the piece.

The storyline proper bears almost no resemblance to the Strange of the comics, to the point where one could be forgiven for not realizing what it was supposed to be. In this version, Strange (played by character-actor Peter Hooten in a rare lead turn) is a psychiatrist and ladies-man in the proud 70s TV-doctor tradition — a rebel who clashes with hospital brass over his apparently controversial approach of trying to understand and talk it through with the mentally-ill rather than medicating and dumping them into the asylums, and he gets back at said brass by… sleeping with everyone woman who shows him even mild interest and constantly being late for work.

As it happens, Strange’s inherited signet ring marks him as the successor to Thomas Lindmer, the current Sorcerer Supreme (John Mills), whose advancing age is interfering with his mission to protect Earth from la Fey and… whoever that is she’s working for. Morgan possesses a young woman named Clea (Strange’s early love-interest from the comics) to try and kill Lindmer, which not only fails but leaves her traumatized and in Strange’s care — giving Lindmer cause to show up and reveal himself, his powers and Strange’s destiny to the Doctor. 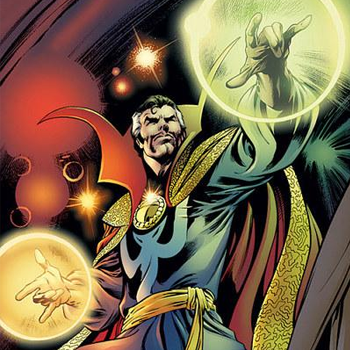 Since this is a protracted origin story, you’ll be unsurprised to learn that anything remotely eventful in the comic-book sense is confined to the third act. The bulk of the film is spent as we watch Strange have various conversations with Lindmer and Clea as he decides whether or not he wants to accept his role as Sorcerer Supreme or even buys into the idea at all in a “man of science versus the supernatural” sense. It should also go without saying that references to the Marvel Cosmology are all but entirely absent: There’s no Dormamu, Cytorak, Watoomb, etc; all swapped out for generic religious/mystical, mythic references that’d draw bored eyerolls amid the laziest D&D campaign.

The dull cheapness of the whole affair can’t be overstated. About 80% of the “magic” we get to see are riffs on the Jedi Mind-Trick (with, admittedly, an initially fun conceit of Lindmer explaining what actual functions of the mind/body he’s manipulating to influence someone) or optical effects involving glowing hands and eyes. When Strange journeys to The Astral Plane to wrest Clea’s mind free from Morgan, it resembles the cheap “surreal” montages used to depict drug abuse in old public service films. Morgan summons two minions over the course of the story, which are depicted as a guy in armor on a horse briefly edited in during the aforementioned montage and a rubber-suit monster that appears in silhouette only. A “final battle” between her and Strange to rescue an incapacitated Lindmer involves the two actors standing in that “otherworldly” soundstage shooting colored beam-effects at each other.

The only actual amusement to be gleaned, near as I could tell, was how the sheer 70s-ness of the production (colorfully-blighted NYC location shooting, insistently-throbbing instrumental-disco soundtrack) conspires with certain plot elements and the tacky low-budget overall aesthetic combine to make it feel like “vintage” pornography is about to break out at any moment. Hooten’s Strange look — tall, lanky, gifted with bushy mustache and white-guy afro ‘perm — when combined with how unconvincing he looks in his doctor coat, is unavoidably the exact look you think of for 70s Porno Guy (“May I take your… ‘Temperature?'”)… and it doesn’t help that a huge part of the plot involves him being somehow irresistible to women.

Specifically, on that last point: Why doesn’t Morgan just murder him now while whatever magic he has can’t possibly match hers? She’s overcome by his handsome charms, and would rather battle the more powerful Lindmer so that she can potentially claim the Doctor as consort if she prevails. Yup. Granted, it’s “cute” to see the tired “I can’t kill my arch-nemesis — she’s just SO HOT!!!!” routine get gender-flipped… but it’s still incredibly stupid.

It’s all just so much dreary nothingness to slog through, only to see Strange do “Doctor Strange stuff” for a few moments at the very end and only wear his proper Doctor Strange costume in one scene — even when he battles Morgan, he does so while wearing a Victorian opera coat that seems to function as his “other dimension attire.” The ONE interesting idea that the production has, Morgan reinventing herself as an L. Ron Hubbard-style New Age spiritual guru/cult-leader with a special interest in “open minded young people,” appears only at the very end as setup for the status-quo of the TV series that was never to be. Not only is Dr. Strange awful, it was awfully-promoted — the network actually debuted it against Roots!

Marvel Studios has announced a new Doctor Strange movie as part of their new Marvel Cinematic Universe endeavor, with details (likely including the chosen actor) expected to be revealed in a few days at SDCC. But it won’t be the first time someone tried to give the good Doctor another try onscreen: In the early 90s, B-movie powerhouse Full Moon had acquired the character’s movie rights and planned a new film, but weren’t able to start production before their license expired. Their decision, change the names, proper-nouns and copyrighted materials from the script and just make the movie anyway as Doctor Mordrid, with the great Jeffrey Combs as the titular hero.

The 1978 film, meanwhile? It has yet to see a DVD or Blu-ray release — in this case, we probably lucked out.

PSA: The Escapist Is Going To Comic-Con

8 of the Best Cards In Hearthstone: Curse of Naxxramas