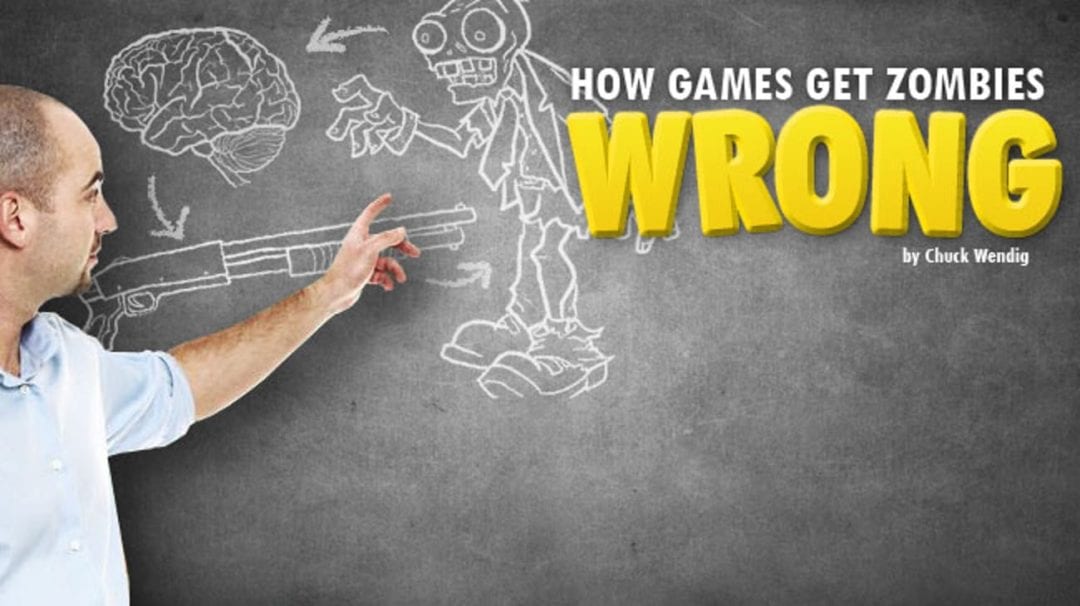 I regret to inform you that you have failed your Zombie Aptitude Test, or the ZAT. You got a score of 10 out of 1600. You received those ten points because you spelled your name correctly and because you drew a little doodle of a chibi zombie at the top corner of the exam.

The true threat in a zombie apocalypse is other humans.

That answer doesn’t even make sense. It wasn’t even a choice half the time. You just wrote it in on the Scantron form. In pen, no less. Your teachers are very disappointed.

That said, you are likely aware that everyone is allowed one free retake of the ZAT to determine whether you’re going to be allowed into Undead University. As such, we are casually and quietly suggesting – oh, just ignore the pesky pistol lodged in the small of your back and the car battery on that nightstand over there – that you undergo a tutoring session with us, ZAT Prep Course Inc., before reattempting the ZAT and making more zombie-related videogames which, as noted, get zombies totally fucking wrong.

We begin by addressing the question, What makes zombies scary?

What’s that? You think that zombies are scary because they’re gory undead half-rotting cannibals? And I’m sorry, did you again mumble something about “shoot zombies with guns?”

Bzzt. As the electric shock that just coursed through your body suggests: Wrong.

Zombies are about subversion.

Zombies are like a form of really aggressive cancer: Just as cancer subverts healthy cells and corrupts their normal function, so, too, do zombies subvert healthy humans. It might be with a bite or a scratch, or maybe it’s by dint of death itself, so that when one’s demise comes it never truly comes. This is the subversion of sickness, of disease. Zombies are scary in the way that Ebola or HIV are scary. Zombies are the black plague of monsters – get too close, drop your guard, and they will do more than just kill you. They will infect you.

As you may note, this rarely, if ever, shows up in your zombie-themed videogames. For the most part, zombies in games are scary only as a constant physical threat. They stomp, shuffle or run at you. Then you shoot them. Or blow them up. Or decapitate them with Garden Weasels.

But rarely are we confronted with the fear of becoming them.

And this subversion is what makes the zombie unique. If all they are is a horde of rampaging lunatics that must be dispatched with shotguns and pipe bombs, then are they really any different than a Christmas Eve shopper riot at Toys R’ Us?

Second question. What is the true threat in a zombie apocalypse? On this napkin here, you’ve written in your own urine, “ZOMBIES R SCARRY CUZ THEY EAT YOUR HED – SHOOT THEM W/GUNZ.”

Wow. That electric shock already did a number on your frontal lobe. My bad. Still, wrong is wrong, so – bzzt! – it’s time for another shock.

Controversial assertion: Zombies are not monsters. Or, rather, they are not by themselves meaningful monsters. Sure, that zombie wears a gore-slick nurse’s outfit, and the other zombie over there looks like a construction worker cradling his own fly-speckled guts. But they’re ultimately hollowed-out and personality-free. As monsters, they’re just not compelling characters. A vampire is a creature of personality. He has motivation: blood, sex, to be a dick, to sparkle, whatever. The same holds true for the other monstrous threats: Frankenstein’s Monster wants life. The Creature from the Black Lagoon just wants a little hot-n-tasty swamp love. Aliens want to anally probe us. Werewolves want … well, I have no idea. Human-flavored Milk Bones? Never mind that, we’re not talking about werewolves.

Zombies are like a form of really aggressive cancer

Stop thinking of zombies like monsters and start thinking of them like a corrupted force of nature. The zombie menace is like an earthquake, a flood, a plague of locusts. It is an unthinking, unintelligent violation of nature. The zombie apocalypse cannot be stopped with a pair of Desert Eagles in the same way that you cannot use a fire ax to stop a tsunami or a Molotov cocktail to countermand a nuclear winter. Zombies are the supernatural equivalent of Hurricane Katrina – sure, the hurricane was awful all around, but the wretched result that ensued was born of more than just the hurricane. The rain and winds were just the first domino to fall.

And that means that zombies aren’t the true threat in a zombie apocalypse.

When zombies walk the earth, humanity’s most basic needs are threatened. It’s harder suddenly to find and procure food, shelter, ammo, allies. Soon as the pyramid that is Maslow’s Hierarchy of Needs starts to crumble at its foundation, the bare necessities of survival are thrown into contention. Without warning, a single candy bar becomes the nougaty line between life and death.

What then emerges is the true threat in a zombie apocalypse: other humans.

This is true in all the best zombie fiction. 28 Days Later offers terror in the form of Major Henry West, played by Christopher Eccleston. The re-make of Dawn of the Dead throws together a group of unhinged survivors, one of whom loses his mind and shoots another survivor when his own pregnant girlfriend re-animates. In Jonathan Maberry’s novel, Patient Zero, terrorists are the engine behind the release of the zombie strain. In the comic and television show The Walking Dead, we see again and again how humans are the true monster: the jealousy of Shane, the distrust of Dexter, the madness of the Governor.

But do we see this in games? Not so much. Mostly, it’s wave after wave of stumbling dead. Where’s the human sniper who wants to kill me for my Tastykakes? Where’s the guy who tries to seduce my girlfriend? Where’s the drunken survivor who accidentally leaves the back door unlocked and lets the zombie menace into the farmhouse where we’ve been holed up for the last three weeks? Where’s the out-of-control military commander who won’t let me and my family through to the “safe zone?”

What’s the real threat in a zombie apocalypse?

Final question in our tutoring session: How do you survive the zombie apocalypse?

Your answer, which I’ll play back on this hand-held digital recorder:

Ooooh. Too bad. That car battery is really doing a number on your thinkmachine, huh? And yet, fair is fair. How are you going to learn anything if I don’t negatively reinforce these terrible answers with a high-voltage shock jacked through the alligator clamps attached to your private parts?

Bzzt. There we go. Can someone clean up the student’s drool, please? Excellent, thank you.

The correct answer is: you don’t survive a zombie attack. Sure, you can dispatch a handful of the undead with a shotgun. You can take a shedload out with a hand grenade.

But you can never kill them all. Because they’re already dead. Because the entire population (give or take a margin of 1%) has fallen prey to the zombie plague. Because even dropping a nuclear bomb only takes out those in the radius of the actual blast; do you think zombies give a rat’s ass about radiation poisoning? They’re like cockroaches.

You cannot win against the zombie menace. In the end, the horde always triumphs. This is true of most zombie-related fiction. In fact, the zombie sub-genre is probably one of the most nihilistic on record; most zombie books, comics, films, and shows end up with most or all survivors turned into zombie chow.

You might be saying, “Yes, but that would make for a terrible game, a game in which nobody can ever win.” (At least, you might be saying that if we didn’t just shock you into a state of permanent aphasia.)

We’d say you have a good point except for one word:

That’s right. Pinball. Pinball is a game you can never win. Like life, it has no end beyond the one where you finally lose your last ball and the game tells you how many points you’ve acquired. Pinball is the ultimate game representation of the zombie survival horror genre. It’s about seeing how far you can get before the grim inevitability is realized.

Let’s end on this: You’re getting zombies wrong. You’re getting them wrong because you’re treating them like any other enemy – they might as well be reskinned to look like aliens, Deathclaws, Combine soldiers, or bloodthirsty Energizer bunnies. Zombies are so much more than a physical threat. They’re life, subverted. They’re the supernatural force that strips us down to our worst, most desperate instincts, and throws us against one another in an arena of fear and survival. All the things that terrify us about cancer and AIDS, about hurricanes and earthquakes, about life and death, those things are encapsulated in the horror of zombies. Horror isn’t about loops of guts and viscera. It isn’t about the moaning dead. That’s just the mask it wears. The true face of horror is a commentary on our own hideous nature.

The correct answer is: you don’t survive a zombie attack.

And so, game industry, yes, your zombie games are fun. But if you want to really get into what’s awesome – and awful – about zombies, you’ll need to move beyond a living dead version of Duck Hunt.

Chuck Wendig
Chuck Wendig is equal parts novelist, screenwriter, and game designer. He currently lives in the wilds of Pennsyltucky with a wonderful wife and two very stupid dogs. He is represented by Stacia Decker of the Donald Maass Literary Agency. You can find him dispensing dubious writing advice at his blog, terribleminds.com.