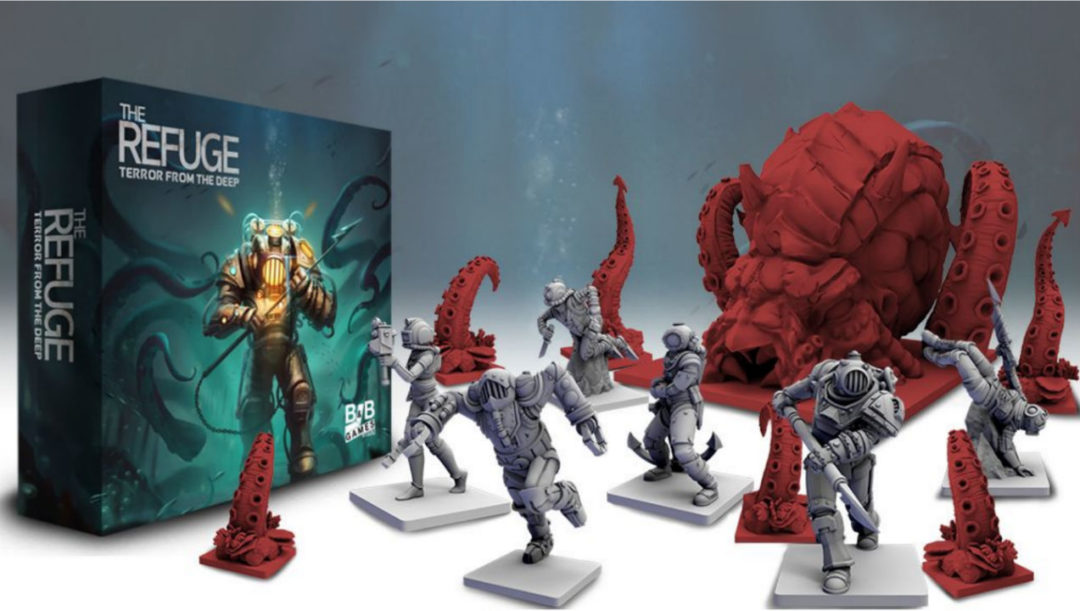 It’s August 2018 and we’re at GenCon. “What about a solo mode?” asks Floyd Lu, creative director of B&B Games Studios. We’re in the midst of a long conversation about what to do for the next edition of his game The Refuge: A Race for Survival. It’s been selling well for two years, but we’re convinced we could take it to the next level with the right changes in a new version.

Developing expansions, new editions, and sequels to existing products is a particularly tough challenge. You need to hold true to the spirit of the original — but deliver something entirely new that’s going to ignite your audience. I often refer to it as a game’s “promise” — the experience you tell people they are signing up for. For The Refuge, our promise is simple: the thematic immersion of a big miniatures game but in a quicker, easier to teach package.

Making sure we delivered on that promise was the hard part.

Concept art from Refuge: Terror from the Deep

Floyd and I began with concepting and worldbuilding — fleshing out the storyline for Terror from the Deep. After we had settled on an alternate history featuring steampunk divers, we spent a few weeks poring over photographs of vintage diving suits and submarines to collage inspiration for the concept art. While doing research, we found an old sea tale about the UB-85, a German submarine from WWI that was sunk off the coast of Scotland.

One of the things I think that is key to writing alternate history is having an anchor of truth to base your story around. For us, the UB-85 became that anchor: a mysterious wreck that we reimagined as having been sunk in its encounter with the Kraken. The game opens in 1934, as the world is on the brink of conflict — and the secret cargo of the wrecked UB-85 may hold the answers.

A Race to Escape

The Refuge: Terror from the Deep’s competitive gameplay is based on Race for Survival’s, in which 2 to 6 survivors race to the last safe place in the zombie apocalypse. Staying true to that gameplay while making a few key changes was an important priority. We didn’t want players who had played the original to have to learn too many new rules, but there were a few things that we wanted to emphasize: stronger characters to help showcase the theme, and the new Kraken at the end of the board that guarded the submarine.

Multibeam scan of the UB-85 wreck, via Scottish Power

Floyd worked on the core competitive gameplay, while I focused on cooperative. We worked in concert on the character abilities, which would need to cross over between both types of dives.

Each time major gameplay functionality was added to one mode or the other, we had to go back over every character with a critical eye to see if we’d broken something. Sophie’s ability to Bait

the Kraken to a specific location required four or five versions to make it work well in both competitive and cooperative dives.

The vision for Cooperative crystallized quickly: playable by 1 to 4 players, we wanted to have the board game equivalent of an action-filled monster movie. The Kraken would provide the tension and work actively against the players — so we needed an intuitive “AI” that would drive its actions.

The core of the Refuge’s AI is the Kraken Card — the top shows an action for the head of the Kraken, while the bottom section moves the three columns of tentacles directly in front of the Kraken’s head. Each player draws a Kraken card at the end of their turn, which helps scale the game’s difficulty as you add additional players.

Making the Kraken cards clean and as little work as possible was key — in a video game, the computer handles all of the work of moving the enemies. In a boardgame, it’s important that upkeep can’t be tedious or too much work for your players.

Solo and cooperative tabletop games have some peculiar challenges. Because the AI provides a significant source of tension for the players, you have to make sure it’s dialed in just right. Too easy and a game can be boring. Too hard and the game feels unwinnable and out of control.

Early playtests of Terror from the Deep had significant issues. A huge, open board meant it was hard for players to team up and feel like they were working together. Slow-moving tentacles rarely reached the end of the board — and that significantly reduced the pressure for players to take actions.

The design really turned a corner when a playtester suggested dramatically shortening the board — something we hadn’t done initially as competitive had benefited from a longer race. It clicked a bunch of avenues of interaction all together. A shorter board meant that it was easier to move around to address problems, work with teammates, and also meant everything the Kraken did was more threatening. We settled on a double-sided board — which adds very little cost to each copy.

Suddenly, the game felt tight and I could focus in on making each objective feel right without worrying about the rest of the game’s structure. First draft objectives focused entirely on the acquisition of Salvage, which didn’t leave much room for creative play and problem solving. As we iterated, I experimented with concepts that drastically changed the game’s structure, including adding dexterity elements, communication restrictions, speed play, and using the components in the box in novel ways. Not all of those radical experiments survived, but I’m proud of a few that made it into the final version of the game.

The first playtest of the newly shortened board.

Many cooperative board games rely on the threat of losing or making mistakes to fuel them. For example: surviving some amount of time, not playing cards out of sequence, not having too many outbreaks of disease, etc. One of my core goals during the development of The Refuge: Terror from the Deep was ensuring that the fundamental victory conditions were interesting. For that, I went back to the theme and world Floyd and I built. If the goal was to feel like an immersive monster movie, why not incorporate major story beats into the victory conditions of the game?

To win a cooperative dive in Terror from the Deep, you’ll need to accomplish three objectives, each highlighting an iconic moment in the story of your dive. When you accomplish an objective, you flip it over and receive a reward that’s narratively tied to what you’ve done. A game might find you observing the Kraken’s biology, uncovering a secret shipwreck, then getting devoured by the Kraken and cutting your way out from the inside!

Providing players interesting puzzles and varying challenges with each game session drives the story in a new direction every time. Since each of the six divers has a unique skillset, you can play the same set of objectives with a new character and have a different experience. We tried hard to represent some of our favorite moments in undersea action and monster movies — in many ways, leaning into the tropes of the genre helps give the game its cinematic feel.

Zeroing in on One Player

Throughout development, solo gameplay was constantly being tested and iterated. It was important to me that in Refuge, your solo experience had you controlling only a single character. Many cooperative board games require you to control multiple characters in order to play alone, breaking immersion. We wanted players to embody their character in the rich world we’d created, but controlling a whole group removes you from that mapping of your “avatar” into the game world.

This meant that cooperative dives really had to built from the ground up with solo in mind. I’m proud that the solo game for the Refuge only changes a single rule in the entire rulebook, with almost everything else done to scale the game for one player being neatly hidden in other parts of the game’s structure.

It’s been an incredible journey. The Refuge was on of the first projects I took on when I left my comfortable corporate design position to freelance in the board game industry full time. Collaborating with Floyd has given me a new appreciation for how much work it is to bring a board game to completion — but I think the care and attention put into the details of the game shows.

The Refuge: Terror from the Deep is first available through Kickstarter starting June 3rd, 2019. I hope you dive in with us.

’90s Throwback Yooka-Laylee Throws Even Further Back in Sequel

Jedi: Fallen Order Looks as Boring as a New Star Wars Game Needs to Be

Doki Doki Literature Club Plus! Side Stories Play You More Than the Original Ever Did