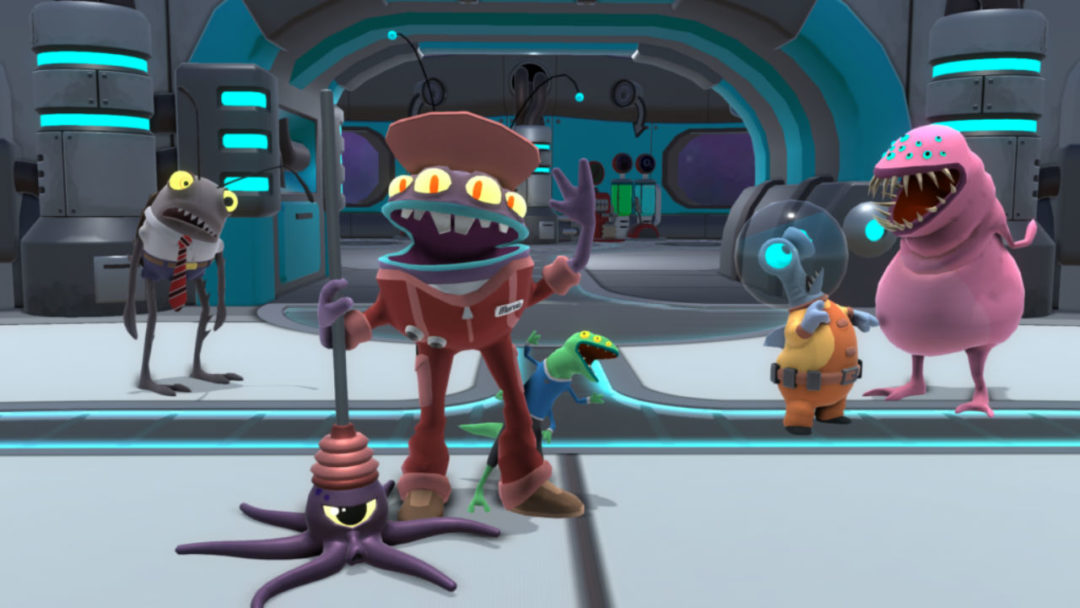 “How the hell do you make that work!?” That question, or some variation of it, is most people’s reaction when they find out my wife Erin and I work together. In fact, we spend about 99 percent of our time together. Our desks are within touching distance! For most people, the thought of losing any barrier between life and work, the constant connection with someone with no room to disengage from a disagreement, is often terrifying. But not for us. A combination of passion, friendship, and necessity has led us down this road, and we are making it work come hell or high water!

Before I dive into how we make this work, I have to talk a little about what we make. We are currently working on a 3D action simulation game called Cosmo’s Quickstop, which is about interstellar gas station management. It is basically a crossover between a time-management game, a minigame compilation, and a sci-fi action cartoon. First imagined at a game-jam about working in a call center in Hell, Cosmo’s has come a long way. Almost every change and decision about the game is centered around the concept of how we can best work together to actually get the game done.

We have a couple core principles at our company that guided us to where we are now. First, Erin and I have degrees in 3D animation, so any game we work on must be in 3D with a focus on character animation. Second, any game we work on has to be a game we would both want to play. People always say you should make games that people want to play, but making sure that everyone on your team is one of those people is the most important part for us. Erin and I have a large Venn diagram of games we play, but the overlap is much smaller than our total circles, so finding the perfect game to make took some time.

A lesson that took us a long time to learn was that you have to play to your strengths when making a game. Before we worked on Cosmo’s Quickstop, we had a failed 3D platformer. It was a gargantuan undertaking, wildly big, with a massive number of complex levels, physics programming, story writing, and game design. After spending about a year on it, we weren’t even close to finishing it. I was busy trying to write code that was way above my knowledge while Erin was trying to design levels and puzzles for the first time ever. Heck, we were still trying to settle on a jump height! This whole process was incredibly painful and slow, and to make matters worse, we were planning our wedding at the same time. We ended up canceling it less then a month after we got married, an interesting wedding gift from the universe. When you try and fail, it puts undue stress on a relationship, which can lead to a loss of trust, disappointment in yourself and others, and general anxiety.

Which is why we decided our next game would be made out of parts that we were good at making! That platformer was born out of so many ideas merged together we ended up with something that we could try to create forever and never succeed. Cosmo’s Quickstop on the other hand was born out of necessity. Limited physics programming, a focus on 3D art and animation, small and easily redesignable levels — all of these things were the right direction for us. But we still had to put our personalities into it, which lead to our current work dynamic.

I think many people would try to keep some sort of separation between their life at work and at home. We, however, approach it in almost the exact opposite way. Our combo system was first designed in a park. Our Hot Coffee Showers amenity was first thought up at a pizza place. We’ve dissected playtest notes while staring up at the branches of a weeping willow. Game-altering decisions were made while playing a game of ping pong at a neighborhood bar. Putting walls between our work and our lives is a great way to keep good ideas out.

We love to make each other laugh. We are the best at it when we’ve had a couple drinks. It’s not uncommon for us to go to a bar, notebooks in hand, for the express purpose of working or for us to spend a Friday night drinking cocktails and playing around on our whiteboard to see what comes out. Bringing fun into the actual design process seems like a no brainer if you are trying to make a fun game.

On the other hand, you must be able to step away anytime you need to. It is well within our norms for one of us to request a night to ourselves, where the other has to leave the house for a couple hours, no questions asked. She’s an introvert, I’m an extrovert, and we both need our recharge time.

But let’s get over all the sweetheart stuff and get down to the real questions: Don’t you two fight? Does a work disagreement carry into your life? Does a life argument affect your work? Yep, yeah, yessiree. Every strong relationship will have conflict in it, whether it be work or personal. That is just the truth of being two unique individuals. When work and personal life merge, you end up with the same amount of conflict, just with fewer people involved, which actually makes it easier to deal with. With all conflict, communication is key. Hopefully, there should be no one that is easier to communicate with than your significant other. You know them, they know you, and you should have a lot of practice considering that good communication is one of the cornerstones of a healthy relationship. The faster you deal with conflict, the faster you can get back at the task at hand. There is no reason to let things fester, no reason to not talk something through to a good resolution.

It’s easy to just say be a good communicator, but how do we specifically embrace that? Well there are a couple of key concepts. First, remember you are a team and teammates trust each other. If you don’t trust the other people on the team, why the hell are you working together? Now this doesn’t just mean trust that they can do their job. It is more about trusting that they are just as passionate and knowledgeable about the project as you are. The more you trust that about someone, the easier it becomes to understand the ideas they are presenting. Which leads into the second point: listen.

Remember that you have different skills, different viewpoints, different influences than others. You have not experienced everything in life, and neither has your significant other. Just because you have a great idea does not mean they don’t have a better one. Just because one of you is having trouble finding the right words to explain something doesn’t mean you should just move on. All of the best parts of our games are collaborative ideas that have been forged with passionate discussion between the team. And that leads to the third point: follow the passion.

When someone really cares about something, they are going to do a good job. Even if you don’t understand their vision, or think it might be wrong, things have to get done. It is better for the passionate person to try because they are much more likely to succeed than someone who cares less. You need to let the passionate person create. Feedback can still be provided and guidance given, but the worst thing you can do is stop or delay that process. The first idea in anything is never perfect, but the faster you start something, the quicker you can make it better.

Finally, we have a backup plan for when we are both standing our ground: our third team member, Bryan. Bryan is just as big of a part of this game as we are, being the creator of all models, rigs, shaders, and most of the writing. He lives a couple states away from us, so you can imagine our dynamic with him is a little different than with each other. He often works in relative isolation compared to us, communicating with chat messages most days and a video call once or twice a month. However, he provides that swing vote when we need it most. If something really can’t be solved between Erin and I, we will bring Bryan in to settle the score. Things are still discussed, cases pleaded, and  filibusters threatened. However, at the end of the day, you can’t get a split vote when three people are involved. And no matter what, you need to accept that. It all falls back to that first point: trust is everything.

Basically, working with your significant other is pretty simple. Trust them, laugh a lot, make things that you both want to make. Do that, and you can’t go too wrong. And if it really goes south, just call Bryan.