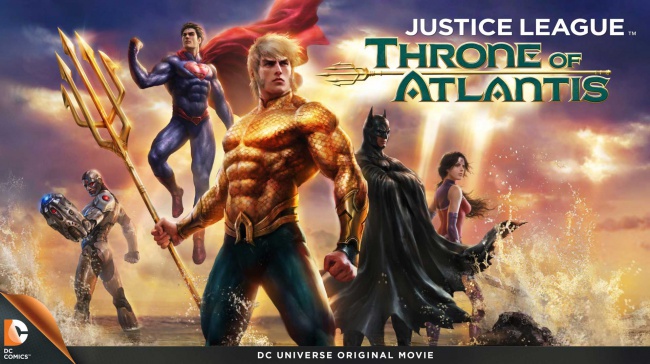 Justice League: Throne of Atlantis is an entertaining spectacle, but Aquaman’s origin story fails to satisfy.

DC Comics used to be the undisputed king of superhero animation. Between Batman, Superman, and two Justice League animated series, it crafted a massive shared continuity that set the bar for all that followed. Today however, DC is more interested in taking television shows in a live-action direction, leaving shared canon for a series of standalone animated films. The latest of these, Justice League: Throne of Atlantis, promised to adapt a popular comic book storyline to DVD, reintroduce Aquaman to the team, and act as a direct sequel to the previous Justice League: War.

For comic fans, that was exciting news. The original Throne of Atlantis storyline was based on the most popular version of Aquaman in years, and one of the few standouts among DC’s New 52 reboot. That alone gave the Throne of Atlantis film a great deal of potential… potential that it sadly couldn’t fully cash in on. While the finished product is still entertaining on its own, Throne of Atlantis isn’t nearly as impressive as what the DCAU managed to achieve in its heyday. While visually impressive and a step above Justice League: War, even at its best you’ll find yourself missing the classics instead.

After the events of Justice League: War, the superheroes who banded together to defeat Darkseid are keeping to themselves, and barely visit their new base in Metropolis. That changes when an American submarine is attacked, its crew brutally killed, and its missile payload stolen by what appears to be superhumans. An investigation eventually reveals the truth – the attack was orchestrated by a faction from the underwater city of Atlantis.

It turns out the Atlantean King was one of the casualties of the Apokolips invasion, killed when a fire pit burst through the waters of Metropolis Harbor. Prince Orm (known to comics fans as the Ocean Master) is using this opportunity to goad Atlantis into destroying the surface world, with the help of American missiles and his agent, Black Manta. With Orm frustrating any attempt at diplomacy, the Justice League has one option left: Help Arthur Curry, a half-human half-Atlantean with royal blood, take his rightful place as the king of Atlantis.

Throne of Atlantis is based on the Justice League/Aquaman crossover event of the same name, adding a few other New 52 references to act as a standalone film. But since this is Arthur’s first appearance in the DC’s new animated universe, it also acts as his origin story and introduction to the Justice League. Throne of Atlantis has a lot to juggle within its 72 minute runtime, and sadly, that means the quality is inconsistent overall. In retrospect, DC would’ve been better served introducing Aquaman back in War, so the film could narrow its focus.

Thankfully, being reintroduced to War‘s Justice League characters is lots of fun. It’s a great reflection of the premise that superhero personalities don’t actually get along so well, and dislike meeting on a regular basis. Batman focuses on Gotham City cases, and considers the League a distraction. Green Lantern isn’t even aware he’s receiving alerts because he’s more interested in flirting with women at the airbase. Superman and Wonder Woman have started dating, and prefer to spend time together when Earth isn’t threatened by disaster. Cyborg is the only hero who spends time at the base, and that’s because he doesn’t feel like a functional human anymore. Making the heroes actually track each other down makes a great post-War reunion, and even offers solid character moments along the way. (The best examples being Clark and Diana’s date, and Batman’s verbal smack-down after Green Lantern botches an investigation.)

Aquaman’s tale, on the other hand, is a much more standard origin story. It’s your typical “chosen one” arc, where a seemingly ordinary man discovers incredible abilities, isn’t sure if he’s ready to embrace his destiny, but does anyway and succeeds with flying colors. It certainly doesn’t help that Arthur and Mera’s lines, which carry the most significance in relaying what’s happening to him, tend to fall flat within the rest of the script. That’s not to say he doesn’t have good moments, but even those tend to be on the ridiculous side – this Aquaman eventually revels in being the hero who talks to fishes, but hasn’t quite made such moments epic the way the New 52 comic series did.

Still, when you have a too-simple heroic story arc, you can always balance it by making the villains more interesting. Sadly, that never happens here. Throne of Atlantis‘ Ocean Master might as well be Generic Supervillain Dictator #28, a character who is evil solely for the sake of being evil. He betrays his own people on multiple occasions to whip up a frenzy for war. He sexually harrassess Mera, who clearly isn’t interested in his advances. He barely even uses his father’s death as justification for invading the surface, and seems more interested in attacking for fun.

In fairness, this wouldn’t be a bad thing if Throne of Atlantis played up the “evil for evil’s sake” angle. But the movie can’t quite get away from its “realistic” New 52 roots, where the Atlantean invasion was a massive political misunderstanding. In fact, I find myself wishing that Ocean Master acted more like his comic book counterpart – A violent but genuinely patriotic leader tricked into war by an advisor. Black Manta could have fit that advisor role perfectly, but the film doesn’t want you feeling sorry for Ocean Master in the slightest. So Throne of Atlantis ends up in this middle ground that’s less satisfying than picking a direction and sticking to it.

The good news is Throne of Atlantis is still fun to watch. Its story is better paced than War, which was basically about meeting the League and watching them fight everything for an hour. Action sequences are well-constructed with satisfying payoffs and take place in a wide range of locations. (My personal favorite is the Atlantean attack on Arthur’s lighthouse.) Throne of Atlantis also borrows some of the monster designs from the New 52 Aquaman series, including a giant Trench monster that really deserved more screen time. If nothing else, Warner Bros. animation team still puts together a slick production, even if it can never match the beloved DCAU.

One thing that irks me however is a problem across DC’s new animated continuity: High levels of violence. Mera is especially prone to this, wielding her water powers to literally maim and decapitate enemies, leaving them in bloody chunks. (And considering most of these opponents are Atlantean military, presumably that led to some awkward conversations. Good thing her boyfriend becomes the king.) But even the Justice League resorts to extreme violence, dispatching Trench creatures and Atlantean soldiers in ways that are impossible to recover from. And that’s not getting into collateral damage, like when Shazam hurls enemies through skyscrapers after Batman said evacuating the city was impossible. Way to go, Billy Batson.

The issue isn’t the violence itself – although I’m sure many parents will cringe seeing their kids watch it. Even Man of Steel, which was criticized for wiping out Metropolis, only had Superman resort to murder in a single extreme case. But when you hear Superman say he’s going to shove Ocean Master’s trident down his throat and you believe him you’ve missed the entire point of what makes these heroes engaging. Resorting to violence clashes with the mythology of these characters, even within the darker New 52. I suspect DC’s animation team is trying to appeal to “adult” demographics, which also explains why Black Manta is dropping an s-bomb for no reason. But even as someone who enjoys fictional violence and profanity, it just doesn’t feel right. Not with these heroes.

That said, Throne of Atlantis is still a serviceable adaptation, and seeing the League reunite here shows promise for future films. Just don’t expect it to be the Justice League you grew up with.

Bottom Line: Justice League: Throne of Atlantis is a fun spectacle, even if it’s not as solid as the original comic book. The League itself is largely well-characterized, and it’s a genuine pleasure to see them together again. Sadly, Aquaman’s origin story is lackluster by comparison, while the Ocean Master isn’t an especially appealing League villain. Regardless, the film will entertain you for its 72 minute runtime, as long as you don’t mind superheroes being more violent than usual.

Recommendation: Fans of DC’s animated films will enjoy this, but we’re not at Justice League Unlimited or Young Justice quality just yet.

Can We Stop Climate Change While Still Living Comfortably?