My king galloped on horseback through the dark forest. We came onto a clearing with a small camp. We set up a fire and made friends with the locals. My king taught them how to hunt and build walls. Over the next few days, we went to neighboring camps and told them of our success. The amazed peasants followed me back to our small settlement. Things were looking up. Then the fifth night came. A blood moon broke through the overcast night sky, an angry mob of demon imps razed my settlement to ash. They stole everything, knocked me off my horse and took my crown. This is Kingdom. This is my butt, kicked. Kingdom is an indie strategy city builder game with a worthwhile challenge. 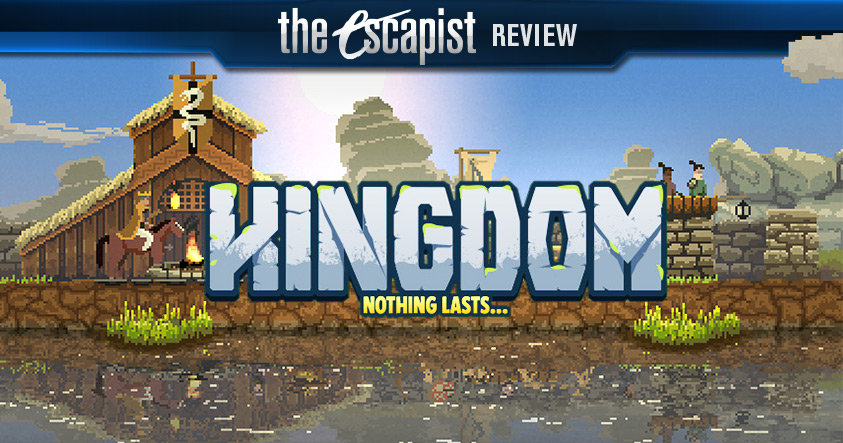 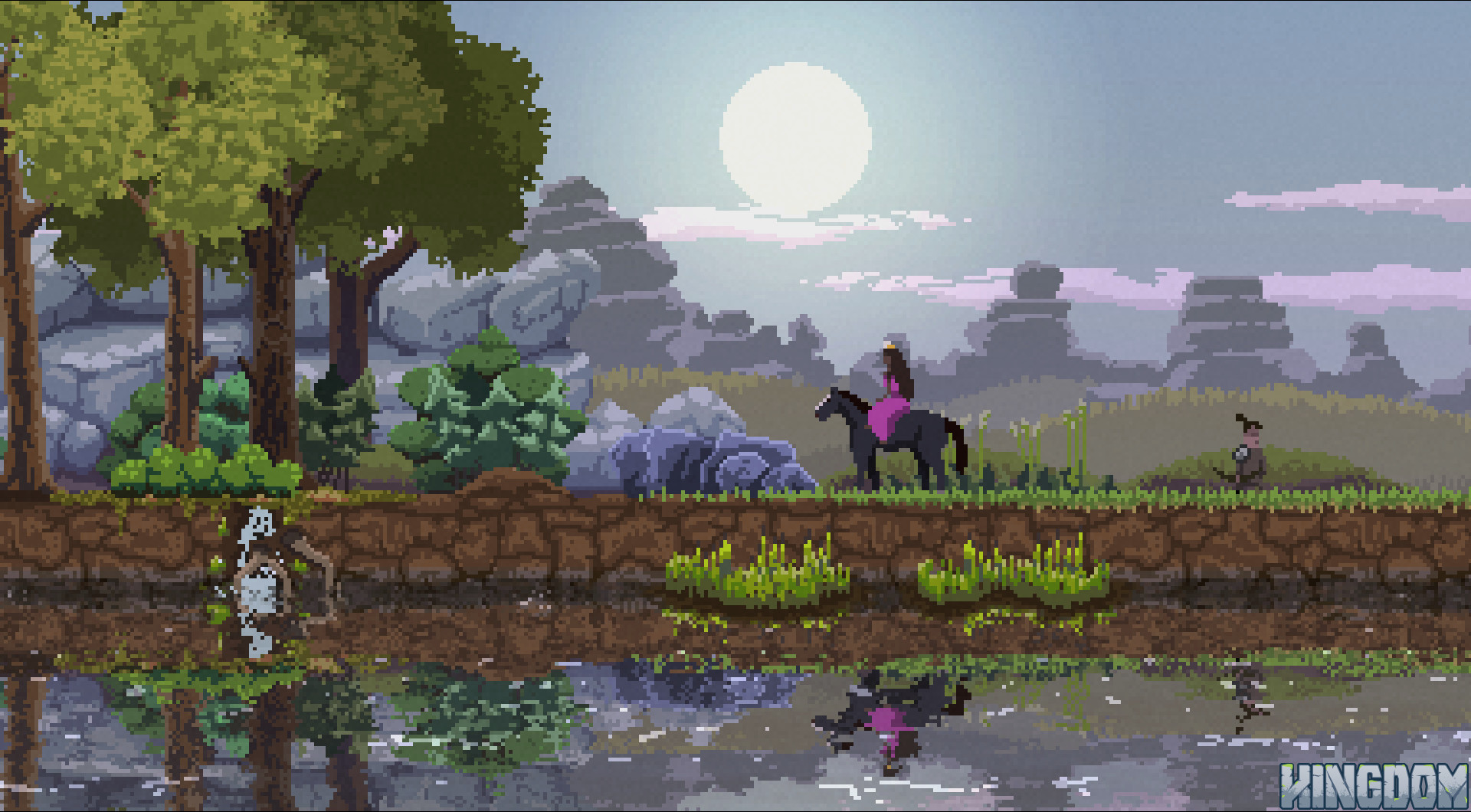 Some believe pixel graphics art is a cop out in indie gaming, but Kingdom puts incredible detail in it from top to bottom. The crowded forest filled with vines, bushes, and other accompaniments breathe life into it. Wooden walls stand against enemy forces, crumbling away with visible damage. The dynamic backdrop changes through sunrise and sunset. Different cloud patterns reflect the weather of the area. Mist can creep its way inward and haze your view. If your kingdom ruler explores the deep woods, the light cuts out – obscured by the trees. As you build your kingdom outward, the background changes to reflect the effects you have on the land. The reflections in the foreground water were an eloquent addition. The ruler has a realistic coin purse too. If you fill your bag with too much money, the coins you collect have a chance of dropping back out of the bag. The graphics of Kingdom worked out to be near perfect.

Your Kingdom is a tract of land that you must build, fortify, and defend from invaders that attack by night. You expand territory by cutting down trees and building your city further out from the center. Builders construct walls, tower defenses, farms, and upgrades. Archers are the primary defense against the night creatures that attack in mobs. They’ve got terrible aim, so it’s best to use as many archers at once as you can. They can also hunt rabbits and deer to get gold. Farmers generate gold on a periodic basis via farming. Their technique is much more efficient than archers hunting for animal pelts.

The progression in Kingdom is rewarding, considering the obstacles you face to get there. Starting a small camp in the middle of the woods clamoring to set up your offense. Working your way forward and expanding out among fierce resistance on a nightly basis. In the later stages of Kingdom you’ll feel a true sense of power the farther your reach is. You have to be smart on how fort planning. Every tower and wall choice matters. A good balance between archers, builders, and farmers is important. How you build your kingdom as a whole determines success chances against enemy mobs. 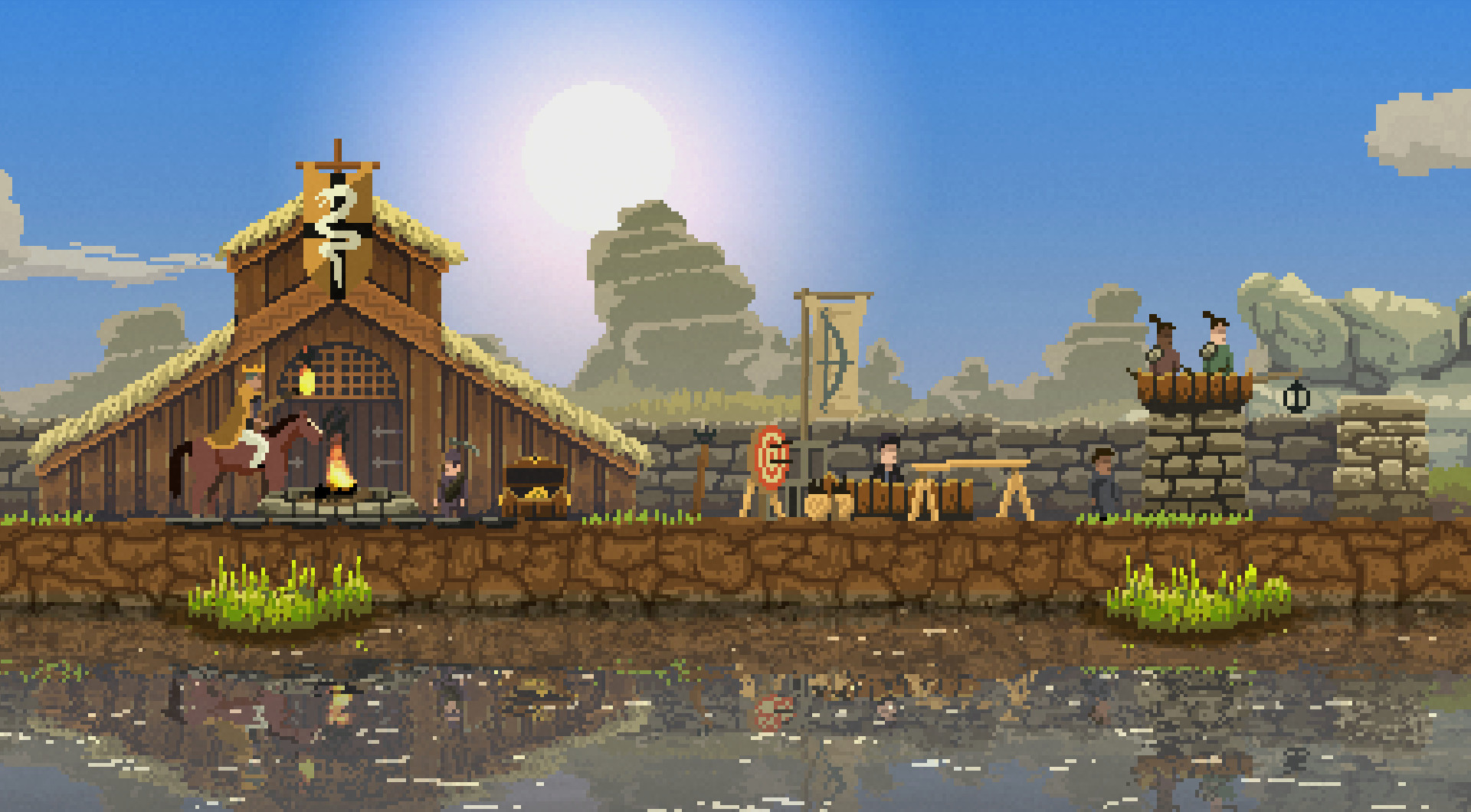 The downside to developing an expansive kingdom is the issue of mobility. Your leader character rides on a medium paced horse that often tires out. Towards later parts of the game you could spend a day traveling from one side of the land to the other. This stage turns Kingdom gameplay into an east side, west side balancing act. If you focus too much on the left or right side of your fort, the mobs might invade town center without you noticing.

The random generated maps system provides a degree of luck to your kingdom potential. Treasure chests deep in the woods provide a significant boost to your available funding. Camps filled with peasant folk to persuade to move to your kingdom for the right amount of coin. Portals of nightmare creatures spawn out waves of beasts. The positioning of these forest surprises contribute to your outcome. The key to winning Kingdom is taking advantage of landmarks as soon as possible. When the fights amp up in intensity you’ll need all the help you can get.

The soundtrack is a huge emotional manipulator. While expanding your kingdom, the game makes you believe that all is peaceful. The music makes you feel like no dangers could harm your quiet fort. But when night falls and the invaders come knocking, you realize the reality of the situation. The soundtrack pulls the carpet out and the battle for your life atmosphere crashes in. Despite your quality defense strategy, the music makes it seem you may not survive the night. 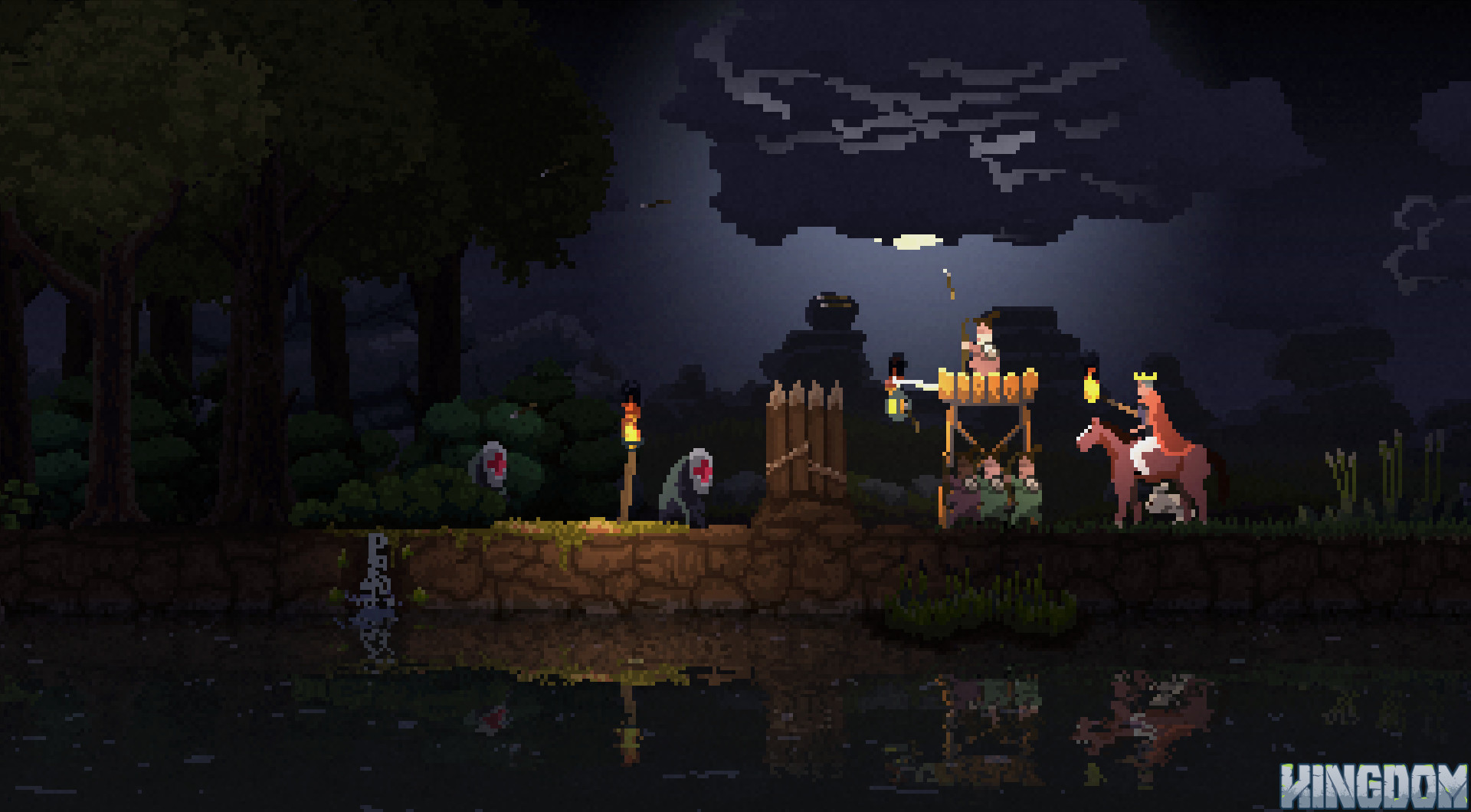 There is a steep difficulty curve in Kingdom. The game sets itself up as easygoing, you’re fooled into thinking it’s not much of a challenge. Your King/Queen ruler has no means of self-defense. Instead they must rely on the diligence of the kingdom’s armies for protection. The defense of your keep is tested when a boss mob arrives every five days. A win condition for Kingdom is possible. But, the developers want people to explore themselves to find it. To put it another way, the aim of Kingdom is survival for as long as possible. In the midst of that, look for a way to beat the monster mob once and for all. You’ll need to be careful how you spend your limited money supply. Kingdom can throw a curveball at a moments notice – misspent coin can be a huge mistake.

I felt disappointed by the limited types of building variety. Your town center has a modest amount of upgrade capabilities in itself. You unlock catapults and other surprises as you progress. But beyond that, there’s only room for towers, walls, and farmland. I know it’s difficult to incorporate different building types without complicating the game formula. Yet, some variation with what kind of towers and walls you could choose from would have been nice. Alternate types of walls and towers that had their own strengths and weakness to them. For example, a choice between a more taller tower and a smaller that had a wider top to it. To help add some customization to the strategy. There’s an insignia on your center town hall that gives your land a sense of patriotism. But that’s not reflected in the towers and wall defenses anywhere. A splash of your kingdom’s colors on the wood or stone surface would have been nice to see.

This game could have used an options menu. There’s a button to see developer credits, languages, change sound level, and go full screen or windowed. But that’s it. I expected a modest video graphics menu in a game where you can toggle the pause menu’s language between ten different kinds. If Kingdom was a console game, it might be able to get away with not having an options menu. But as a PC game, many will expect graphics options that simply aren’t there, if only to help when something breaks.

Kingdom is a good tough game as the setup of it says that “it’s your fault if you lose”. There’s no unnecessary unbeatable enemies. The concept of protecting your kingdom is as satisfying as the challenge to do so. Learning how the A.I. operates is half the fun of it. The detailed pixel graphics and dynamic visual elements came off as outstanding. My only wish was that there was more variety in this formula. The developers calculated their gameplay decisions to provide a hard feat. I think adding more variables into the game wouldn’t be impossible. But it’s easy to get swept away in Kingdom. The game developers executed a deadlock between man vs. monster in a way that I could lose many intense hours in it.

Recommendation: Dark Souls fans who think SimCity is too casual would see Kingdom as an acceptable test of wits.

Cheap Fallout 4 Deals Round Up – PC to Console