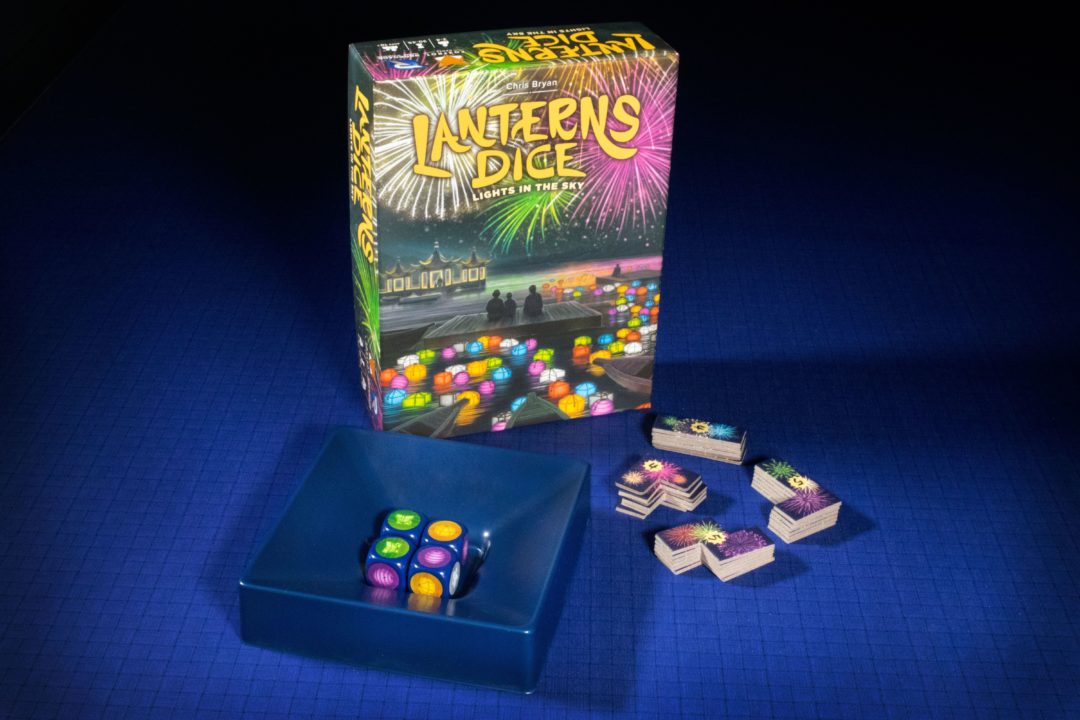 With Canada Day on Monday and the United States celebrating Independence Day on Thursday, this is a huge week for North American fireworks displays. If you’re looking to get into the spirit, you could set off some explosives of your own or play it safe and just challenge your friends to a game of Lanterns Dice: Lights in the Sky.

A standalone game that’s part of the Lanterns series by Renegade Game Studios and Foxtrot Games, Lanterns Dice traces the tradition of celebratory fireworks back to its roots in Imperial China. Two to four players try to put on the most beautiful show by decorating the palace’s lake with colorful lanterns and blocking off areas to set off fireworks. Each player gets a scoresheet in the form of a map of the lake and earns points by receiving honor from the emperor. While it’s the first of the Lanterns games I’ve played, the simple elegant gameplay and visual power of the game made me interested to go back and revisit the series.

Each turn, the active player rolls a set of four dice each marked with a different color into a central tray. The dice have a tendency to get cocked on the edges of the tray, requiring a little shuffling to get them to fall into place. Getting all the dice to set perfectly in one try always earned a bit of praise when we played. Once they’re all in a neat cube, the player arranges the tray to decide who gets what die. Typically they’ll set it so that the color they need the most for their board will be in front of them, but if you can make sure to screw over your opponents by giving them useless colors that’s an added bonus. That latter part is a lot harder considering there are only so many ways you can arrange the tray.

Players then color in a triangular lantern area on their board corresponding to the color die the received. Figuring out which segment to choose is where most of the game’s strategy comes in. The lake is divided into square pools and while some are empty, many contain landmarks that have their own effects. Fill in both the lantern spots around a platform and you’ll get to fill in a lantern spot in an adjacent pool for free, effectively giving you an extra turn that’s much more flexible since you’re not bound by color restrictions.

Every time you fill a lantern area around a pagoda you’re granted a gift. You can cash in between one and three gifts to break the rules by doing things like rerolling the dice or getting to fill in lanterns corresponding not just to your die color but to all the dice that were rolled that turn. Used right, these can be your most powerful actions, resulting in momentum that could let you fill up significant portions of the board and prepare to shower them with fireworks.

Fireworks can only be fired on your turn and take the form of placing Tetris-style pieces on your board in filled areas where they fit. The bigger and more complicated the piece, the more honor it’s worth. But you also want to stand out with an original show, meaning that the first person to place a particular piece gets the most points with diminishing returns as you get further down a given pile. Both the piece shapes and the ways gifts can be used are randomly determined each game, keeping you from getting too comfortable in any given play strategy.

A good fireworks show isn’t all sound and fury, with smaller explosions providing your eyes and ears with a brief break between more dramatic ones. Likewise, negative space is as important as what segments you fill. You’ll earn big points at the end of the game for partially surrounding boats with lights but not if you don’t get the configuration exactly right. You also score points for your second largest contiguous filled in area, meaning you have to be curating multiple sections of your board at the same time and constantly trying to keep them in harmony.

It’s a lot to keep track of and you’re better off shading your squares with a pencil than pen considering how many times I started writing and then realized I was ruining my future plan. My friend who owns the game said he’s planning on laminating a few of the sheets so that he can mark them with dry erase markers, which has the added bonus of ensuring he can play the game as often as he wants without worrying about running out of sheets.

Lanterns Dice is light enough that you don’t need to be a hardcore board game player to understand what the goals are but complicated enough that I was left wanting to try more tactics to improve my score next time around. It’s also fast, with a hard turn limit that’s reduced when you have more players to ensure it doesn’t take more than an hour even on a first playthrough when people are learning the rules. That’s nice when you’re planning on getting in more games or need to get to a real fireworks show.

Why ‘Yesterday’ Is Dividing Movie Critics

New Escapist Podcast – You Can Be and Are Wrong