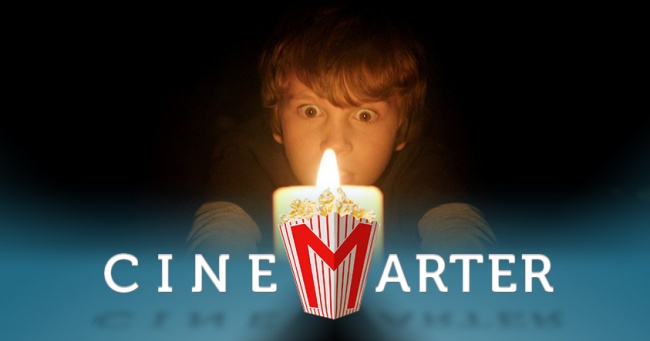 One of the first things someone who’s scared will do is turn on the lights. After all, the darkness can hide the thing of which that individual is scared, and light fixes that. You come home from a scary movie, and maybe you sleep with the light in the hallway on. Lights Out takes this premise to a terrifying conclusion, producing a villain that can only function in the darkness. It disappears whenever light is shone on it. You will never see it fully, and if the lights ever stop functioning – as they frequently do in this movie – you’re done for. Okay, Lights Out, you have my attention.

Lights Out follows one family and two households. The first belongs to Sophie (Maria Bello) and her son, Martin (Gabriel Bateman). The film’s opening kill has their father (Billy Burke) murdered by our villain. Sophie has had a history of mental instability, and her husband’s death has triggered an episode. She’s talking to someone named “Diana.” Understandably, this scares Martin, who becomes afraid to go to sleep. Sophie’s daughter, Rebecca (Teresa Palmer), left home years ago due to similar issues – although under the impression that Diana isn’t real. Shocker of all shocks: Diana is very real, and all of these characters are in danger. 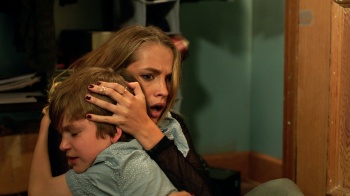 That’s enough of a setup for an 80-minute movie, and Lights Out doesn’t do much to deviate from the “people are haunted by a thing before trying to eventually stop the thing from haunting them” formula. Rebecca takes Martin to her apartment, but they’re followed by Diana. Rebecca then tries to find out who Diana is – or was – before eventually having a final standoff. All the while, lights flicker or become the least reliable things ever with great frequency, Diana pops up out of nowhere more times than you can count, and we all have a good time being startled.

There isn’t much in Lights Out that you haven’t seen before – except that you know where the evil spirit is and it still “gets” you every now and then. It’s a film that never tries to reinvent the wheel and can get away with it because it has a fun premise and knows how to use its tropes effectively. A lean running time of just over 80 minutes keeps it from getting dull. And while it does have a lot of jump startles, their awfulness is mitigated by the idea of the villain, and the film literally showing us all it can – a bunch of darkness – which helps to justifies it, I think.

Lights Out is a simple horror movie that doesn’t try to do much beyond its studio and genre constraints – and it doesn’t really need to.

Director David F. Sandberg made a short film in 2013 with a similar villain. It was seen by Hollywood people, one of whom being James Wan, and now it’s a feature. And it’s not a bad one, which when it comes to studio horror films is always a good thing. Time will tell whether or not Sandberg is a one-trick pony, or if he needs a producer like Wan to be effective in a theatrical environment, but for a feature-length debut? You could do a lot worse than Lights Out.

Teresa Palmer delivers one of her better performances – seriously – as an alt-rock twentysomething who is both trying to figure her life out and overcome the trauma and guilt of her childhood. Maria Bello is great as the depressed and co-dependent mother. Alexander DiPersia is likable as Rebecca’s boyfriend – and the film flips the traditional “commitment-phobia” role from him to Rebecca, which is neat. Gabriel Bateman is not good, but kids usually aren’t. It’s a shame that many of the early scares and emotional moments rely on him – he can’t pull off much effectively.

Lights Out is a simple horror movie that doesn’t try to do much beyond its studio and genre constraints – and it doesn’t really need to. When talented filmmakers get ahold of a solid premise, they’re going to do something good with it. Horror fans should come in droves to this one. A strong idea for a villain, good central characters, a couple of ideas to think about, decent acting from the adult actors, and a way to justify its jump startles allows Lights Out to be one of the better horror films we’re going to see come from a studio this year.

Bottom Line: A good – not great – horror movie. A rarity.

TF2 Matchmaking Update – No More Penalties For Leaving in Casual