This is the spot on The Escapist that you’d usually be reading recaps of Agents of S.H.I.E.L.D. Unfortunately, that series is now on Summer hiatus as it prepares to launch its second season in a few months. You might think that’d mean this space would be empty for a while — or, rather, you might have thought that back before I spent a month and a half recapping the season, speculating on the next and then speculating on freshly-announced sister-series Agent Carter. As it turns out, getting me to forego a weekly paycheck is almost as hard as getting Agents of S.H.I.E.L.D. to definitively end a running subplot.

Fortunately for me, Marvel Comics spawned many, many other television projects prior to Agents of S.H.I.E.L.D., and many of them made important contributions to the pop-cultural landscape that ultimately laid the groundwork for not only Agents but the entire Marvel Cinematic Universe. And since my swank 2007 Nissan Versa isn’t gonna pay for its own gas, I’ll be spending the Summer bringing you my fresh revisitations of these classic (and not-so-classic) television moments.

Sure, the normals had (apparently) enjoyed watching a bodybuilder in green makeup throw paper mache rocks around with nary another monster, alien, cyborg or Thing to give him a real challenge (and no other Marvel heroes to bicker with, period); but we knew him as a gargantuan bruiser who tore whole splash-pages to bits and split mountains with a clap of his hands. Our Hulk — the “real” Hulk — was (by the time I was a regular comics reader in 1987) the most talked-about Marvel book on the shelves thanks to an epic, character-redefining run on the title by Peter David. TV’s Hulk was a re-skin (if that term had existed then) of The Fugitive with Lou Ferrigno showing up once or twice an episode to break up sets in slow-motion — hell, Bruce Banner didn’t even have the right name! And so we (and just to be clear: By “we” I mean tail-end Generation-Xers born after ’79 or so) by and large turned up our noses at “that” Hulk and waited for Hollywood etc to figure out how to pull off a “proper” one. 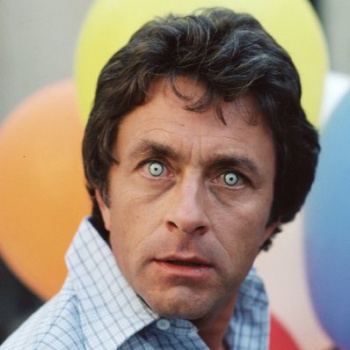 It wasn’t until years later, when the Sci-Fi Channel (they used to spell it right, believe it or not) began re-airing it in reruns, that I gave “70s Hulk” a chance and came to recognize what my parents (and older peers) had seen in it. The Incredible Hulk is not a particularly “faithful” adaptation and, if we’re being honest, it probably didn’t use even its own scifi premise to the fullest potential — but it was a good show, and its effect on the history of comics and their adaptations can’t be overestimated.

For those not immediately familiar: In this version, Doctor David Banner (apparently a TV producer ordered the change because “Bruce is a gay name”) is a physician conducting experimental research aimed at figuring out the “secret” by which some people have been observed demonstrating superhuman strength in order to aid loved ones in distress — and why he couldn’t to prevent his wife from dying in a car wreck. Theorizing that it has something to do with “gamma radiation,” Banner experiments on himself, unwittingly altering his physiology in a manner that causes him to transform into a musclebound, animal-like brute with its own separate personality (and child-level intellect) in moments of extreme emotional or physical stress. A second lab accident leaves the creature the media dubs “The Incredible Hulk” blamed for the murder of a colleague and Banner himself, so he begins to travel the countryside seeking a way to control or cure his condition… pursued by a determined news reporter who wants to know who (or what) The Hulk actually is. 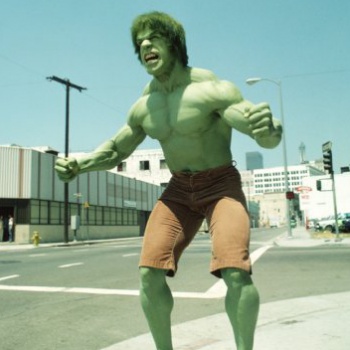 What might be the most important element of the series existence is that it’s one of the first times that anybody recognized that a “serious” series aimed mainly at adults could be conjured from a comic book. That may seem like second nature today, but in the late-70s even as Star Wars and Jaws were dominating movie theaters and making genre films the kings of the box-office, the general assumptions were A.) comics were only for superheroes and B.) superheroes were strictly for kids cartoons and winking all-ages comedy a la the 60s Batman. (Superman, as ever, being an American Icon left him exempt from the limitations of his original medium.)

That an honest-to-God great hook for a serious prime-time TV show — an episodic riff on “The Wolf-Man” or “Jekyll & Hyde” crossed with the universal fantasy of being able to will oneself into an ubermensch when pushed — could be yanked from a funnybook was the final tug that dragged comics fully into the “grownup” adaptation-fodder discussion alongside books, plays, etc. That it was one of Marvel’s heroes, and the character that best exemplified the “weirdo/antihero” vibe of the company’s stable, was the ultimate branding of Marvel as the “hip” side of the Big Two. And while multiple attempts to make the lightning strike twice mostly came up short (we’ll get to those, don’t worry), I’d contend that it’s unlikely we’d have seen either the production of Tim Burton’s Batman or the multi-studio buyups of Marvel movie-rights in the 90s — the twin phenomenons that led to our superhero-saturated present — without the success and popularity of The Incredible Hulk still fresh in Hollywood’s mind.

Does the show hold up? Well, for the most part. Watching TV from the era when episodic storytelling was the norm and longform story-arcs were rare (because when and how would anyone mass-rewatch a TV show?) is an adjustment now even if you lived through it. Queuing up an episode without research leaves you open to seeing a “filler” installment rather than one of the good ones they actually worked hard on… And even if you enjoy the majority of hour-long stories in which Banner 1.) arrives in a new town, 2.) picks up an odd job, 3.) witnesses rotten local shenanigans, 4.) tries to stay out of it, 5.) doesn’t stay out of it, 6.) becomes The Hulk, 7.) saves the day and 8.)is forced to move on… watching it happen over and over again instead of once a week can be tiresome. 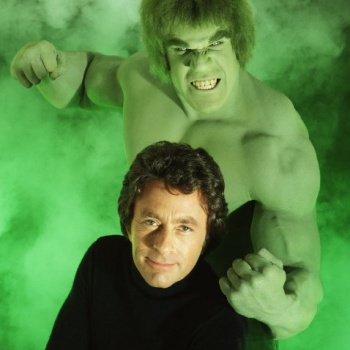 BUT! At its best, The Incredible Hulk is a lot of fun. Bill Bixby was an immensely likable screen presence, and comics fans can be understood for wishing the proactive super-scientist of the comics was more present he plays Banner’s hangdog reactions to his circumstances in a believable way. The comics Hulk is mainly consumed with battling military foes and other monsters, but Bixby’s Banner is mostly dogged by how much of a pain in the butt being The Hulk is. In keeping with that, using the reporter (“Mr. McGee”) as a ticking-clock to keep Banner moving a nice nod to how difficult it’d likely be for the real world to accept something like The Hulk even existing — the show is two seasons old before McGee even figures out how Hulk seemingly “vanishes” shortly after every appearance.

And yeah — though he’s not really allowed to “act” much as The Hulk, Ferrigno was always a charismatic presence. In a way, he and Bixby’s double-act was the ultimate solution to both the longtime TV problem of extreme physical specimens ideally suited to over-the-top action not always being a good fit as dramatic actors (and vice-versa). The onetime Mr. Universe’s particular problem of being a natural born action hero held back from screen stardom by his speech difficulties (Ferrigno lost 80% of his hearing due to childhood ear-infections, which affects his enunciation): The capable dramatic actor handles the dialogue and character beats, then “transforms” into the athletic superman to handle the action.

Much as I’d like to find some obscurity to champion instead, I tend to agree with what seems to be the majority opinion that the show’s “best” episode was “The First,” a two-parter in which Banner seeks out a man who supposedly became a Hulk-like creature (this one played by the late Dick Durock, a 6’6 stuntman and actor perhaps best remembered for playing Swamp Thing in both the 80s movies and short-lived 90s TV series) 30 years ago — but was cured. It gets a lot of attention, naturally, since it’s the only episode where we finally get to see The Hulk fight another super-powered creature, but it’s also a terrific encapsulation of the series at its best.

The Incredible Hulk ended with an abbreviated fifth season in 1982, but the story didn’t. Six years later, the franchise was revived for a trilogy of made-for-TV movies — two of which were designed to launch other Marvel Comics characters to series of their own. Next week, we’ll talk about those.

8 of the Deadliest Volcanoes