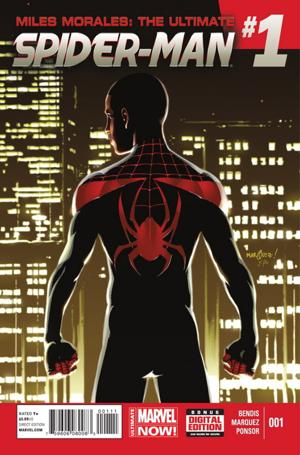 The first issue has a lot to recommend, but is the whole thing another tired marketing event?

I will come right out and admit that I was among those who weren’t happy with the decision to kill the Ultimate Universe’s version of Peter Parker.

No, I wasn’t among the moron throngs complaining about the prospect of a multi-racial Spider-Man. It was more a matter of my just not liking that turn in the story and feeling like the character was simply being sacrificed to provide an excuse for Marvel to market another event it could use to drive up comic sales.

All of these feelings were, of course, made more potent by the fact that I was really attached to the Ultimate Peter Parker. When I first started getting back into comics in a major way a few years ago, it was his adventures (which I marathon-ed via trades) that really played the biggest part in cementing me as a regular comics reader. The death of his character legitimately hit me hard, especially since the tradition of the Ultimate Universe is that dead characters stay dead.

I’m saying all of this because I really feel some context is needed to fully understand why Miles Morales: The Ultimate Spider-Man 1 rubs me the wrong way.

For all intents and purposes, the first issue of the Marvel Now relaunch of Ultimate Spider-Man just continues Miles story, which currently sees him something of a bad spot. With the events of recent Cataclysm story behind him, Miles finds himself blamed by his father for the death of his mother earlier in the series. Feeling distraught, he considers revealing his secret life as a crime fighter to his girlfriend Katie Bishop. Unsure of what to do, he goes to Peter Parker’s former girlfriend Mary Jane for advice.

Now to be clear, all of this stuff worked for me. My biggest consistent joy with Miles’ character, in fact, has been the development of his own unique problems and seeing how he responds to them both in the context of his life, and the experiences of those who came before him. Just like Ultimate Spider-Man at its inception was interesting to read in part because of its modernized and refined take on the main universe character’s extravagantly complex mythos, Miles was fun because of how fresh his outlook felt. He was literally a brand new set of eyes through which to filter the experience of being the friendly neighborhood Spider-man. It really bothered me, in turn, when issue 1 ended potentially indicated that Ultimate Peter Parker could be coming back from the dead.

Granted, the book lays groundwork to go elsewhere and it’s more than possible that issue 2 will land in my subscription box and completely flip this twist on its head. Even so, it just felt wrong to me. As much I hated Brian Michael Bendis killing off Peter Parker, the fact that he was actually dead lent his demise a sense of poignancy that you often don’t find from superhero comics. The Ultimate Universe has frequently been far from perfect, but it’s still managed to establish a unique weight to events that you just don’t get in main-line Marvel, where death is cheap and almost every character demise results in their inevitable return.

Add to this that the issue also features the resurrection of Norman Osborn, and my hackles were raised even further. The Ultimate version of Osborn is the one of the few characters that’s been seemingly immune to Universe’s permadeath standard. He’s been stabbed, shot and pummeled into seeming oblivion on multiple occasions and yet he always seems to come back when the series needs something to get the plot moving again. In fact, part of the reason I could live with Peter Parker kicking the bucket is because it looked like he’d finally taken Osborn down for good in the process. To have him suddenly surface feels, plain and simple, like a revocation of that victory.

I admit this could just be me, however. After all, aside from these plot points I can’t really complain about anything else in Miles Morales: The Ultimate Spider-Man 1. The comic, on its own, is a fun read filled with great art and enjoyable dialogue. Taken as a stand-alone property, I liked it quite a lot. It’s the possible implications for the series as a whole that have me worried. Ultimate Spider-Man has arguably been the strongest and most consistent in the Ultimate line. A huge part of this has been the wise grounding of the series in smaller, more personal battles. I’d hate to see it take a wrong turn by indulging in what is probably the worst cliche of comics.

Bottom Line: Great art, decent story, but it feels like all setup for a return to the status quo.

Recommendation: It’s worth your time. Read it, but keep a grain of salt ready.