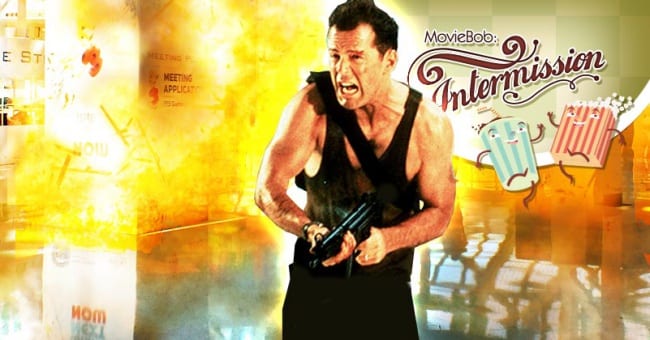 E3 turns into a bigger and bigger event every year, and next week’s show is expected to be no exception. In fact, the show has gotten so big that it’s recently managed to attract the attention of a major Hollywood movie studio!

Sure, the idea of basing a movie around an electronic gaming exhibition may sound strange; but once upon a time we said the same thing about movies based on theme-park rides, building-blocks and seasonal marshmallow treats. Besides, the studio’s logic was very sound: E3 is a recognizable franchise with the opportunity to cross-brand with multiple profit-generating IPs!

Which is why it shouldn’t surprise you that the studio has already commissioned a screenplay, which – through channels that I’m not at liberty to divulge – I’ve managed to obtain a rough draft of. Obviously, I’d be putting myself at some substantial risk to just publish the whole thing, but I figured you all might get some amusement out of seeing a few choice pages:

INT. TAXI – DAY
Sgt. Dirk “Lone Wolf” Hardeman, USMC, rides in a cab bound for E3. Recently returned from combat, he aims to reconnect with his estranged ex-wife Tress R. Touwhin, a gaming company publicity manager working the event. She probably left him because she thinks his simple, all-American ways are boring; but we know that Dirk is awesome because he’s an army man and that’s awesome. He is also the first white person we have seen in the movie, so we know that he is the hero. (Note: unless we can get Will Smith or the Django guy.)

As the cab rounds the corner, we see the huge Convention Center. Hardeman eyes the throng of colorfully-dressed attendees, puzzled. He taps the shoulder of the Cab Driver, a Jamaican man with cartoonishly-elaborate dreadlocks so that we know he’s Jamaican. (Note: Or maybe some kind of Indian? The main thing is for his accent to be sorta funny.)

We see Cosplayers in strange costumes, many of them are overweight or look like nerd weirdos – not awesome army guys, like Dirk Hardeman. (Note: Put some hot girls around too. Maybe have one of them look really hot, but then she turns around and it’s a guy – that’s always funny.) Dirk looks confused and vaguely disgusted.

DIRK HARDEMAN
Do they were work here?
CAB DRIVER
Dem? No mon, no! Dey just be dressin’ up for
fun! I tawt you be onna dem at first wit yer
Army gear and such. Tawt maybe you was
supposed to be from Call of Duty!
DIRK HARDEMAN
…”Call of Duty?”

(Note: This is how we will know that Dirk does not know about video games, because he is a real tough man and a cool guy. This is where many jokes will come from.)

CAB DRIVER
Yah mon! Tis a game, where ya fight in de war!

DIRK HARDEMAN
(eyes narrow, serious and grim)
War… is not a game.

Dirk has discovered that Tress’s job is something called a “booth babe” (note: Do we know this is what they’re called? Find that out, because that kind of detail will make or break suspension of disbelief on this thing), which means she has to dress up in a skimpy costume. Dirk told her she did not have to do this, as his army man money can support both of them, but she got crazy and yelled about her independence like a silly woman. So Dirk is drinking a beer, like cool guys do when they are angry, and making small talk with Doug, a young nerd who will become his sidekick. (Note: Can we get “McLovin?” We should get “McLovin.”)

DIRK HARDEMAN
So what do you do, Doug?
DOUG
I’m a pro-gamer!
DIRK HARDEMAN
Heh. I meant for work, kid.DOUG
That’s, uh… that’s my work, sir. Uh,
Sergeant sir. I’m a professional gamer.

DOUG
Oh yeah. My team is giving a
presentation for…

Suddenly, there is a HUGE AWESOME GASOLINE-FIRE EXPLOSION in the middle of the show-floor! All the lame exhibition people get thrown around through great big fishtanks that are all over the place for some reason, but Dirk’s awesome army skills keep him and Doug safe and out of sight.

A team of terrorists wearing kickass black tactical gear (note: but also those head-cloth things, or else how will we know they’re terrorists?) repel down from the rafters and start shooting everybody, but then stop so their leader can take off his mask and talk. He is Willem Dafoe. Or John Malkovich. Or a different actor that people will immediately know is the bad guy.

TERRORIST LEADER
Attention! Video-game glitterati! We are
North Korean Al-Qaedas! We have been
conscripted by the Russians for this mission,
and this building is now under our control!
(beat)
Now, which of you is President of Xbox??

(Note: This can be the Sony one if Sony ends up producing this, right?)

PRESIDENT XBOX
I am the President of Xbox. You
can take me, but let the others go.
DIRK HARDEMAN
(whispers)
That’s one brave guy.
DOUG
(whispers)
Tell me about it. Did you know
they tried to mandate The Kinect?TERRORIST LEADER
The circuit boards for your Box of X
can be converted for missile guidance.
Mother Russia will make use of this…
once you give US the encryptions!

Dirk jumps up like a badass, firing a gun he somehow now has and killing four terrorists allowing the President to escape! Dirk escapes too, because terrorists are bad shots and only manage to destroy several more fish tanks.

INT. BASEMENT
Dirk and Doug have fought their way into the cellar to regroup. Dirk is trying in vain to tell Doug that he can handle the terrorists alone, even though he totally understands Doug’s need to prove himself now that he has met a real man who fights real battles and is awesome.

DOUG
I can do this, Sarge!
DIRK HARDEMAN
Not gonna happen, kid.
DOUG
You can’t fight them all alone!
(beat)
And, besides… I need to do this,
sir. All my life I’ve fought in
fake battles on TVs. This is my
only chance to do something REAL!
Something that MATTERS!DIRK HARDEMAN
Hm. Alright, kid.

DOUG
Yes! So what’s the plan?

DIRK HARDEMAN
You get to the control panel,
get the Wi-Fi turned back on and
call the cops, FBI, CIA, all that.
After that, get as many hostages
as you can to the escape tunnels!

DOUG
What about the terrorists?

Doug starts to run off, but Dirk stops him. As Dirk stands, we now see that there is a big American flag hanging behind him.

Doug nods and hurries off. Dirk watches him leave, grimly.

INT. MAIN LOBBY – NIGHT
With Dirk busy having giant gunfights in the upper levels, Doug has led Tress, President Xbox and other hostages to the exit lobby in the shadow of a giant statue of a soldier from the next Call of Duty (note: if Battlefield offers us more for product-placement, would we need a different statue or just the logo?) but Terrorist Henchman #2 appears to block their exit.

DOUG
You guys get outta here.
I’ll hold him off!

TRESS
No, Doug! You’ll be killed!

DOUG
(smirks)
Nah. Lady, I liberated the
Lylat System when I was twelve!
This guy ain’t nothin’!
(serious)
Look… I’ve respawned a million
times, and it never meant anything.
Dyin’ for real… and least I get
to go out for a reason. Go.

Hostages flee as Doug and Henchman #2 trade mid-air dual-wield gunfire. Doug takes many, many bullets to his chest but doesn’t immediately die. For some reason, parts of the floor are now on fire.Bleeding out, Doug climbs up the Call of Duty statue as #2 continues to fire. With the last of his strength, Doug pulls a huge metallic ACHIEVEMENT symbol “patch” off the statue’s shoulder (note: this is a reference to the game, right? Add more of those, and point them out more obviously) and throws it like a Frisbee DECAPITATING HENCHMAN #2! Doug breathes his last, slumps across the statue’s mighty camouflage-clad shoulders.

INT. MAIN STAGE
The building is collapsing all around itself, with lots of awesome explosions and fiery debris. Tons of the big displays and booths are on fire, especially the one where Tress would’ve been wearing her stupid costume which is ironic or a metaphor for something.Only Dirk and the Terrorist Leader remain, standing on the stage while the big screens display random glitchy game footage behind them. Terrorist Leader still has the samurai sword he stole from that one cosplay girl who fought so bravely until the end against the Henchmen in Scene Twenty-Six, thus teaching Dirk about not judging books or something. Dirk, unarmed, has the flash drive with the last of the encryptions.

TERRORIST LEADER
Give me the encryptions!

TERRORIST LEADER
Why do you fight so hard, American?
You, who do not even have a weapon?
(gestures at screens)
Look around you, comrade infidel!
This is what you protect? A fake
country of plastics and beeping;
whose children worship heroes of
plastics and beeping instead of
true men of war like you.
Hah! In fact, you should be
(beat)
ROOTING for me to destroy it
all, now and forever!!!

DIRK HARDEMAN
I used to think like you, pal. But
I learned something today. Heroes
come in all sizes, and this E3?
This place was full of `em. Not
just Ghost or Ezio or Kratos or
Shepherd or any of the other funny
names I learned today…
(beat)
…but also President Xbox for standing
up to you. Or that brave kid whose
sword you took. Or the guys toughing
it out on the booth lines. Or the
game journalists braving exhaustion
just to get the early scoops. Or
Tress. Or my pal Doug.
(beat)
Yeah… I used to think like you…

DIRK produces a pair of WII REMOTES tied-together at the wrist-straps, spins them like those Ninja things! (Note: We think they’re called “numbchunks.” Look into this.)

Dirk and Terrorist Leader have a TOTALLY SICK MARTIAL-ARTS FIGHT with their weapons, then their fists, until Dirk finally crushes his nemesis to death with one of the huge stage speakers.

EXT. CONVENTION CENTER – NIGHT
Dirk exits the building as it all explodes behind him in a ginormous orange fireball against an inexplicably teal-blue night sky. He casually tosses the flash drive to President Xbox, who nods in solemn recognition of mutual masculine respect.

Tress runs up to Dirk and throws her arms around him, their prior relationship difficulties having been rendered moot by his awesome terrorist-killing skills. They almost kiss, but are interrupted by a group of businessmen – one of whom the audience will recognize as a Famous Game Designer making an amusing cameo. (Note: Do we have a target on WHO, or are we just going with whoever makes the best offer?)

FAMOUS GAME DESIGNER
Excuse me, are you Dirk Hardeman?

DIRK HARDEMAN
Who wants to know?

FAMOUS GAME DESIGNER
Indeed! Indeed! We want to talk
To you about possibly licensing…
well… “you” to be the hero of
our next big game?

FAMOUS GAME DESIGNER
Yes, really! After today, well…
(beat)
I think it’s high time we gave
these kids a true American hero
to look up to in their games! Oh,
with a generous compensation for
yourself, of course, Sergeant!

DIRK HARDEMAN
(catchphrase to be determined)

All laugh. Fade out on American flag billowing in front of the still-smoking wreckage.