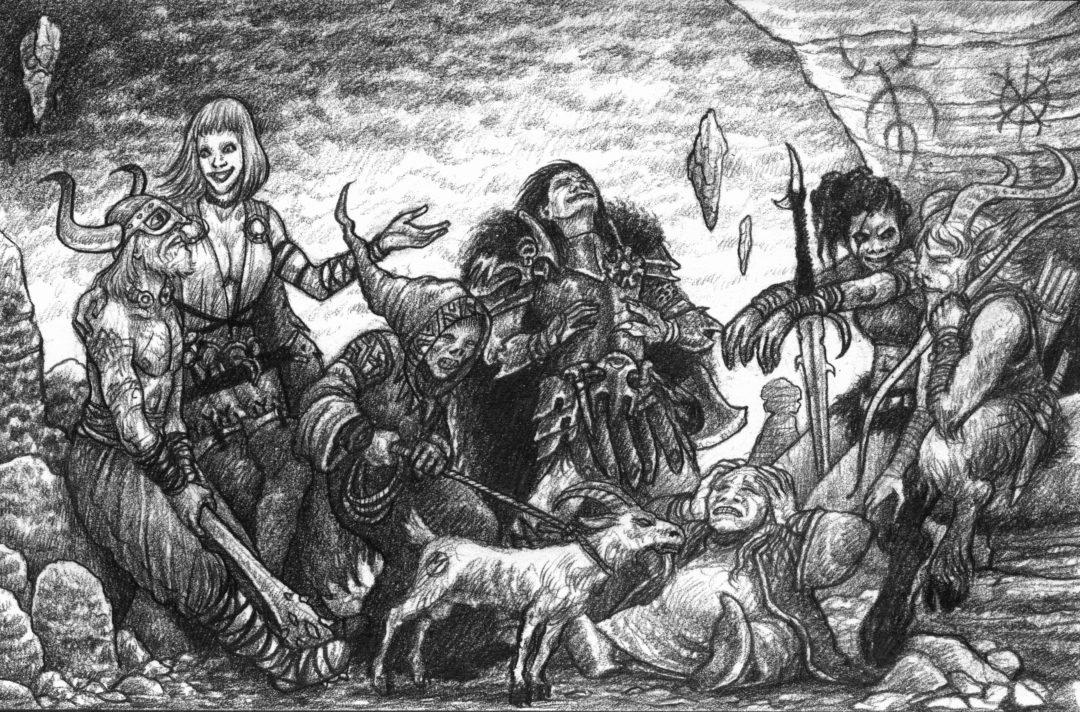 “What does grim & perilous gaming even mean?”

This is a question I usually hear as someone lifts up the 4.5-pound Zweihander Grim & Perilous RPG tome at my local gaming store or jumps into a conversation online about dark fantasy games. It is an immediate gut reaction some people get as they look at the cover: that “grim & perilous” implies this game isn’t going to be as pleasant or fun as other tabletop role-playing games.

But the words plant a seed into other readers’ minds, telling them that this game won’t be like any other they’ve experienced before. In Zweihander there are real consequences for failing dice rolls, and we often like to joke that “naps don’t heal stab wounds.” The choices you make for your character won’t have the rippling, world-spanning implications found in traditional tabletop role-playing games. Instead, they will change your character in a way that alters their psyche, outlook, and values, both mechanically and narratively. 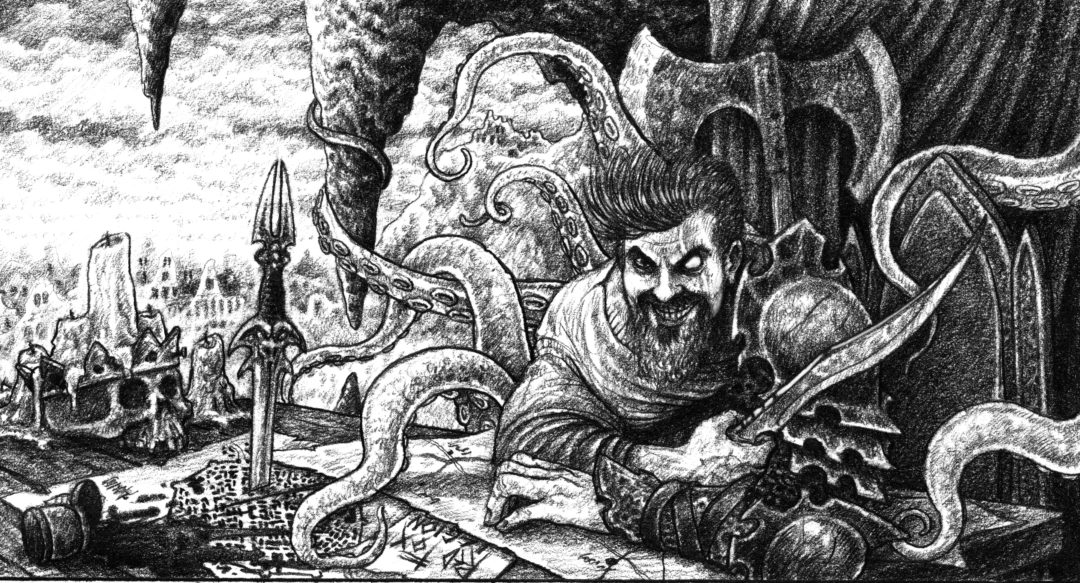 Before we dive in, let’s take a step back to talk about the self-styled “world’s greatest role-playing game” – Dungeons & Dragons. D&D is by far the most recognizable game in the industry. It has become part of the cultural zeitgeist. Its books are sold in Target, it has its own clothing line and high-end luxury accessories, and celebrities publicly play games. D&D lets players create a myriad of larger-than-life heroes, but they are often asked by non-player characters to take on what essentially boils down to paid wetwork and plunder. While campaign storylines try to camouflage this fundamental truth, characters are usually charged to mow down anything that stands in the way of the story.

As the game progresses, they’ll pull their weapons down like a lever through a host of monsters that act like slot machines with the chance to spill out gold and magic items. There are three modes of play in D&D: combat, exploration, and social interaction. However, the rules for the social aspects aren’t written with the same breadth or respect as combat. There also aren’t explicit mechanics to deal with the messy aftermath of how bloodshed changes a character’s mindset. Players just wipe the blood from their swords away with a “long rest,” mop up the mess they made using a handful of social ability checks, and move on, ignoring the implications of what impact murdering a menagerie of monstrous foes would have had on their characters’ minds.

Zweihander Grim & Perilous RPG deals with the trauma and repercussions of brutality wrought by the hands of its characters. The game isn’t about characters who change the world. It is instead a story of a world that changes the characters who live in it. Given these considerations, it’s easy to believe that a nihilistic principle guides the character journey. However, not all is lost. Fortune has smiled upon Zweihander characters for one reason or another. There is a greater role for them to play in the grand scheme of things. This is reflected through Fate Points, a meta-mechanical means to escape bad rolls and avoid permanent injury or death. Much like a “get out of jail free” Monopoly card, these points allow players to edit the scenario in their favor, mechanically illustrating the way Fate has chosen them above all others in the narrative.

Zweihander’s gameplay isn’t about good versus evil but about truth and consequences. Its world exists in the many shades of gray between rare extremes of black and white. Short-term solutions are likely to have more harmful consequences in the long run, but they deal with immediate problems. Grim & perilous gaming presents a world where cynicism and the disintegration of society (chaos) is pitted against idealism and belief in a better tomorrow (order). These two principles often blend together, feeding off one another in an eternal tug of war.

Characters will be presented with an axiom that reflects order and chaos within their own identity, called Alignments. They are two distinct yet similar personality traits (such as Heroism and Martyrdom) that reflect their inner ebb and flow between order and chaos. They represent shifts in the character’s psyche and soul that happen as the adventure unfolds. Should they follow the path of order, they gain more Fate Points. If they lean towards chaos, they develop Disorders: reflections of their darker self mechanically manifesting in the game.

Unlike the archetypal D&D hero, characters in grim & perilous games are not wide-eyed neophytes destined for greatness or near godlike warriors capable of saving a village from an evil dragon. Instead, they are ordinary people fighting for their convictions and trying to retain their sense of humanity in the face of impending doom. The story of a Zweihander game is about self-realization and uncovering the brutal truths of the world. 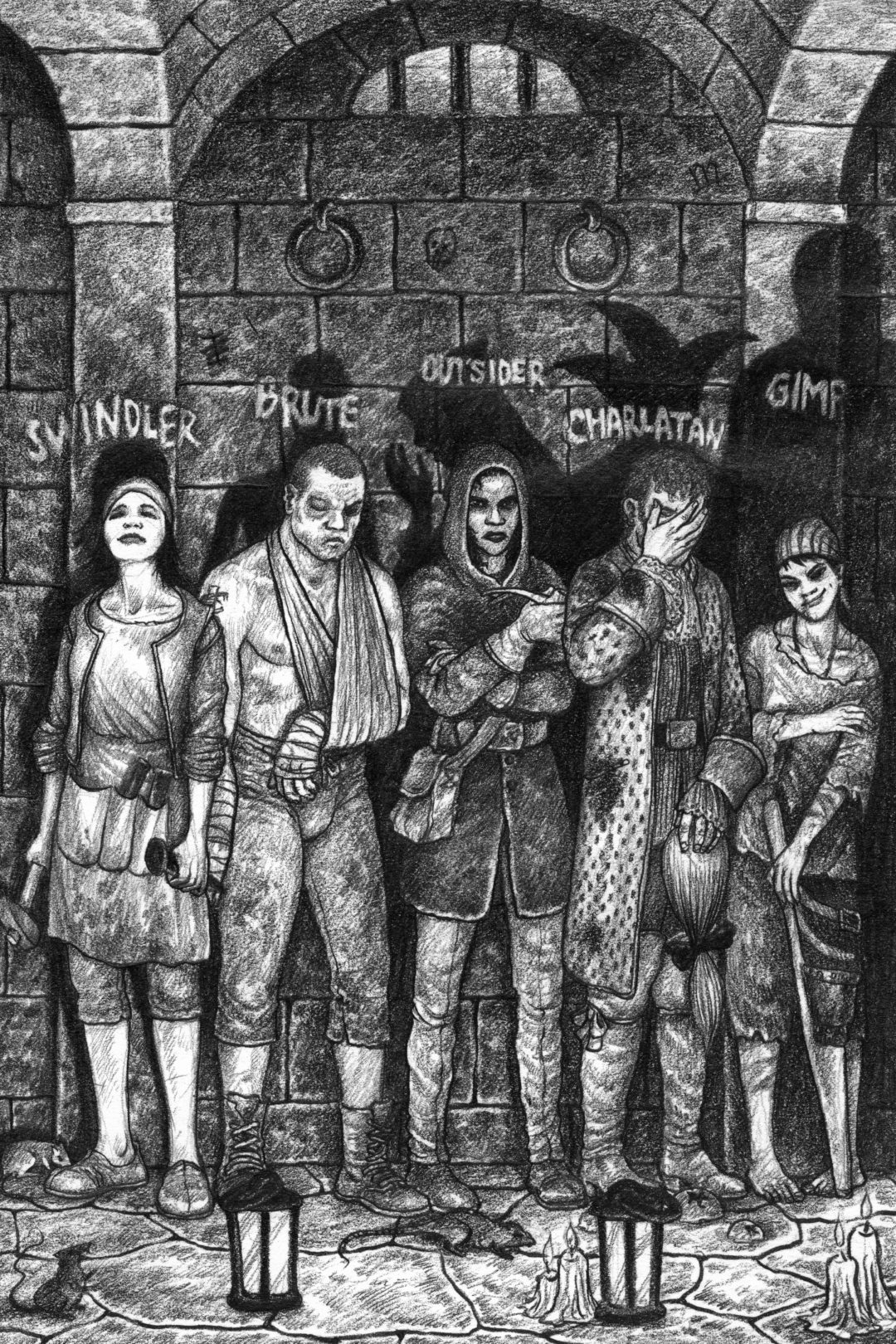 Characters will uncover deeper mysteries, reveal double-dealings of upstanding men, and expose corruption at its very core, but will they debase themselves in the process? Will they rise above the brutal truths of the world or root around in its filth, becoming akin to their enemies? This defining conflict of Zweihander is realized through the use of distinct Social Intrigue mechanics – a touchstone that players will oftentimes have to lean on to navigate precarious situations where swords and wands won’t solve their problems.

D&D provides optional systems to make the game deadlier. More often than not, a Dungeon Master will ignore these rules because they are inelegant and don’t fit with the game’s overall design principle. In Zweihander, these rules are integral to the entire experience. The game doesn’t present a world of magical warriors but one of real people in unfortunate situations. Real people have to eat. They get sick and must take time to recover from their wounds. Sometimes the scars they gain – both physical and psychological – are just too deep to mend.

The lingering ghosts of past mistakes scar real people, and in Zweihander they are given just as much attention as a punctured lung or a filthy cut. If characters do not perish from blood loss, they may end up gibbering in an asylum, inserting a brass barrel of a blunderbuss into their mouth to meet death, or resorting to wine and opium to chase away the nightmares. 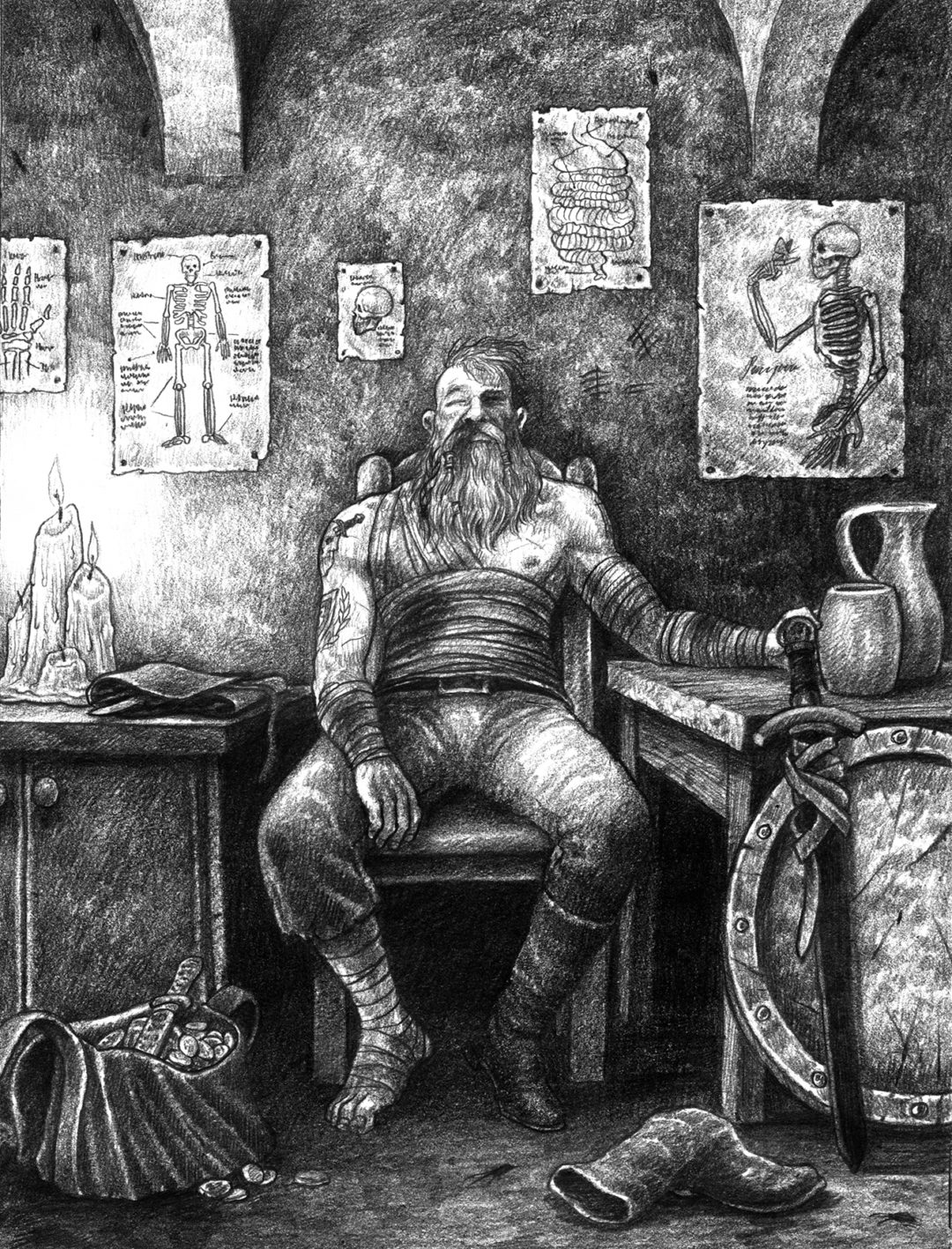 Understanding the basics of how to adjudicate aspects such as psychosurgery, disease, starvation, healing, and treating injuries is important. In Zweihander there is no magic that can easily bring the dead back to life; there is no tincture to reattach an arm chewed off by a wolf; there is no godly boon to wipe away the terrible memories of a friend being slaughtered. Even medicine has a chance to cause sepsis and painful death.

Despite its entropic grasp, chaos is as vital to the growth of a grim & perilous game as order and balance is. It drives many of the underlying themes in Zweihander and promotes a concrete reason for adventurers to band together to rage against the dying of the light. Hope is often a pale glimmer, and even a major victory is just a small blip on the timeline of reality.

Characters will gain Corruption during critical narrative moments where they give in to negative emotions and selfishness or experience moments of personal weakness in perilous situations. Corruption may be bestowed upon a character if they participate in criminal activity, political backstabbing, unethical deeds, acts of violence (even if justified), or unholy rituals. 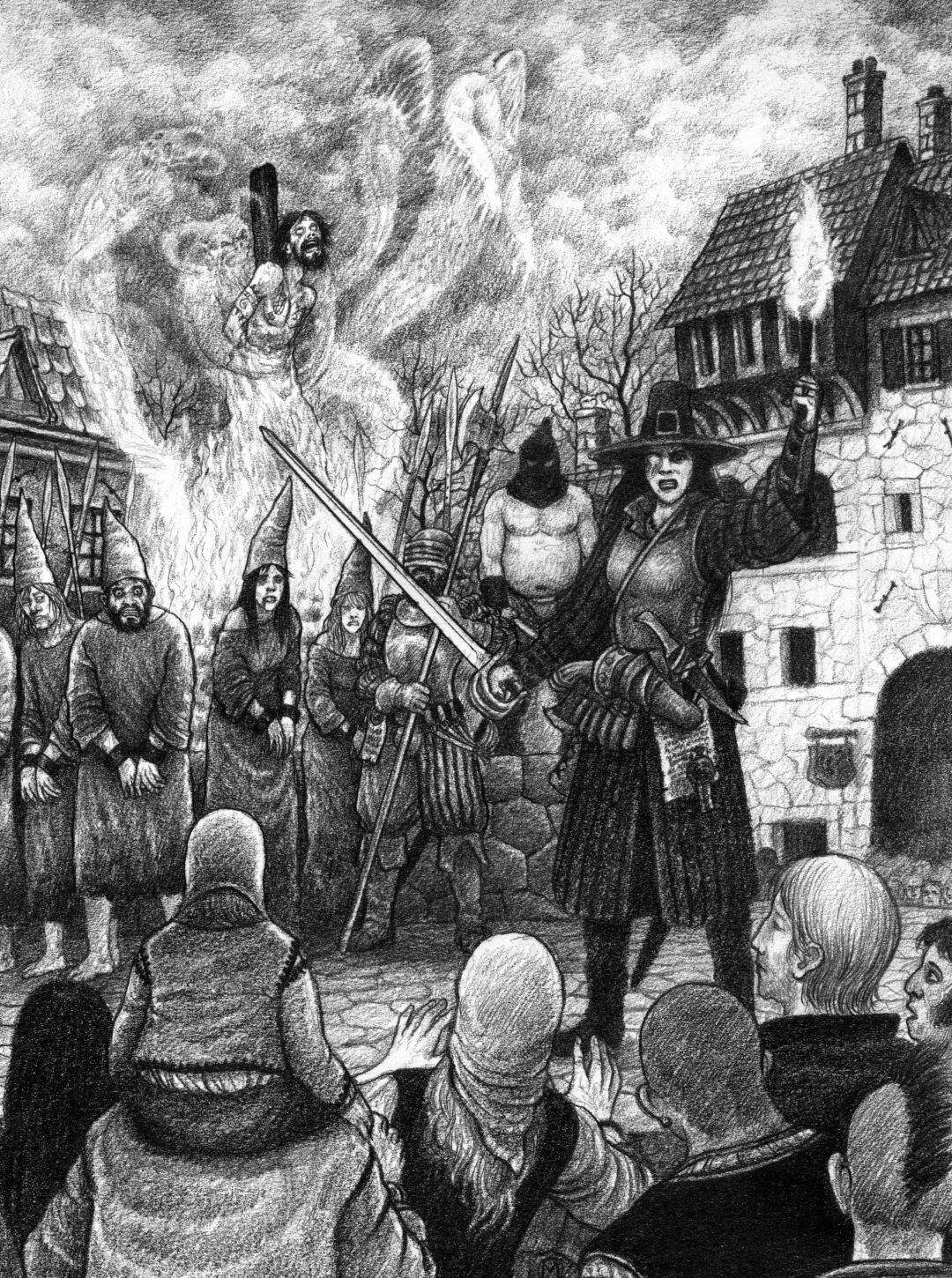 Zweihander isn’t really designed for the traditional dungeon romp that D&D players are accustomed to. While the game can support that style of play, death is almost guaranteed. Injuries sustained in grim & perilous games often have nasty consequences, requiring prolonged periods of recovery and care.

Common peasant rabble – when gathered into large enough groups – can drag a veteran knight off a steed and beat them to a bloody pulp. Combat is incredibly dangerous and rarely ends without lasting wounds. Monsters aren’t the most dangerous enemy in a grim & perilous world: people are. Most importantly, all of the violence, tough decision-making, and morally gray choices players make have a long-lasting impact on their character’s development.

If D&D plays like a fantasy adventure film, Zweihander is psychological horror, focusing on making players care about their choices and the aftermath of their actions.

Daniel D. Fox
Daniel D. Fox is the executive creative director of games at Andrews McMeel Universal. He was awarded two gold ENnies at Gen Con 2018 for Best Game and Product of the Year with his dark fantasy hit ZWEIHÄNDER Grim & Perilous RPG. After a 16 year career in digital advertising, Daniel now spends his days designing tabletop role-playing games and creating strategies to reach new RPG audiences. He enjoys good whiskey, Zweihänder RPG and Dungeons & Dragons (in no particular order). Daniel can be found on social media using the hashtags #ZweihanderRPG and #Roll20Spotlight. You can find his RPGs at Zweihander.Game and GrimAndPerilous.com

The Next Total War Saga Game May Be Set in Troy