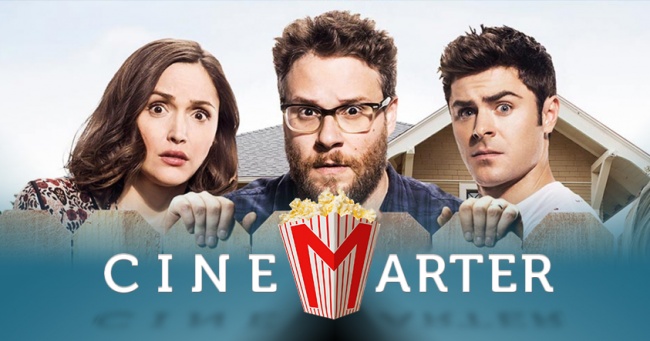 With rare – and I do mean truly rare – exceptions, comedy sequels find themselves inferior to the originals. They’re unable to recapture whatever it was that made the first film funny enough to warrant a second. Whether that’s because the filmmakers ran out of jokes, or we simply don’t find certain characters as funny in hours three and four as we did in hours one and two, the point remains that comedy sequels, almost all of the time, suffer from the law of diminishing returns. We get more of what we liked before, but it’s no longer as funny.

The latest to fall victim to this problem is Neighbors 2: Sorority Rising, a sequel to one of 2014’s biggest surprises. The first film is one that I like but don’t necessarily love, but it was funny enough that I watched it more than once, which is rare. It saw Seth Rogen and Rose Byrne star as Mac and Kelly Radner, a married couple who find themselves fighting with their next-door neighbors, a hard-partying fraternity led by Zac Efron‘s Teddy Sanders. The neighbor warfare was funny, the characters had great chemistry, and there was a bit of a heart underneath all of the mudslinging. It worked, it showcased the perfect way to use Zac Efron, and it probably should have ended there. 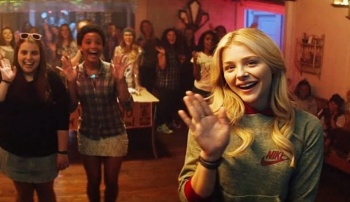 But Hollywood doesn’t work like that. When you have a movie that cost less than $20 million to produce, and it makes over 13x its budget at the box office, you try as hard as you can to continue profiting from it. In this case, the filmmakers swapped out a fraternity for a sorority, had Teddy switch sides, and repeated the same basic idea as the first film. “If it worked once, it’ll work twice” being the logic used.

The sorority is led by Shelby (Chloe Grace Moretz), who starts it after learning that on-campus sororities can’t throw parties – only fraternities can – and that the parties being thrown have a very sleazy vibe to them. So, alongside Beth (Kiersey Clemons) and Nora (Beanie Feldstein), she rents out the now-vacant house beside the Radners, and starts an independent sorority that’s free to party as much as it wants. That’s a problem for Mac and Kelly, since they’re currently trying to sell their house, and noisy neighbors don’t look attractive to prospective buyers.

Neighbors 2: Sorority Rising suffers from diminishing returns when it comes to the plot, comedy, and some of its characters.

So, yes, it’s a slightly convoluted way to establish the same scenario we saw play out just two years ago. The key difference is that this time, the villains are young women, which means that their reasons for acting are decidedly feminist – and that shapes where the movie goes, and how many of its jokes work. The girls want to fight against a sexist system that oppresses the freedoms of sororities. Neighbors 2, meanwhile, cuts out most of its “dudebro”-type jokes, and even makes sure to point out how the raunchy comedy still works, or why typical “bro” jokes are, well, wrong.

That Neighbors 2 is still as funny as it is while still making these points is downright miraculous. And while the plot is basically the same as the first, and some of the jokes are similar, it does earn points for being able to switch things up in this regard, and for being a successful raunchy “bro” comedy that is basically an anti-bro comedy. It has more thematic depth in that regard, and in seeing its characters grow – particularly when it comes to Teddy. It’s a pretty standard “you need to grow up” arc, but it works because this series has always had a big beating heart underneath the filth. His touching interactions with Mac and Kelly, and with some of his former frat brothers, are great.

Neighbors 2: Sorority Rising suffers from diminishing returns when it comes to the plot, comedy, and some of its characters. It’s not as out-and-out funny as its predecessor, and since that’s the most important thing when it comes to a comedy, it’s hard to say that Neighbors 2 is as good as the first one. With that said, though, the sorority angle allows it to go in some very impressive directions, and some of the character stuff – particularly with Zac Efron’s Teddy – works out wonderfully. It’s good enough to be worth watching, and that’s a success in and of itself.

Bottom Line: Not as funny as, but thematically deeper than, its predecessor, Neighbors 2 is perfectly fine, which in terms of comedy sequels means it’s comparatively great.

Recommendation: If you liked the first one, you’ll like the sequel.