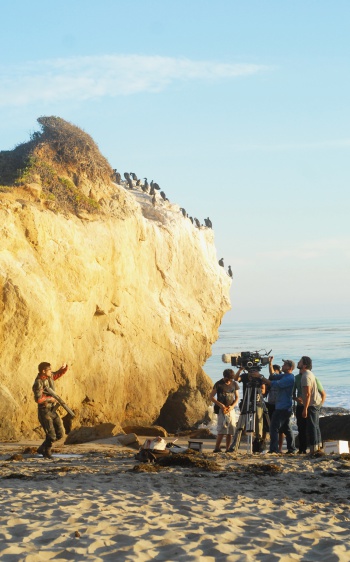 Go behind the scenes of POLIS in our interview with filmmakers Daniel Perea and Steven Ilous.

If you enjoyed the Prototype film POLIS, let’s take a look behind the scenes with filmmakers Daniel Perea and Steven Ilous. Ilous directed, while Perea wrote the script.

Q: Who worked with you on the project?
A: Over a hundred people and various companies worked on POLIS and we are honored to have worked with every single one of them.

Q: How did you pick out the cast and crew?
A: Most of the cast and crew were from established relationships, although we used the opportunity to work with new talent and some of our favorite artists. For example Electric Youth (DRIVE) and ROOM8 (V/H/S 3) signed on and created an original score for POLIS.

Q: Where did the story concept come from? Did anything in particular inspire this short?
Daniel: With POLIS, I really wanted to tell a science fiction story that wasn’t about invasive technology or malevolent machines. I wanted it to feel different. Psychics aren’t necessarily new territory in sci-fi, but it’s a realm that allows for very cerebral storytelling. I was drawn to developing a character whose abilities make him powerful, but vulnerable to the manipulation of others at the same time. That was fun.

Q: How long did it take to write? How long was the production overall?
Daniel & Steven: We went through several drafts of the script. The more we discussed the world of POLIS, the more we really honed in on what we wanted to say with the short. Writing and pre-production took a couple months. The actual shoot was the shortest part. Most of the heavy lifting happened in post-production, that was another couple months.

Q: Where did you film?
A: Los Angeles.

Q: Do you have a favorite scene?
Daniel: I love the scene where David makes the scientist turn the gun on himself, and then decides to spare him. It just says everything about David’s character. It’s what makes him the hero.

Q: Where did the tech concepts and vision come from?
Steven: The technical concepts came from a myriad of influences. The extrasensory perception and remote neural viewing (RNM) in the lab were evolved from Zener Symbol tests and theorized future use of electromagnetic technology. The overall vision was to explore how the human mind could possible evolve after the rise of artificial intelligence.

Q: What was it like to film and choreograph the action sequences?
Steven: The action sequences and robot performances were coordinated and choreographed by Garrett Warren (AVATAR, TIN-TIN) with on set coordinating by Lin Oeding (OBLIVION). The action sequences took an extensive amount of pre-production and on-set survey as most of our environments were fully CG. In addition to our environment challenges, we had to replace our drone stuntman Paul La Corvara in all of the choreographed fights with a full CG robot. The drones actions in the film were a combination of extracted performances from on set witness cameras and cg animation.

Daniel Perea (Writer)
Daniel Perea was born and raised in Gainesville, Florida, aka “Gator Nation.” From an early age, he began developing an enthusiastic love of the arts. He attended Jordan Glen Elementary and Middle school, where he gravitated instantly toward school plays. His love of theatre continued into high school, where he seized every opportunity provided by the International Baccalaureate Program at Eastside, as well as studying improvisation at the Hippodrome State Theatre. During the summers, Daniel attended workshops at the New York Film Academy, introducing him to the world of film, where he worked closely with directors and writers, and grew enamored with the work that goes on behind the camera.

In college, Daniel worked as a Teaching Assistant at NYFA, passing on his knowledge to high schoolers who were discovering their own love. In 2013, Daniel graduated from Emerson College with a Bachelor’s degree in Writing for Film and Television. He used his time at Emerson to fashion his very first screenplay, “Polis,” the science-fiction adventure that audiences will be introduced to early this year. He is extremely grateful for the opportunities given to him by Defy Media and New Regency, and for the dedication and investment of Steven Ilous, his partner on the project. Much love to the family, friends, and the people who are about to make this abstract vision into a spectacular reality.

His influences are the works of Christopher Nolan, David Chase, and Martin Scorsese, as well as the early science fiction films of Ridley Scott. As a child, Daniel fell in love with The Matrix, a film that introduced him to Cyberpunk philosophy and aesthetic. That and Star Wars began a lifelong love for the science-fiction genre.

The first seeds of the idea for POLIS germinated as Daniel was driving to Boston for his first year of college. Fittingly, the story evolved overtime as Daniel was exposed to the endless possibilities of his chosen craft, and it will continue to do so until the project is finally pried from his hands.

Steven Ilous (Director)
Steven Ilous is a writer and director from Los Angeles, California. In 2012, he completed a teaser for his sci-fi feature film which resulted in viral success and increasing popularity as an up-and-coming filmmaker.

With a diverse background in digital arts and computer technology, he has worked at Sony Imageworks and independently on over 16 feature films in various visual effects roles. Most notable is his work on both the Matrix Sequels and Robert Zemeckis’ “The Polar Express”. Since then he has directed various commercials, video game trailers, and music videos. In 2011, he created original video content for Kanye West’s live tour. As a writer, director Steven has worked with international recognized companies such as Warner Bros, Dreamworks and 20th Century Fox.

Steven currently resides in Los Angeles, California and is thankful to his friends and family, Matt Rosen at CAA and David Gardner at Principato Young for their continued support and everyone at DEFY MEDIA and New Regency for this opportunity.

Favorite Directors (in no particular order and too many too many to list but here’s three): Kubrick, Hitchcock, Ridley Scott