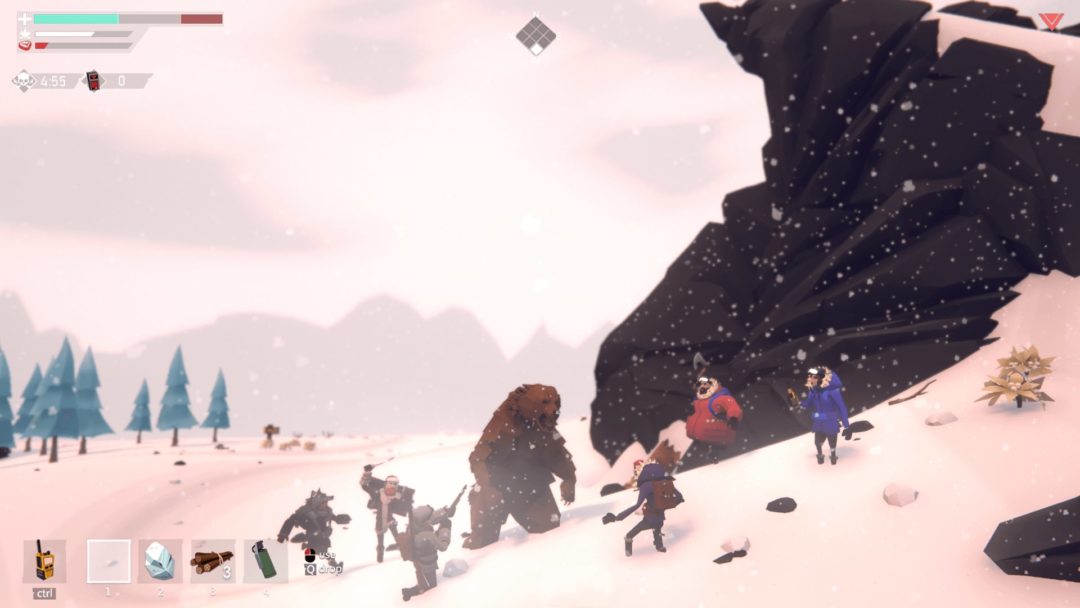 “I just like the idea of throwing a raw piece of meat in someone’s face to distract them long enough so that a bear can come and kill them.”

When developing Project Winter’s social deception loop, our main concern was figuring out how to extract, package, and sell the fun that comes from earning someone’s trust only to betray them in the most unexpected way, laughing maniacally while doing so. While Project Winter is similar to analog social-deduction games, we didn’t want to rely on the typical round- or turn-based systems seen in board games. Thankfully, our team is comprised of people who are not only talented, but also avid board game players themselves. It was this passion that allowed us to think outside of the conventional board game rules and create the dynamic, real-time system seen in Project Winter.

We came up with the idea of developing Project Winter using Rapid Iterative Prototyping, or RIP (pun fully intended). This means the development cycle relied on quickly implemented iterations from conception, in order to answer the riskiest questions we had about the game concept. If done correctly, rapid prototyping could get us on the right track for a fun game very quickly. In the realm of game design, developers have likely heard the phrase “fail fast and follow the fun” and that’s what rapid iteration is all about.

The goal of Project Winter was to create ample opportunity for organic player interactions that resulted in many unpredictable outcomes, so we dove in and set about working on what we perceived as the most basic systems to create “the fun.” Very quickly we had environment, warmth, hunger, and health stats, a few essential survival items, and a proximity voice chat system. At the end of each RIP cycle, the dev team would play the game together, and design would accumulate the feedback, analyze it, and adapt it for the next iteration.

In following that “fail fast and follow the fun” rule, we racked up LOTS of failures early. For instance, we discovered that automatically assigning a player a bonus objective at the start of the round actually ended up with said objective being completely ignored. Instead we gave players the choice to opt into the bonus objective and voila! Players began to complete more objectives in order to get a higher score. Give them the choice, and (most of the time) players will tell you where the most fun lives.

The entire gameplay flow was changed a number of times as well. Early in prototyping, all players would start as survivors vying for one of the limited seats on the escape vehicles. We used different colored radios that players could use to communicate privately so they could set up impromptu alliances. This seldom met in a clash. Why fight if survival is easily achieved when everyone cooperates? When creating a social deception loop, though, lack of conflict takes away the sense of danger that can make a player turn to the dark side on a dime. It wasn’t until later in the development cycle that we decided to shift towards asymmetry by introducing the “traitor” roles as a way to encourage people to stick together but still look out for wolves in sheep’s clothing among their own ranks, creating an organic sense of paranoia and unease.

Another early win found via our rapid iterative prototyping system was the wildlife AI. Our first wildlife implementation consisted of two bears, one that roamed the map randomly and one that “guarded” a bunker that contained goodies and parts necessary to fix one of the escape routes. For a single player, attempting to collect the loot meant waking up a very erratic AI bear only to meet a gruesome (albeit hilarious) demise. Whoever wanted the parts would instead call as many survivors as they could and would try to convince them to fight the bear together to increase their survival chances. Nine times out of 10, this approach would result in a few mauled players and a very dead bear, but on the rare occasion that the other bear would be close enough to spot the preoccupied players and sneak up on them there was a bloody, magical massacre.

Sowing the seeds of mistrust in a game is not a new concept, but it is a really hard one to implement efficiently, especially when decisions and consequences happen in real time. Looking back through our earliest feedback, though, it’s easy to see our biggest victories in between all the failures.

During a play session aimed towards gathering feedback on the implementation of firearms, our lead designer described a scene straight out of a thriller: “So I’m in the cabin, cooking wild berries and minding my own business when suddenly, four LOUD noises come from outside the cabin, quickly followed by frantic radio chatter and screams of ‘he’s out here shooting at everyone! SHOTS FIRED! SHOTS FIRED! HE–’, then sudden silence for a few seconds and finally an explosion of laughter from everyone in the development team. Accusations of betrayal are flying back and forth while most of the survivors laughed and admitted they never saw the betrayal come from the soft spoken art director in the corner.” You know you’re onto something good when people in your office can’t have business calls, focus on work, or try to have a decent conversation because most of the development team is busy yelling at each other over the game.

Making Project Winter a successful game relies on a single factor that is completely out of the dev team’s hands: human nature. We wanted to make storytelling and player narrative a unique and organic force that provoked players to talk about their experiences long after a session is over and keep them coming back for more. We’ve made the tools. Now it’s up to the players to decide how to use them.

So why is it that we find betrayal so entertaining? Is it the thrill of being caught in a lie, the adrenaline burst when you decide to finally turn the tables? Or the surprise and shock when your friend stabs you in the back? We’re still not entirely sure what the magic formula is, but it sure is fun to keep trying to find out.

Chris Navarro
Originally from Mexico City, Chris Navarro traveled far and wide all over North America, getting his start in the video game industry under the former LucasArts Company. In 2008, he relocated to Newfoundland, Canada where he has since worked as a game developer with Other Ocean Interactive.