Hey Mr. Cox, didn’t I see you being put in the back of a police cruiser outside the Spike Video Game Awards this year?
–eels05

Yes, I am afraid that YouTube video was, in fact, me. The Escapist sent me to the VGAs to cover the event but due to a simple misunderstanding between me and another journalist, I wound up outside the show partially blind and briefly incarcerated by the Los Angeles police department. But I am getting ahead of myself. Let me start from the beginning.

We were brought directly from the airport to the theatre. It soon became apparent that something was up when the van drove around back and dropped the t-shirt-wearing journalists and developers off at the service entrance. I guess my “Fuck This Awards Show t-shirt” didn’t fit their strict dress code. The benefit was that I was escorted to my seat early by a couple of ushers who were clearly nervous about being seen with me.

The events started with Zachary Quinto (the new Spock) announcing that he was going to be the tutorial voice for Star Trek Online. One could not help but think his dull monotone would be quite suitable for game tutorial; after all, he has built his career around being an emotionless automaton. Thankfully, my best friend – a silver flask filled with an alcohol of undetermined quality and origin which tasted suspiciously like brake fluid – was there to keep me entertained.

The show continued with Jack Black winning an award for Best Voice Acting in a Game Nobody Played for his role as Eddie Riggs in Brutal Legend. Black, always one to create an unnecessary spectacle came out in Wonder Woman wrestling tights, a cape and what appeared to be a Burger King crown. Perhaps he ran out of ideas, or someone forgot to tell him that Nacho Libre wasn’t really that good. He thanked his mom and then smashed the balsawood podium with his award. While the stage crew pretended to drag a mildly irate Black off the stage I took the opportunity to drink the mystery liquor in the flask. The warmth of the liquor dulled my senses and made the awkward sketch comedy seem nearly tolerable.

Unsurprisingly, Mountain Dew’s independent award, Best Game Fueled by Sugar Induced Diabetes, was Flower, a game actually fueled by Sony’s billions. For a second party developer with access to major corporate resources to win best independent game of the year would have been a slap in the face to truly independent game makers if any of them were actually seated where they could see the stage. Strangely my flask seemed to be telling me to drink; I obliged its wishes. 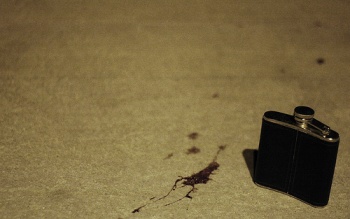 The flask was quickly becoming the only person in this hall that I could trust and was already nearly half-empty by the time I noticed the journalists seated in front of me yammering away. I am normally pretty patient, but the drink in my stomach was quickly becoming annoyed either at the guys in front of me, or a particularly unenthusiastic Snoop Dogg performance it was barely enduring.

As Jake Gyllenhaal (or Jake Jellyhall as we affectionately misspell his name around the office) handed out the award for Best Human to Megan Fox for her work in the poorly received game Transformers, the journalist who looked like Yanni kept making references to all the books written by obscure European authors he’d read and how each tome should be savored like a fine wine, not gulped. With that, I took a swig from the flask’s now meager reserve. The fiery draught in my belly told me to stop being a pussy and punch him in the back of the head.

The journalists continued to discuss Hugh Jackman’s role in the Wolverine game, saying how much he deserved to win against Vin Diesel and Bill Murray. Enough was enough. I leaned forward in my chair to tell him exactly what I thought of the crappy Wolverine game. After all Vin Diesel had done more to bring games to a broader audience than any other actor on the list, certainly more than Hugh Jackman, who couldn’t even show up to accept his award. My argument formed flawlessly in my mind: Vin Diesel wasn’t just another celebrity attaching his image to a franchise like Fox or Jackman. After all, this was a man who had not only been in two successful games this year but was also a gamer at heart.

This evocative discussion was cut short however due to a slight miscalculation in distance and my partial blindness, which I later attributed to my best friend. What began as a casual lean quickly turned into a full-on head butt right as he turned to see who was trying to get his attention.
Well, his attention was gotten. I swear, it wasn’t my intention to break his nose as some sort of homage to Vin Diesel. That is why, even as I was dragged from the venue by two rather unfriendly security guards, I had the presence of mind to yell back my well formulated argument about Vin Diesel’s contributions to gaming. Sadly it all came out, “HAHSSKDASDJASAJLDiesel!” which may or may not have to do with my friend, Brake Fluid, who was now in complete control of the situation.

As I was dragged from the theatre, I seem to remember a somewhat dismayed presenter announcing that New Super Mario Bros. Wii had won Best Game or something. This only served to anger my friend further. How could a game that had only been out two weeks win best anything! Luckily enough my escort had succeeded in tossing me out the front door before I could engage in any more spirited debates. 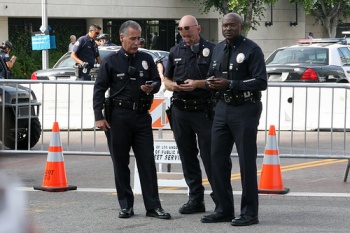 I sat on the curb, nowhere to go. I could have run but I had been partially paralyzed by whatever it was I had been drinking. The police cruiser arrived and an officer politely asked me to watch my head as he put me in the back of his car.

Even though my eyesight wasn’t that good I recognized a familiar face was there. I must have dozed off because the next thing I remember seeing was Ken Levine, the creator of BioShock, talking to the police and gesturing in the direction of the police car in which I was seated. I couldn’t guess at what they were talking about, but I saw Ken slip the officer something and they shook hands. The officer then unlocked the door and instructed Ken to take me back to my hotel.

Mystified, I waved happily to the LAPD as they drove off, perhaps the nicest police department in the world. Ken sat down beside me and offered me a drink from a brown paper sack and we watched Felicia Day get into a limo with Green Day and Mike Tyson. I accepted his offer and we sat there in silence until he asked if I wanted to go to the real after-party at his friend’s place in the Valley.

In the cab, he told me about his own experience with the VGAs. I wasn’t the only one to run “afowl” of douchebaggary at Spike’s award ceremony. He also laughed about headbutting journalists. He said there were a few he’d like to knock out as well; we made a list but I’m afraid that list is much too long to publish here.

We arrived at the after-party which turned out to be in a subbasement of his recently-unemployed friend’s apartment. The basement was filled with EA’s laid-off game designers and scruffy freelance journalists all gathered around the television watching the after-party for the VGAs at an upscale LA club. The scene on the TV bordered on sad, but I kept chuckling to myself as I watched Cliffy B. holding a Gears of War Lancer in one hand and a beer in the other all while Alyssa Milano tried to ignore his advances.

Someone suggested that we turn it off and have our own contest, but it was clear none of us were going to win an award for Best Dressed Gamer or have our pictures on posted celebrity blogs. That’s why we play games in the first place, right?

Later, an impromptu Street Fighter II (Turbo) tournament broke out and I lost about 40 dollars to the ex-president of Pandemic, Josh Resnick. I probably could have beaten him but I suspected he needed the money more than me.

All in all, I had a great time in LA, and so I would like to present my own awards. Obviously, Ken Levine wins The Hero Award for his role in making sure I didn’t spend the night in jail. And an honorable mention to whoever spiked my drink, which was probably me.

That’s what best friends are for.

Marion Cox apologizes to his editor for referring to the Video Game Awards as “The VAGs.” Repeatedly.