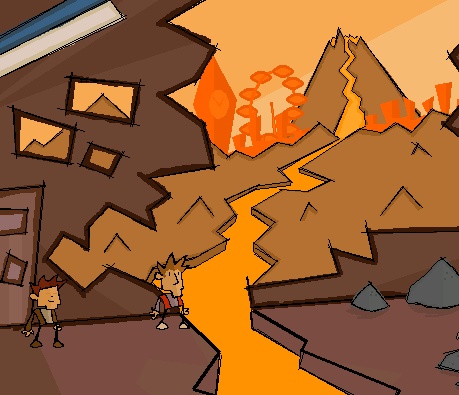 I first heard about Ben There, Dan That! in an article in PCGamer UK, where one of the game’s authors wrote an interesting article about its creation. I hadn’t bothered to try the game until I developed a taste for classic adventure gaming, thanks to MI-SE. During my searches for good free games, I stumbled upon Ben There, Dan That! from Zombie Cow Studios. Once I’d finished that, I immediately bought its sequel, Time Gentlemen, Please! If this were a just and righteous universe, you would all do the same.

Ben There, Dan That!, like the recent Tales of Monkey Island, opens at the tail-end of an adventure staring the two title characters, Ben and Dan. Tragically, Dan is dead, and Ben has finally made preparations for his resurrection. All that is left to do is to stick a firework up Dan’s bumhole and shoot him along an incredibly long piece of twine over a bottomless gorge and into a shack full of corpse-reanimating equipment. Simple, right?

Upon returning home, Ben and the freshly resurrected Dan settle in to watch Magnum PI. Or they would, had Ben not been forced to use the TV antenna in order to bring Dan back from the dead. A makeshift antenna is hastily made, bits of it poking out of an open window, which draws the attention of, naturally, an alien ship. The hapless pair are immediately zapped aboard the alien ship, which is full of doorways that lead to parallel universes. In order to return home, the two have to venture into these alternate worlds and find the two pieces of a yin-yang, which will allow them to open the door back to their own world.

Along the way, they’ll kill a priest, cause a mini-Death Star to fry a dinosaur, travel through the rear end of a cow and absorb a man with a sponge.

If any of this sounds offensive, this series is not for you. Which is a real shame, because it’s brilliant. The sheer amount of charm exuded by the pair more then compensates for any distasteful actions they, and by extension you, take. This may be one of the most offensive adult games you’ll have played, but it’s still absolutely hilarious, far more so then many other so-called ‘comedy’ titles released in the last few years.

One of the major factors crucial to the comedy is the writing. Having to get past a priest by killing him may seem cruel, even borderline offensive. Doing so by whacking him over the head with his own bible, and then expressing a forlorn hope that he’s just sleeping takes a lot of balls. Thankfully, the writers manage it with aplomb, and that’s not even the worst they throw at us. The darkest side of humor is evident throughout the game, but because everything is played for laughs, it’s actually surprisingly difficult to become offended by Ben and Dan.

The blank expressions and dry comments offered from the two leads are oddly endearing, and it’s hard to hate such a lovable pair of scamps, even if they do have a tendency to swear a tad too often. You’ll find that Ben and Dan’s oddly distinct yet basic animations make them difficult to hate, even as they inadvertently kill someone via the gift of toilet cakes. 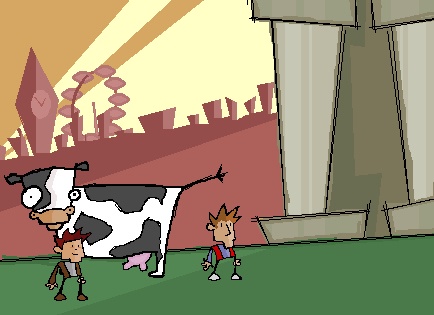 The environments of the game are the real stars of the show. While traveling through the parallel universes, Dan and Ben experience several different versions of the London skyline, all lovingly rendered with jaded angles and straight lines. It’s a wonderful throwback to classic LucasArts games, without being generic.

I mention LucasArts adventures for a reason. One of the highlights of those games were the puzzles, something Ben There, Dan That! mimics relatively well. The tried-and-true method of ‘pick up everything not bolted down and combine it all with everything else’ will showcase just how much forethought has gone into the game. Nearly every possible combination of items has a custom snarky response.

Trying to use a crowbar with a dinosaur, for example, will warrant a ‘I’m not Gordon Freeman!’ comment, while trying it on a PC will issue a concern that it will crash the computer. Unfortunately, while these responses are funny, they don’t dole any hints or tips to the player. It can be difficult to get into the exact frame of mind the designers had while making the game, but once you do stumble upon the perfect combination of items, it will make a wondrous kind of sense.

The only thing lacking from Ben There, Dan That! is the music, mostly because it’s missing from the game. Though the theme tune is certainly funky, it’s also the only piece of music you’ll hear throughout the entire game, aside from the lift music that crops up in a horrifically long elevator sequence. Background ambiance emerges in certain places, such as the quiet tapping of keyboards in a software development office or blurred-out commentary of the big game in a pub, and you’ll get a little musical flourish whenever you unlock a new universe to explore, but that’s about as sophisticated as the score gets.

However, these minor issues can’t detract from what is, at heart, a thoroughly enjoyable slice of retro gaming. The adult humor ensures that it doesn’t feel like a cookie-cutter clone of other games, and the high level of polish makes you feel like it’s 1995 all over again. Factor in the fact that it’s free, and you’ve got an excellent way to spend a weekend.

Recommendation: There’s a few minor issues, but overall Ben There, Dan That! is a very entertaining game, and if you’re at all interested in adventures (and either don’t mind or revel in adult humor), then you’ll have hours of fun with it.

Bottom Line: It’s free, so what are you waiting for? Go download it already.