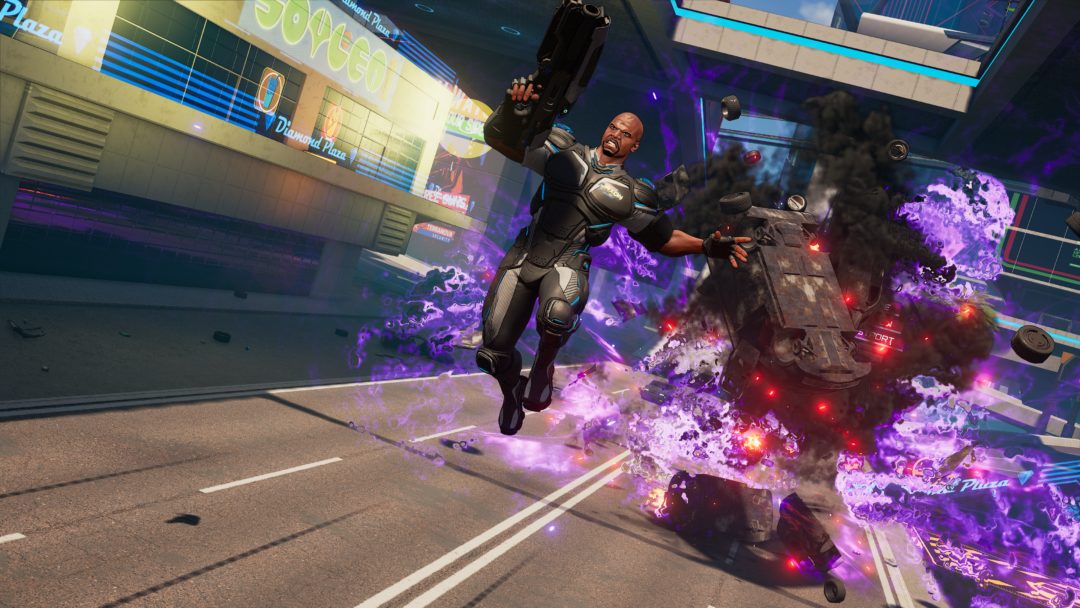 Crackdown 3 promises delicious chaos, aspiring to be a blissful marriage of mayhem and absurdist comedy. The original Crackdown and Crackdown 2 mixed laughs and super cop action in volatile abundance, but after six years in gestation and myriad delays, Crackdown 3 needed to be the same but more. It needed more fun, bigger explosions; it needed to be as big as its faceman Terry Crews. Unfortunately, Crackdown 3 is just hit or miss.

The story is so irrelevant to the overall experience that it sours the game. While not every game has to have a God of War caliber of a script, a good story with a strong thematic undercurrent can enhance even the most rote game action.. Making matters worse is that Crackdown 3 mishandles a killer premise: it’s Antifa teaming up with a trigger happy police state to take down a corporate oligarchy! Crackdown 3 wastes a golden opportunity to explore this story dynamic in a meaningful way that allows the player and the character to contemplate the nature of The Agency as a world policing organization.

Speaking of wasted opportunity, Crews is criminally underutilized. Aside from an opening cutscene where he screams: “Quack! Quack! Motherf****rs!” he’s noticeably absent and the game really could have used his charisma to help the story complement the explosive gameplay. While his absence is understandable due to how the Agent in your control control can be a different sex and race, the lack of Crews is still disheartening and means that the burden of quoting Old Spice commercials is on the player alone.

Crackdown 3’s action at least lives up to its pedigree. While the first couple hours are inoffensively average due to sluggish pacing that renders the action indistinguishable from run of the mill open world games, the game becomes riotous once you start accruing weapons and collecting the ever-so-addicting orbs to enhance your various abilities such as agility, strength, firearms, explosives, and driving.

Making matters worse is that Crackdown 3 mishandles a killer premise: it’s Antifa teaming up with a trigger happy police state to take down a corporate oligarchy!

Crackdown 3 becomes even more of a blast once you unlock things like a bolt machine gun that fires incendiary rounds, various explosives, and added maneuverability like a mid air dash. The game has a frantic feel as you jump and move across the world while cars, fuel tanks, and a diverse list of enemy types combust around you like an urbanized Mad Max. I was chortling every time I spammed grenades at dozens of hapless enemies and vehicles pursuing me all while Agency leader Goodwin shouted blood lustful color commentary.

It can be downright hysterical as well as gorgeous. Diverse and lush locations on the map give New Providence a distinct character such as the mountainous quarry, a small floating village near the docks, or the glamour of the high end districts. While some may lament that the graphics aren’t realistic, the cell shaded style in Crackdown 3 adds to the frantic and comical tone as explosions and neon lit city signage contrast with each other forming a painterly sight.

For all its fun, though, Crackdown 3’s action is imperfect. Most notably, the rewards from leveling up are downright forgettable. Growing your character can be fun , but many skills and gadgets just aren’t useful. The gravity tether was useless for my play style, and I was desperate for something like a sprint upgrade, something the game didn’t have at all.

Crackdown 3’s story shortcomings extend to Wrecking Zone, the game’s multiplayer mode. Wrecking Zone may seem ambitious with its crumbling destructible cityscapes rendered by Microsoft’s Azure Cloud, but it currently only features team deathmatch and a mode where you have to hold a piece of territory, the sort of basic distractions that would have been in a launch game on PlayStation 2 decades ago. Most galling of all: you can’t play with friends in a party, relegating online friends to the co-op campaign. Wrecking Zone is conceptually interesting but lacks staying power.

I did enjoy the mess that is Crackdown 3. In chunks, it can be exciting, but the story, multiplayer, and milquetoast character progression inhibit its potential. The promised mayhem is here. But it isn’t more.