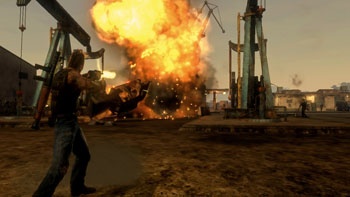 I used to say the only game I ever needed (had I to choose only one) would be Mercenaries. It’s not Tom Clancy. It’s not about imagining you’re really there. It’s about tearing through North Korea in a tank, blowing up statues of Kim Jong Il. It’s stress relief in digital form. My biggest problem with the game was that it was originally released for the original Xbox, and it took Microsoft’s compatibility engineers forever and a day to work out the kinks getting it onto the Xbox 360, and even afterward it still didn’t play right. Now the sequel has arrived, and my new “the only game I ever need” is Mercenaries 2.

If Mercenaries is like GTA, but with air strikes, then Mercenaries 2 is like Mercenaries, but perfected. The graphics – as should be expected with the jump from last gen to this gen – are phenomenal, the load times are reduced, the missions are more varied, the vehicles are more interesting, there are more of them and you can buy them sooner, and the weapons are more intuitive and more satisfyingly explosive.

The sequel takes place in Veneuzuela, where, apparently, some kind of coup has taken place and the newly unfriendly locals are trying to run out the Texan oil men, who are fighting back, while simultaneously fending off guerilla attacks by the local rebels, who also hate the local nationals. Rounding out the sextet are the Rastafarian pirates, the Chinese army and the United Nations analog. But, as with the original, it doesn’t really matter who hates who, or what they all really want. All that matters is that they have money to pay you for blowing stuff up. As Swedish mercenary Mattias says, “It’s better to get paid for what you would do anyway.” Absolutely goddamn right.

To buy weapons to blow stuff up, you need money, and you make money by doing missions. You can also find it lying around on the ground, so there’s no real trick there. You also need fuel to operate your aircraft when you call in airstrikes or order new equipment. But that, too, you can find lying around. All you have to do is steal it. It’s as if the Mercenaries crew liked the idea of a resource-based strategy game, but got bored with the details. Which suits me just fine, because I have that exact same reaction.

To advance in the game, you do missions for the various factions, but since each faction is at war with at least one of the others, it’s impossible to advance in the game without pissing somebody off, which, if the game were an RTS, would introduce a speed bump, but even this trap has been avoided. If a faction gets too angry with you, you can just pay them off.

But none of this is new; it’s all been carried over form the original, just polished to a next-gen sheen. Pretty much everything I disliked about the original (and there wasn’t much) has been updated for the better. It’s as if Pandemic knew it had a hit formula, it just wanted to update it. Mission accomplished. In fact, the only thing I don’t like about the game is something new. 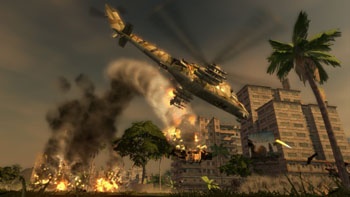 One of the gimmicks of the original was that you could steal every vehicle in the game. If you could see it, you could hijack it, you just had to get close enough. Ironically, in a game that reveled in making running around a war-torn country carrying enough firepower to level entire city blocks look easy, someone thought the vehicle stealing mechanic was too easy. If I ever meet that person, I intend to slap him.

In the sequel, thanks to Mr. Soon-to-be-slapped, you can still steal any vehicle you can see, but now you have jump through a Quick Time Event button-mashing hoop first. Somewhere within the corporate bowels of EA, somebody is sitting with their feet up on their polished desk, smiling at themselves over their clever attempt to plant their greasy thumbprint on an otherwise perfect game. Congratulations, hero. You helped design a game. Now get back in the HR department where you belong.

Aside from that minor, nonsensical annoyance, there’s a lot to love about Mercenaries 2, but first and foremost, you have to admire its simplicity. It’s a game about blowing stuff up. Period. You don’t need to know why there are Jamaican pirates in Venezuela. You don’t. All you need to know is they have the best helicopters, and their boats are painted bright yellow.

You don’t have to spend a lot of time figuring out the best route of attack through the buildings down to the beach where the enemy soldiers are hiding out. Just drive a tank through the buildings and run them over. Or call down an air strike to flatten the entire block. Or sneak around with an RPG and ignite the nearby oil tank to achieve the same effect. Or hover overhead in a helicopter … it doesn’t matter.

Bottom Line: In a game where everything is destructible and you can buy practically any weapon you can imagine, up to and including the venerable “Daisy Cutter” bomb, and the money to buy those weapons is literally lying around in piles, all you need to know is one thing “where they are.” That’s right, Vasquez. Any time, anywhere. All that’s missing is an option to nuke the site from orbit, but there are a few shops I haven’t unlocked yet, so it may still be there.

Recommendation: If you like to make things go “boom” and a don’t find a dearth of talky-talky offensive, you could do worse than buy this game. The original lived in my Xbox until I bought a 360, and I kept the Xbox hooked up long afterward just to play this game. So far, I haven’t seen any reason to believe the sequel won’t have the same long shelf life.

Russ Pitts has been waiting his whole life to use the line “I’m here to kick ass and chew bubblegum.” But, as yet, the moment has not come.