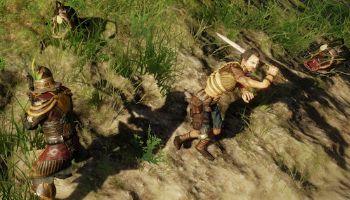 The Risen series is just plain weird. Ultimately, it’s a selection of roleplaying games that manage to be a laugh while also being not very good at all. From a purely objective standpoint, they’re embarrassingly written, terribly balanced, and often quite alienating. Yet, for some reason, I find them enjoyable all the same. Risen 2: Dark Waters was something I had an especial fondness for. It was a total mess, and its attempts at humor were regularly offensive, yet there was something charming about how utterly charmless it was, and something fulfilling in its unintuative and punishingly stodgy combat system.

If Piranha Bytes is good at one thing, it’s in balancing just the right amount of trash in a way that somehow provides a damn fun time.

At least, I could say such a thing until Risen 3: Titan Lords reared its head. See, the secret magic to the Risen series is that, despite how “bad” the games objectively are, there’s always this sense of genuine heart behind it, this herculean effort to make a largely pleasant experience despite the mountains of criticism one might have of it. I’ve greatly enjoyed previous Risen adventures because they had fun with themselves, an infectious fun that rubbed off on me in all the right ways. It’s this sense of effort, heart, and fun that is sorely missing from Titan Lords, and their disappearance simply betrays how bad Piranha Bytes’ games are at their core.

First of all, it’s impossible not to notice how much of the game is recycled from Risen 2. We’re talking characters, monsters, and entire environments, to the point where one wonders if this is simply just a glorified expansion. Progression, loot, dialogue choices, NPCs, so much material has been lifted from Dark Waters and tossed into Titan Lords with shameless abandon.

The developer claims it’s completely revamped the combat, but I simply cannot see it. The “new animations” are certainly not an improvement, as I found when my protagonist constantly tried to sheathe his weapon and land a hit at the same time, swinging awkwardly at thin air with nothing in his hands. Whatever “nuance” Piranha Bytes insists has been thrown in, nothing new translates to the player. Despite the return of magical attacks to the game, nothing here feels fresh in the slightest. It’s all slightly tweaked – at best – presentation of stuff we saw two years ago … stuff that was, itself, pretty friggin’ dated back then!

I don’t use the term “glorified expansion” lightly when talking about sequels, because I find the accusation gets tossed around a little too freely, but the amount of recycling found in the game is shocking, to say the least.

It looks, feels, and sounds exactly like its predecessor, and when you consider just how much about the predecessor needed fixing – from screwy combat targeting, to graphical glitches, to poor game balancing – there’s really no suitable excuse. Absolutely nothing that needed fixing in Dark Waters has been fixed here. It’s like they took the exact same game and draped a new story over it.

There’s plenty of that, at least. I can’t say Titan Lords skimped on the dialogue or quests, and if the nebulous concept of “content” gets you off, then there’s absolutely loads of this “content” for you to enjoy. Unfortunately, the sheer volume of quests and subquests is, itself, a major problem. Just trying to work out which quests are part of the story is difficult, due to the amount of them you receive at once, and how the log book screen piles them all on top of each other, some with incredibly vague descriptions of what you’re actually supposed to bloody do.

Of course, it’s also a pain in the arse to get around the world of Risen, with inconveniently placed fast travel locations, and the need to go from island to island via a separate fast travel system, so accumulating a bunch of world-spanning tasks is a nightmare. 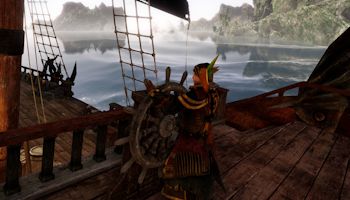 Quests often splinter, leading into multiple smaller quests which themselves may splinter further. After ten hours with the game, I had a log book filled with dozens of missions spread across multiple islands, and I had no clue what to do first. Some quests require you to complete other quests before they can be completed, but good luck finding out what the order is supposed to be! I realize I’m using the word quest a damn lot, but if that frustrates you, you’ll get a good idea of what trying to make sense of Risen 3 is actually like. Some of the missions cannot be completed until set points in the game, but the game itself won’t tell you that, and you may end up wondering what the hell you’re supposed to do as you pursue a dead line of inquiry. Other times, you’ll simply have quest marks on your map point to the wrong place, and you’ll wander around an environment trying to work out where to go, only to read and reread the log book until you guess a different, unmarked location.

Did you know that Deep Silver actually provided a full walkthrough of this game, from beginning to end, to reviewers? That’s how dense with impregnable “content” this release is. That’s how sure the publisher was that you couldn’t simply play through this game without getting lost and confused. I usually try and ignore all additional material provided by publishers in order to provide an honest, untarnished opinion. However, I will admit right now, the only way I could grab one of the writhing strands of this game and start pulling myself along the correct route was thanks to that guide. The game itself sure as shit wasn’t going to point me in the correct direction.

Games that throw a whole ton of missions at you can be enjoyable, but the way Risen 3 does it is messy, haphazard, and actively breaks the flow of the game. After ten hours of play, I felt like I hadn’t accomplished a thing, and when I finally did grab a strand of the actual story, the main quest-line threw so many distractions and mandatory sub-missions at me that I felt exasperated and exhausted by the whole ordeal. Risen 3 is a game tha refuses, for hours and hours and hours, to get to the fucking point of anything.

Risen 3 overcompensates on “content” for the sake of it, because of how little about the game is actually new. While gamers these days want to play titles that last them for days, and the running time of a new release is hotly desired information, one must wonder if it’s worth getting excited over a hundred hours of gameplay if almost every single hour consists of dawdling, time wasting, and treading water – all in a world that’s largely been seen before.

Is the game universally terrible? No. It still claws together a modicum of that European RPG character that made the first two games in the series so interesting, and its pirate flavor is something you just don’t see in roleplaying games too often. Getting over the series’ trademark difficulty hump and finding your mojo in combat is still quite satisfying, while that gormless Risen “humor” can be delightful in a cringe-inducing way.

Sea-based battles can also be quite enjoyable, as you steer your ship across the waters to take out sea monsters or other vessels. In true Risen 3 style, however, these sequences drag on for too long, and start to slip into repetition long before they conclude. I’m surprised, given this series’ predilections, that ship combat works so well without being a total shambles, however. It’s actually better than any of the other fighting.

Still, those moments of enjoyment just aren’t worth slogging through hours of uninspired missions that have been strung together in as anarchic and user-unfriendly a manner as possible. Risen 3 just isn’t worth the effort you have to put in, especially when effort seems so sorely lacking on the developer end. It doesn’t look like they cared, so why should we?

There’s nothing wrong with “more of the same” if what you’re providing more of is genuinely excellent stuff. With a game as archaic as this, a game that needs so much fixed, there’s simply no excuse to just rehash stuff and toss it back out there. Reusing assets, bringing back old gameplay mechanics, there’s nothing inherently wrong with all that, but when your last games just barely managed to be acceptable through dint of uniqueness and surprising charm, retreading old ground is the absolute worst thing you can do.

Don’t worry though, the preorder bonuses included a new island and new equipment – things you’ll find yourself in dire need of if you just buy the game at launch. Nice to know where the priorities are!

Bottom Line: Bloated in the mission department, threadbare everywhere else, Risen 3: Titan Lords is cobbled together from rehashed material, and the series’ many flaws are enhanced a hundredfold in the process.

Recommendation: Dark Waters had more piracy and at least tried. It should also be cheap as grog right now, so go check that one out.