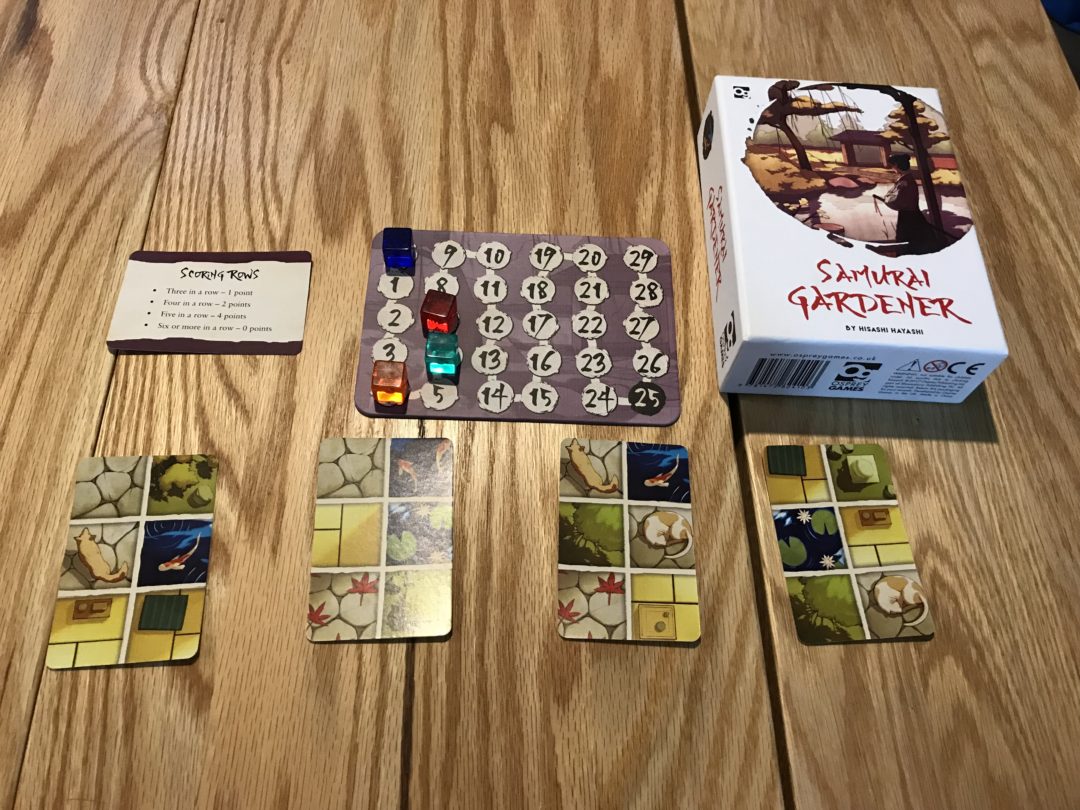 I did my friends a favor and took off my rings before we started playing Samurai Gardener. As the dealer laid out four of the detailed cards in the center of the table, we stared at them trying to quickly ascertain which were good. We eyed each other suspiciously and then turned back to the dealer. “Ei! Ei!” he shouted. “Oh!” we echoed. Then the slapping began.

Developed by Japanese board game designer Hisashi Hayashi and published by Osprey Games, Samurai Gardener bears the groan-inducing subtitle of “The Game of Bush-Edo.” Players take on the roles of samurai who must defend the honor of their highly competitive lords not on the battlefield but by demonstrating their superior landscaping skills. This is done through building harmonious gardens that integrate plants, tatami mats, paths, and ponds, with your score based on connecting complementary elements.

The slapping is a form of card drafting, with players claiming whichever card they hit first. If multiple people slap at the same time, you can settle the dispute based on who is covering the card the most. We never actually had to do that as the answer was usually so clear cut the loser would just grab for another card. I was a childhood Egyptian Ratscrew champion and expected my speed to be an advantage in this phase, but it’s a lot easier for your brain to instantly recognize you need to slap doubles than it is to properly assess how a card with six little icons on it is going to fit into the structure you’ve already got built. Cards that already have two of the same garden features in a row are typically worth grabbing, but multiple times I didn’t realize until I started playing with positioning that my first-pick card was far from optimal.

Not that I could be sure that anything else in the center at the time would have been better considering how often my friends also seemed to have the exact same struggle. The speed element of the game moves things along, keeping Samurai Gardener to its estimated 15- to 20-minute playtime. Considering you barely have enough time to assess your own needs, hate drafting is nigh impossible. If you wanted a less violent version of the game, a tea timer would work just as well.

The really tricky part of the game comes from scoring. Ticket to Ride, Oceanos, and plenty of other Eurogames reward players for building the longest line of a certain element, but Samurai Gardener caps its line length at five in a row. Once you have five pond or path pieces in a line, the sixth one would be worthless. Instead you need to start focusing on another area of your garden. You also can’t score any one element a second time until you’ve achieved at least three pieces in a row for all four of the game’s elements, which is represented by a set of cards for each element that are flipped over as you score. While a five in a row scores four times as many points as a three in a row, it’s often better to prioritize making multiple short connections at once so you can get closer to resetting your cards.

That’s easier said than done considering the tight restrictions on card placement. They must be positioned vertically, and can’t overlap any element that has previously been scored. That means that producing a short row for convenience can come back to bite you later. After the speed of the drafting process, everything slowed down as the table seemed to collectively groan at the prospect of how to make  serviceable arrangements that boosted our score. Luckily the cards are fun to look at, decorated with pictures of koi, lily pads and cats curled up sunning themselves on your otherwise perfectly manicured paths. The other big challenge is finding a table with enough room to play. We perpetually needed to reposition our growing gardens to keep them together without encroaching into another player’s space.

The fiddly scoring system means it’s near impossible to run away with the lead and our points were extremely close at the end of the game. That’s a sign of good game design. So is the fact that we only got frustrated with our own shortsightedness and no feelings were hurt. I can’t say as much for the backs of anybody’s hands.