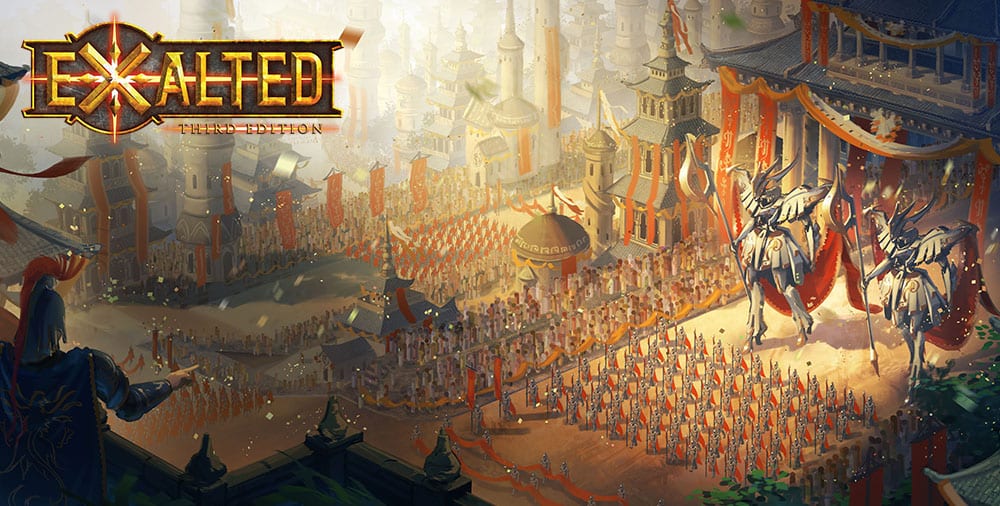 Yesterday a group of five demigods threw a party. In many ways it was a typical bash, an old-fashioned neighborhood mixer, giving everyone the chance to get to know each other over plenty of food, games, and recreational drugs. But it was also an exercise in leadership for the five Chosen of the Unconquered Sun, who throughout the planning and actual celebration kept receiving flashes of memories from another life in which they were the undisputed rulers of the world.

Welcome to Exalted, a tabletop roleplaying game originally produced by White Wolf Publishing but now released by Onyx Path Publishing. The rich setting combines elements of fantasy anime, Greek epics, and Chinese mythology. At the dawn of time there was only unshaped chaos, and then the Primordials gave form to the world and sent their children, the gods, to manage their affairs. But the gods coveted their power and the greatest among them, deities of the sun, moon and stars, bestowed some of their strength on mortals who would be their champions. The Primordials were defeated, some killed and some banished, and the Celestial Exalted presided over an age of peace, prosperity and wonder. But it didn’t last. Unbeknownst to the gods, the Primordials had cursed their chosen so that as their power grew, so did their corruption. That led to a devastating war where the Exalted fought each other and the divine essence of the Solars was captured so that their power could never be given to another mortal.

That was 1,000 years ago. Now the world is a fallen place. Without Creation’s greatest champions to fight them, old threats have gotten bold, and new ones have emerged. The Fair Folk feed on human souls and seek to return the world to chaos. Corrupt gods and powerful demons demand fealty of the weak and grant their favored immense power. The Deathlords command armies of hungry ghosts and far more terrible threats in their quest to extinguish all life. The Lunar, Sidereal and Terrestrial Exalted are locked in internecine conflict. But there is new hope. The Solar Exalted have returned.

The party was part of an Exalted Third Edition game I began playing last year. We’re a group of Solars traveling together and trying to solve problems so challenging they test the limits of our great power. We’ve had to infiltrate a city ruled by sorcerers to help victims of an artificially created plague and learn how to defeat an immense demon. We’re trying to build a civilization that can continue to thrive when we go off to treat with a court of plant gods and look for materials needed to make weapons and armor that no mortal would be able to wield. Solars are divided into five Castes each with a different role, which translate roughly as Warrior, Priest, Scholar, Spy and Diplomat. Those roles provide an excellent in-game reason for each of us to have a different focus for our characters, reducing overlap and ensuring we can do pretty much anything when we’re all working together.

I’ve been playing Exalted since First Edition and I think it’s one of the coolest settings around. Because your characters are built not only to fight but to rule, the game demands a strong mix of roleplaying and combat. Some of my favorite sessions have involved trying to earn the favor of a god by telling a beautiful story or negotiating with soldiers whose religion says that Solar Exalted are demons in order to persuade them to join us and fight some actual demons. On the other hand, conflicts are designed to be cinematic and ridiculous. You get to roll extra “stunt dice” if you describe what your character is doing in a particularly cool fashion, which isn’t hard to do given that Solars have abilities that can let them balance on the tips of tree branches, chuck boulders, and cut through enemies with impossibly large swords glowing with the holy light of the sun.

The complicated lore and dense rules can make it a particularly difficult game to play and run. Beginners often get away with playing characters who aren’t particularly educated and specialize in just one or two things, letting veterans play scholarly characters that  expound on about the Celestial Bureaucracy and various circles of demons.

Every edition has had some significant flaws. Attacks were so devastating in the first two editions that players often had to prioritize defense over everything else if they wanted to survive. Third Edition has fixed that, but now combat can be frustratingly slow. Some abilities cost more at character creation than they do when leveling up with experience points later, meaning you can wind up permanently behind if you don’t build well at the beginning. It can also be extremely difficult to design challenges that will satisfy the player who’s put most of their XP into swordfighting and the one who’s focused on sneaking around and investigating crime scenes.

But with the right storyteller and group of players it can be an extremely satisfying experience. Exalted lets you combine the thrill of building a civilization with the more immediate excitement of stylish fight scenes, and it peppers in moral dilemmas like whether you can avoid the mistakes that previously brought about the Solars’ doom. I’m looking forward to more of all of that ahead as my friends and I continue to work to improve Creation and spread the glorious light of the Unconquered Sun.