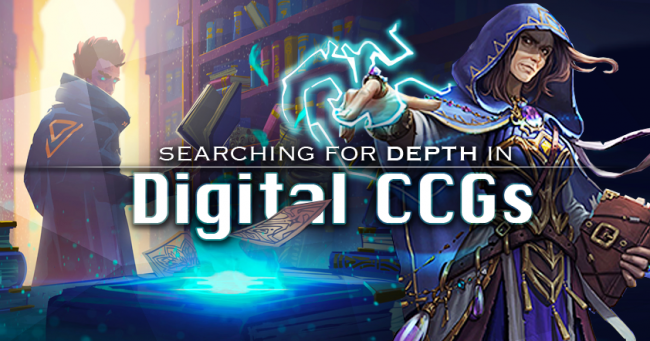 Before we get started, I just want to take a moment to make clear that I absolutely adore Hearthstone. I still play almost every day, and I think it’s playing a huge role in driving interest in CCGs, both digital and paper. One of the big reasons Hearthstone‘s success helps other games is its simplicity. Blizzard games are almost always focused on accessibility, and Hearthstone is one of its greatest successes. CCGs and TCGs have never been a particularly welcoming genre, with so many cards and mechanics to learn, plus the process of deck building and meta-gaming, that it can be one of the more daunting hobbies to get into. Hearthstone made it easy enough for millions to join in, and now some of them want something deeper, and to that end, I’ve got a couple of stellar examples of digital CCGs that are pushing depth of strategy hard, while maintaining at least a bit of the accessibility that simpler fare has to offer. Namely, Duelyst and Eternal.

It’s probably fair to assume that you’re familiar with Hearthstone and Magic: The Gathering at least at a basic level, so I’ll be using those to offer a basis of comparison. You may not be so familiar with Duelyst or Eternal, though, so I’ll touch on the games a bit before I get into the side-by-sides. 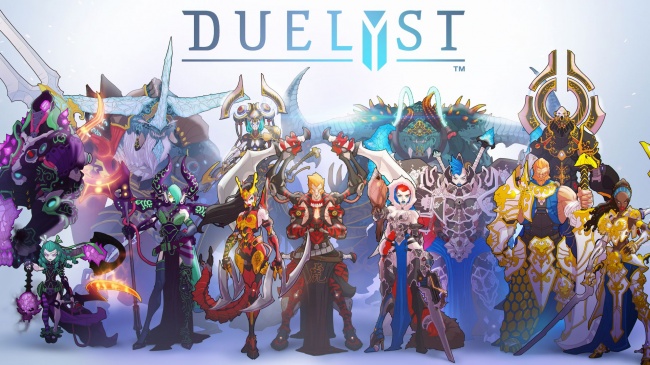 We’ve covered Duelyst before here, and it came with a strong recommendation. I’ve been playing here and there since then, and got into it a bit more with the new expansion, Denizens of Shim’zar. What sets Duelyst apart from the rest more than anything else is its tactical combat gameplay, but as new cards are introduced, like with the recent expansion, the experience is even more dynamic as the metagame shifts to accommodate new, powerful mechanics. Most recently, for example, the Denizens expansion introduced Battle Pets, a new creature type that acts independently, according to some basic rules.

Beyond everything else, I think Counterplay deserves to be lauded for its commitment to the community’s competitive scene. The company pledged to set aside 10% of all expansion pre-order proceeds for prize pools in the World Championship Circuit. I don’t know what pre-order sales were, so I have no idea whether that’s a substantial amount of money, but it’s a strong gesture and valuable show of faith to the players. 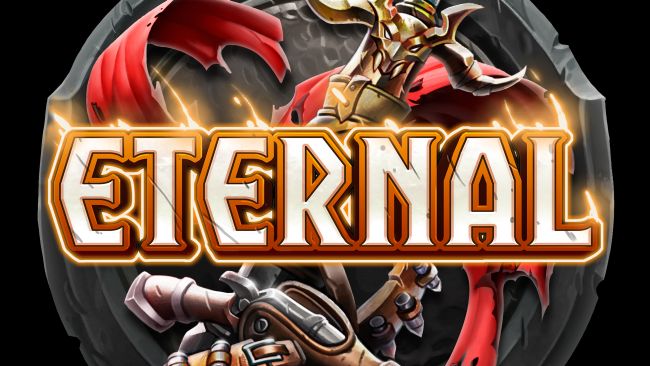 Eternal is a bit newer, and I hadn’t heard anything about it until PAX last month. The development company, Dire Wolf Digital, has been flying largely under the radar until recently, but that’s already started to change. It’s very likely you’ve played – or at least heard of – a game created by former Magic: The Gathering pro players, like the WoW trading-card game, or the deck-building games, Ascension and Star Realms. Now, Eternal‘s design team is sporting the largest collection of Magic pros I’ve seen since I spectated a Pro Tour, with Conley Woods, LSV, and Patrick Chapin, just to name a few. It’s a remarkable collection of brilliant minds, and it shows clearly in not just how the game plays, but the very core of what it seems to be aiming for; the rich depth and complexity of Magic coupled with the wide accessibility of the digital CCG, which brought in a new set of mechanics that would be near impossible to accomplish in a physical game.

Eternal plays much more like Magic than Hearthstone, with your mana resource, Sigils being at the mercy of random draws, though the digital medium offers ways to minimize resource problems. It doesn’t segregate the different colors/factions/classes, so you’d be able to, for example, mix Paladin and Priest class cards together. You can’t attack minions directly with your own, instead the opponent has to choose to block. It still has a lot in common with Hearthstone, just like Hearthstone had a lot in common with Magic. It’s like running something through a language translator, then back to the original. You can see the foundation, but every detail is different somehow.

Eternal is true full Free-to-Play, with everything in the game being unlockable with no paywall, though the time investment will naturally be heavy. Additionally, the game has a more robust single-player experience than anything I’ve run across so far. You also get to keep the cards you draft in the Forge draft format, which is something I always dreamed of with Hearthstone.

To figure out which one you’d be most suited to, you’ll want to look at the things they all have in common – the foundation of all four games – and decide which of them has the right offerings, specifically in level of complexity, and areas that contribute the most to it.

One of the most basic ideas for CCGs – a core element of many strategy games, in fact – is a set of factions. Hearthstone has classes, each with its own set of cards and a Hero Power to further distinguish them from each other. Duelyst takes this approach, with specific Generals tied to each of the factions. Just like Hearthstone, you can make any number of decks from each class, but you can never mix factions together, which imposes severe restrictions on deck building. Eternal, however, is more akin to Magic, where you’re able to mix the factions/colors for your decks, exponentially increasing the number of options you have when building a deck.

For example, let’s say both Duelyst and Hearthstone have three popular deck types for each of five factions. That makes a metagame of about 15 different deck types. In Eternal, on the other hand, if each color has 3, and each 2-color combination has 2, and each 3-color combination has 1 archetype for it, we’re looking at an order of magnitude in difference, which is a huge leap in strategic depth. This is, admittedly, hyper-simplified, but demonstrates the point well enough. (Math people and metagamers, you have my apologies.)

While Eternal definitely wins the depth-of-deckbuilding fight, Duelyst‘s focus on the combat strategy can tip the scales in its favor.

Duelyst did something incredibly novel for full-fledged CCGs in its tactical combat. There have been card-like games on tactical maps, yes, but to build an entire CCG on the idea is ambitious. Typically, you and your opponent have your own sides, and you can never really cross the boundary. Your creatures can attack, sometimes able to target creatures, sometimes only your opponent, but you can’t flank your opponent in a Hearthstone duel. Duelyst decided to fix that with a tactical map, a la XCOM, where you control your general and minions in turn-based, tactical combat. Each faction has a unique card mechanic that plays into the tactical showdown, like the Backstab ability, which gives bonus damage on attacks from behind, while also preventing your target from hitting you back. 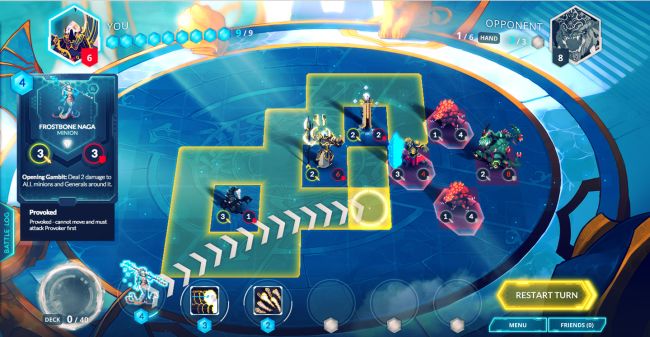 Eternal‘s combat will be more familiar to old-school card slingers, mirroring the combat of Magic, where you declare your attackers, but the opponent gets to choose what to block and with which of their creatures. The difference between Eternal‘s combat and Hearthstone‘s is still a huge deal, though it may not seem so at a glance. The ability to attack creatures directly changes everything about the game and the strategy, though it is not necessarily any more or less deep, strategically speaking, than the alternative.

Suffice to say, Duelyst is a clear winner in the depth of the combat system.

Mana, Lands, Power, and Whatnot

One of Hearthstone‘s greatest strengths is its mana system. I’ve taught a lot of people a lot of card games over the years, and balancing lands/mana is one of the hardest lessons to teach newcomers. Removing the element of chance from the mana system like Hearthstone was a lesson Duelyst took to heart, a simplification it can afford, given its tactical gameplay. This is another category that Eternal wins, though even there you’ve got some sneaky backend “cheats” to help avoid the frustration of frequently having too little, or the wrong color of your resource. 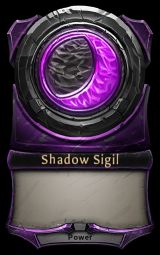 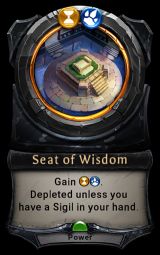 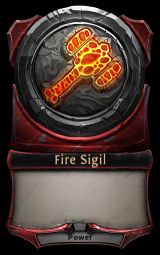 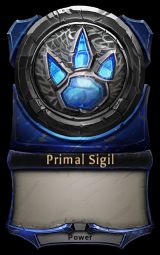 Eternal uses Sigils representing Influence by faction, as well as the total Power you can produce, with each Sigil played adding to both Influence and total Power. Sigils are cards that you must draw and play, so there can be a bit of reliance on the random chance of drawing cards, but Eternal‘s system for Mulligans (deciding whether to keep the first set of cards you are dealt) helps offset that, by guaranteeing at least two Sigils, if you don’t keep your first hand. You’ll still get mana screwed, don’t get me wrong, but it happens less frequently than other similar systems, in my experience.

Veteran players like myself want a bit more out of a CCG sometimes, even if I am quite fond of the simpler fare in different circumstances. Eternal and Duelyst, among many other digital CCGs, want to fill a gap in what’s on offer in terms of depth, but they approach it from entirely different angles, which offers players the choice in where they want more complexity. I’d put them roughly on par with each other for overall complexity, so it’s mostly a matter of what your favorite part of the genre is.

If deck building is a bit intimidating for you, Duelyst will be a better fit. The tactical combat makes the whole game more dynamic, but your deck options are still limited enough to not feel overwhelming.

If you want to play the meta, brew new decks, and see just how far you can push the limits of what 40 cards can do, Eternal has far more robust deck construction. The gameplay/combat is very familiar, however, closer to Magic than Hearthstone.

Of course, they’re both Free to Play, so if CCGs are your thing, I can confidently say they’re worth the money.