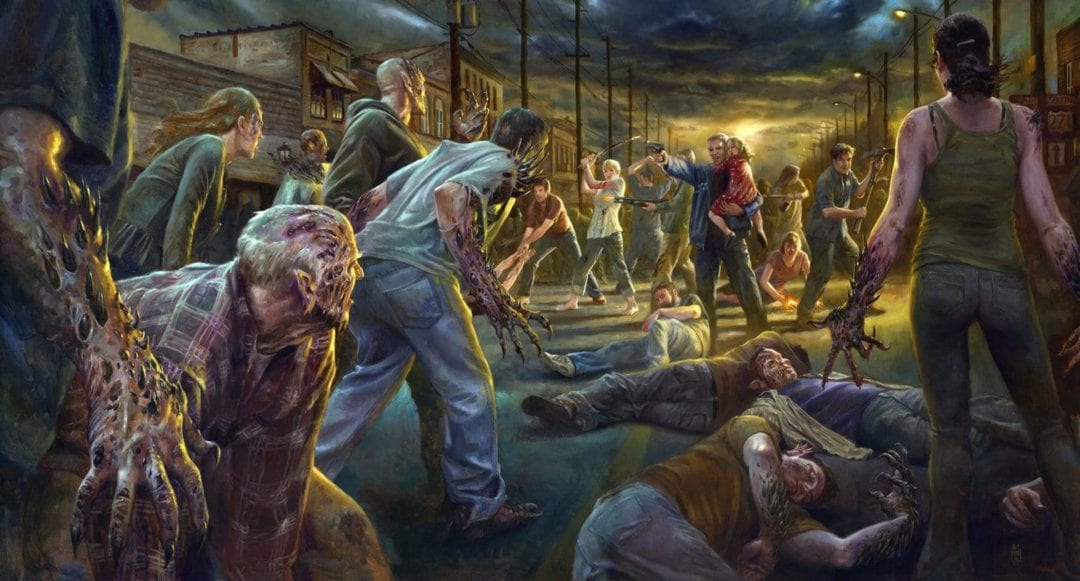 I spent New Year’s Eve joining a local tradition in Candlepoint, Wisconsin: The Polar Plunge. My hometown of Chicago does a similar event in March, drawing the brave and charitable to Lake Michigan to take a dip in its freezing waters. Candlepoint’s version raises money for the eye-roll-inducing Snow Angels CHILLdrens Fund. Also there’s a wendigo in the town’s lake and if you don’t find him in time, someone’s going to die.

Candlepoint is where the apocalypse begins in Lone Shark Games’ Apocrypha, a cooperative card game that combines the flavor of Welcome to Night Vale with Neil Gaiman’s American Gods. The base set of the game contains a dozen adventures, each representing the weird events that happen during a month in Candlepoint starting with New Year’s Eve and ending with a Christmas adventure. We played through January and February, dealing with both the wendigo and a blood drive being led by creepy cultists in just one day. The structure, however, makes the game perfect for a group that can’t really get together more than once a month.

Each player takes on the role of a “saint,” a person who has pierced the veil of ignorance set upon the world by creatures of myth and who can see the monsters that dwell among humanity. Each has their own backstory and special abilities like a New Orleans voodoo practitioner who rarely has to discard cards because he’s mostly conjuring things, or a corrupt cop who’s particularly good at beating up monsters. They each have a deck of cards representing their equipment, allies, and magical abilities which they use when exploring locations in town like the university or mega mart. Each of these spaces has their own deck representing good and bad player situations which must be resolved in order to find the main threat of the encounter, like the wendigo.

Anyone familiar with the Pathfinder Adventure Card Game will spot Lone Shark Games’ house style here. The two games are different enough that you have to read all the rules of Apocrypha — and there are a lot — to grasp the differences, but once you do it’s easy to spot which concepts have been reused but renamed. A location may be called a nexus in Apocrypha, instead of being closed it’s sealed, and good things your character collects are gifts instead of boons; these concepts and others are fundamentally the same.

What has changed is the flavor, and Apocypha’s is rich and full-bodied. While the Pathfinder Adventure Card Game matches the classic fantasy style of its source material, Apocrypha’s modern horror fantasy provides plenty of opportunities for unsettling threats and heroes who are almost as messed up. One of my friends is a doctor in real life, so she chose to channel that by playing Dr. Zeez, an “unlicensed necrosurgeon” wearing a plague doctor mask. A “storybook” informs players of the goals for each mission, but it’s also filled with unsettling short stories and ominous art. Some of the text is provided by The Kingkiller Chronicles author Patrick Rothfuss, Penny Arcade co-creator Jerry Holkins, and other writers, giving the narrative quality and variety.

The difference is also reflected in the mechanics. Rather than leveling up like Pathfinder characters, saints gain special powers from succeeding in missions and unlocking fragments of repressed or ancestral memories. Spend a night in an abandoned house or drinking with an old man who might be a wolf or a coyote, gain a new power. These powers can be single-use special abilities that are then discarded, or permanent changes to your character.

While Pathfinder Adventure Card Game players redo any mission they fail, you’re not always expected to succeed in Apocrypha. We lost to the wendigo, which was buried too deep in the deck representing Candlepoint’s icy lake for us to get to it before the deck of omens, each game’s timer, ran out. Part of that loss was caused by rookie mistakes. We lost time by shuffling potentially useful items into a location deck and forgetting to use cards that could have given us needed wins. But the game generally feels less forgiving than the Pathfinder Adventure Card Game did. When you lose, you collect a death card representing a vision of your demise which takes up one of your valuable fragment slots. If a single character fills all nine of their fragment slots with death cards, they are removed from the game forever. Luckily players get to choose who takes the death at the end of a failed mission, so the bad luck can be spread around to avoid having someone retire a character they’re enjoying.

The biggest problem with Apocrypha might be that it’s designers tried to do too much to distinguish it from their past work. The new game has the noble goal of reducing rules text on cards but that results in a nearly indecipherable block of keywords and symbols representing concepts that would have previously been spelled out. Everything makes sense once you’ve played for a while, but there’s a really high barrier for entry. In the time it took for us to learn the rules, one of our players decided he’d rather just take a nap.

Further limiting Apocrypha’s accessibility, it restricts how much you can help each other. Each character has specific rules for how they can assist others, and those rules are based on where you’re physically sitting while you play or where your character is positioned in the game. The beat reporter can help a character at her location with a mental challenge, but the corrupt cop can only do that for someone sitting to his right. It adds needless complexity to a game that’s supposed to be cooperative.

Once we got the hang of things, we were able to clear the second adventure with relative ease, pausing to read the flavor text aloud and laugh or grimace before plotting out how best to use our characters’ relative strengths to protect Candlepoint. The copy I played is in Columbus, so I’m unlikely to get to play again until June, at which point I’ll have months of story to catch up on to realign the game’s calendar to the real world. After that I’m hoping we can move onto the next adventure which takes the heroes to Chicago to fight werewolves. I’m pretty excited to play through a horror story in my own hometown. I just hope by then I still remember all the rules I worked so hard to learn.

Rain on Your Parade: Prologue Is a (Free) Day in the Life of a Mischievous Cloud

Tron: Legacy Was a Disney Princess Movie Aimed at Boys