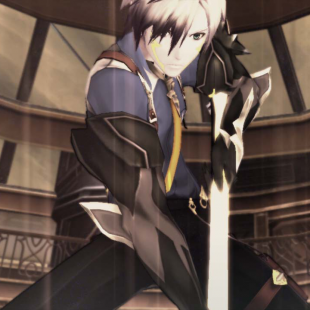 Things never seem to work out the way the good guys plan. Following the events of Tales of Xillia, the cast finds themselves in a world only briefly explored near the end of Xillia. If Xillia 2 looks extremely familiar, it’s because it’s basically an extension of the first – now with some new characters, a more fleshed out setting in Elympios, and a quiet protagonist for whom you make decisions.

Ludger Kresnik is a 20-year-old man who gets wrapped up in a train incident and meets an eight-year-old named Elle Marta. Having just watched her father die, Elle follows his last wishes to find the land of Canaan, a magical world spoken of in fairytales. During Ludger and Elle’s travels, they run into characters of Tales of Xillia. All playable characters will make a return and join the party, as well as some foes who have reconciled.

We saw very little of Elympios in Tales of Xillia. Ludger lives in Trigleph, the city players could see the most of in Elympios. The rest of that world should prove to be just as urban and modern – a stark contrast to the other world of Rieze Maxia in Tales of Xillia. Because people of Elympios cannot use spirits, their technological advancements are incredibly different from that of Rieze Maxia, where everyone uses spirits as technology. In addition to steam power, Elympions rely on spyrix technology, which are harmful to spirits.

Jude Mathis, the male protagonist of Tales of Xillia has graduated and is in the middle of researching spyrite to create a harmless power source. Jude has become more independent thanks to his travels with Xillia‘s female protagonist Milla Maxwell. Jude isn’t the only one who’s changed. Leia has quit her job as a nurse to become a reporter, Rowen has become Rieze Maxia’s prime minister, Elize is less shy and continuing her education, and Gaius and Muzet have reconsidered their views from Xillia.

Bandai Namco is stressing that Tales of Xillia 2 has a darker story and choices that the player can make. Choice has always been somewhat limited in JRPGs – the Tales series especially. The player could occasionally choose dialogue options for Lloyd in Tales of Symphonia, and Tales of Xillia 2‘s choice system appears similar. Certain choices you make will affect other party members’ affinity with you. However, the player will be choosing Ludger’s choices, big and small, more than what’s been included in Tales games before. Of course, the game will still have a linear story, which isn’t a bad thing.

The battle system is largely the same as before – fast, active, combo-heavy, and playable by up to four people simultaneously. Linked artes make a reappearance, allowing the player to access new moves. Added in for Xillia 2 is Ludger’s ability to swap weapons. He can use dual swords for short range, a hammer for mid-range, and dual pistols for long rage. Each weapon set has different artes. Even better, the weapons can easily be switched in and out in the middle of battle with two buttons pressed simultaneously. Ludger gets to be special even further via his Chromatus, a transforming ability that the player can trigger once a gauge has filled in battle. In this state, Ludger’s attacks are flashier and stronger, but only for a limited time.

Unfortunately, dual audio is still not an option. Having been a feature of Tales of Symphonia Chronicles, I hoped for it to be added in Xillia 2 after it was absent in Xillia, but there will still be no Miyuki Sawashiro as Milla or Tsubasa Yonaga as Jude. That said, the English cast is still good most of the time once you’ve grown accustomed to the voices.

Elle is not a playable character. She is significant to the story, but she stays out of combat and appears to tag around Ludger mostly. There’s also a fat cat. Fat cats make everything better.

Let’s just say this sequel looks a lot better than Tales of Symphonia: Dawn of the New World.

Tales of Xillia 2 launches on the PS3 in North America on August 19 and in Europe on August 22.