Chances are, if you meet someone today who’s a big fan of Batman comics and ask them how they first discovered the character the answer won’t be that they picked up a Batman book one day. Instead, you’ll hear about their early love of Batman: The Animated Series, or the Tim Burton movies, or the Christopher Nolan movies, or one of the more recent cartoons, or the Arkham video games. Ditto Superman and Wonder Woman, or any other members of the Justice League or The Avengers for that matter.

All told, we’re probably on our third generation of people who’ll become fans of comic book superheroes from adaptations outside comics: an unintended consequence of comics publishers opting to favor older, established, bigger-spending fans in the mid-80s and the product itself moving out of corner stores and magazine racks and into comic-focused hobby shops. I’m not sure if that’s a net-positive or a net-negative in the long run, but it’s definitely the way of the market right now.

Case in point: My favorite superhero remains the first one I remember discovering: Spider-Man. And I didn’t find him in a comic book or even a scenario much resembling his comic book self — instead, I first became a fan via reruns of the 80s animated series Spider-Man & His Amazing Friends, which we’ll discuss in greater detail later on down the line. I was hooked, and from that day on I devoured pretty much anything related to Spider-Man I could get my hands on.

These were the pre-Internet days for the world and pre-knowing-about-fandoms days for me, so the only way I ever found out that something “new” (to me) about Spider-Man existed was to stumble upon it: There was another cartoon in the 60s? Cool! He’s sometimes in other comics than his own? Awesome! Back then, when the entire history of everything ever produced for film and television wasn’t a mouse-click away, it was totally plausible that there’d been movies made at one time or another of every superhero imaginable and I simply hadn’t seen the tape at the video store yet… and I spent many a day reading comics or watching Spidey cartoons hoping someone would make one for him already — even if I couldn’t imagine how they’d make a real person climb walls like that.

So imagine my reaction one day around 1988 (rough estimate: something else we didn’t have in the analog-era was a timestamp for everything) when I happened to be watching a local TV station on an otherwise uneventful Summer day preparing to go out and do something when I heard the station announcer’s voice say something I never expected to hear: “…Coming up next: SPIDER-MAN – THE MOVIE!”

I couldn’t believe it, but there it was: Spider-Man. A real actor in a real Spider-Man costume, shimmying up a building, doing poses, the whole deal. So much for whatever I was planning for that day — I spent 2 hours watching this previously-unknown (to me) Spider-Man: The Movie and then the rest of the day searching all three versions of TV Guide (the “real” one, the TV magazine insert from The Boston Globe and the daily newspaper listings) for the next time it would be on so I could tape it… I didn’t find one, and I don’t remember seeing it on TV again after that. But it was real, and I’d seen it.

It was awful — not that I really appreciated how awful at the time, of course. 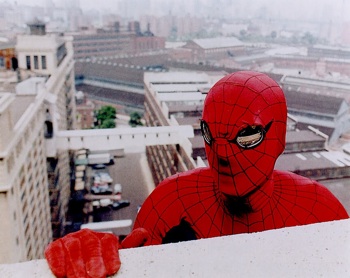 What I wouldn’t know until many years later was that this was a TV movie, and a pilot for a short-lived (and low-rated) TV series, one of Marvel’s many failed attempts at another Incredible Hulk-sized network hit. In case you were wondering: Yup, this is the point in the timeline where these revisitations start to get increasingly ever more obscure.

Unlike Hulk, which kept only the basic idea of a guy named Banner morphing into a green ogre when he got mad and rewrote a new mythos of its own from the ground up, this Spider-Man is a largely more faithful retelling of the original comics. The main difference is that Peter Parker is already a twentysomething College student (but because this is 70s TV looks well over thirty as played by actor Nicholas Hammond) working for Jonah Jameson when he’s bitten by a radioactive spider and gets his powers. In addition, Aunt May already appears to be a widow (Ben Parker isn’t mentioned and doesn’t play a role in Spidey’s origin).

One thing the movie (and the short-lived series that grew out of it) does have in common with Incredible Hulk is a lack of Marvel supervillains, a disappointment that didn’t escape my notice even when sitting in awe of its existence as a kid: I kept waiting for the introductory villain (a crooked self-help guru using radio-waves to mind control people into committing robberies) to transform into Doctor Octopus or somebody, but to no avail. 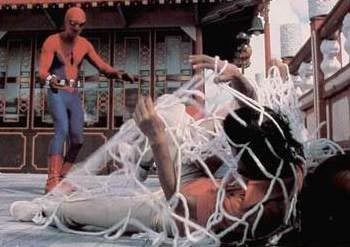 Still, if the main thing you wanted to see at the time was a flesh and blood actor doing Spidey-stuff, it basically delivered what could reasonably have been expected — even if mostly through trick edits: Hammond’s Spider-Man shoots a “web” rope skyward, the footage cuts to a different angle of Spidey scaling a building via a significantly stronger-looking cable, repeat. He sprays a volley of silly-string onto his attackers in one shot, and in the next they’re all wrapped up in a net. There was even enough money in the stunt budget for some half-hearted but charming web-swings.

The series ultimately ran for only 13 episodes (the pilot movie ran as a theatrical feature overseas), spread across a pair of abortive attempts to launch it. So goes the story, CBS wasn’t particularly fond of it as the network owners were getting self-conscious about being “the superhero network” between this, Incredible Hulk, Wonder Woman and movies/series already planned for Captain America and Doctor Strange; and Stan Lee was uncharacteristically public about disliking it. Audiences were largely indifferent.

The second two episodes, “The Deadly Dust I & II” were released theatrically and on video as a movie, retitled as Spider-Man Strikes Back; followed by the two-part “Spider-Man visit’s China” series finale “The Chinese Web” rechristened as Spider-Man: The Dragon’s Challenge. At this time, most versions are fairly difficult to find for legal sale.

It’s not difficult to see why The Amazing Spider-Man didn’t take off in the U.S., but what few Western fans didn’t realize was that across the ocean a much different Spidey was making a major name for himself on live-action TV… in Japan!

Tune in next week for look at Spidey’s exploits across the sea.