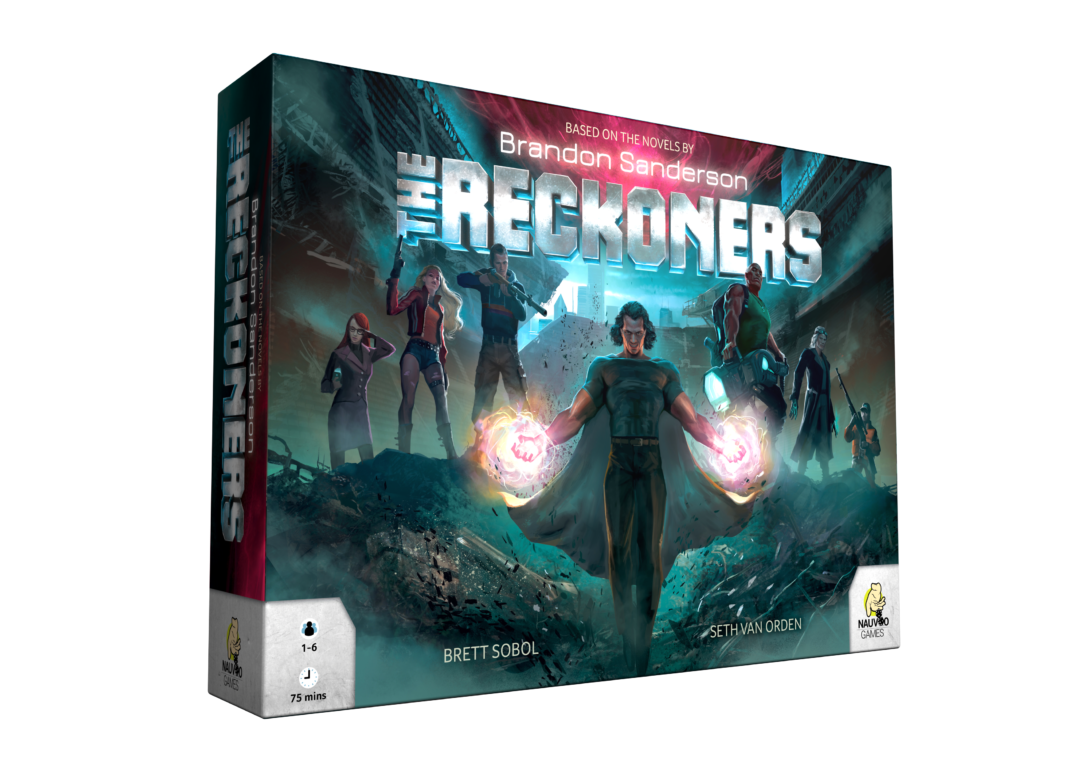 Brandon Sanderson’s bestselling The Reckoners YA series is set in a post-apocalyptic future where people started gaining superpowers and almost universally became villains. The most powerful of the beings dubbed Epics are nearly unkillable and have taken over major cities with the help of lesser Epics and humans willing to serve them in exchange for wealth and power. Some believe superheroes will eventually emerge, but other people have grown tired of waiting, joining a ragtag resistance known as the Reckoners with the impossible goal of bringing down the worst superpowered tyrants.

It’s a bleak setting and the series is filled with betrayal, death, close calls, and Pyrrhic victories. That’s why it’s so disappointing that Nauvoo Games’ The Reckoners board game adaptation is just too easy. The cooperative game recreates many of the details in Steelheart, the first Reckoners book, but fails to deliver any of the drama and twists that made it a compelling story. The mechanics leave little up to chance, meaning that if the players don’t make big mistakes victory can be assured after the first turn.

The Reckoners board game lets players take on the role of one of the six members of the group in Steelheart as they work together to try to defeat the eponymous Epic, a not so subtle evil Superman analogue who has taken over Chicago. As is the case in the book, Steelheart and other powerful Epics can’t be killed conventionally and can only be hurt once their weaknesses are known. While figuring out and exploiting Steelheart’s vulnerability dominated much of the plot of Sanderson’s book, here it just involves allocating enough actions to fill up his research board. Players are racing to defeat him and contain his allied Epics and human minions dubbed Enforcement before they kill too many civilians.

Players take actions each round by playing a mini game of Yahtzee, rolling dice with sides representing different actions: earning money, researching, fighting Epics, fighting enforcement, planning and containing Epics. Fully cooperative games too often turn into one player taking charge and telling everyone else what to do, so we all played the dice game on our own after talking strategy ahead of time to suggest what we generally wanted to try to focus on for the upcoming turn. We were still all working together but this twist on the suggested rules helped us feel more ownership of our individual characters. Each character is best at one of the six types of actions and has special abilities that count on certain dice rolls, so they usually focused their rerolls accordingly.

Players then coordinate to use their dice on complementary actions. Every Epic has a bar indicating what nasty thing they can and will do including killing civilians, calling in more members of Enforcement, and powering up Steelheart. It might seem like you would want to kill Epics whose powers are particularly harmful to civilians, but that’s a trap since defeated Epics are then replaced by new ones who could be even worse and will get to take their actions before you can do anything about it. Instead, victory is guaranteed by containing Epics, taking actions to power them down so that they only get to take one harmful action per turn. Even though we weren’t playing with David, the series protagonist and character who’s best at containing Epics, once we figured things out, we were always able to gather enough contain actions to keep Steelheart and his lieutenants locked down. After that, we just stacked up research and then damage to bring the boss down.

The only key is understanding what actions are important when. Having enough dice allocated to killing Enforcement is absolutely vital as they will power up Epics is left on the board. Planning gives you tokens that can be used as a wild resource the next turn which is great insurance against bad die rolls. Money is vital in the early game when it can be used to buy extra dice to roll and equipment that lets you convert one type of roll to another, further ensuring you’ll always have the actions needed to be victorious. Most collaborative board games like Ghost Stories, Sentinels of the Multiverse, and This War of Mine use a deck of random opponents or events that can break the players’ control of the situation but so long as you don’t kill any Epics in The Reckoners you don’t have to draw any new cards. You can up the difficulty by making it take more research or damage to defeat Steelheart or making his actions more dangerous but that still doesn’t deal with the base problem of the game being too predictable. It really just makes it take longer.

It’s a real shame because the game looks great. Each Reckoner has a custom plastic mini and board for storing their dice. Just as I enjoyed reading a post-apocalyptic take on my home city I loved the art for Chicago landmarks that represent in-game locations like the Museum Campus, which now houses a Steelheart Museum, or Millennium Park where the Cloud Gate sculpture stands among shattered buildings. There’s also a generic power plant which while an important location for the action in the book seems out of place alongside the well known places. Since we only had five players and thus six of the seven locations in play, that one was the obvious cut.

Better Reckoners games that are also more faithful to the book are disappointingly easy to imagine. The versions of the characters described in the game are just how they appear on the surface. In Steelheart multiple members of The Reckoners have major secrets. This would be a perfect game for a traitor mechanic, with one player actually working to help Steelheart. It would also make a lot of sense for there to be a way for some characters to increase their power at the cost of possibly turning traitor. Both could make The Reckoners more similar to the Battlestar Galactica board game, which while mechanically flawed in its own ways is so character driven that it can almost become a RPG as players lean into each role’s strengths and weaknesses. In the book, the Reckoners also take down most of Steelheart’s lieutenants before facing the villain. Forcing players to actually kill some other Epics would do a lot to up the tension by making them further divide their resources and risking really nasty Epics acting unchecked.

The Reckoners series is far from perfect. It’s got some twists that don’t really make sense, disposable characters, and an abundance of YA cliches. But it does have some cool villains, particularly Steelheart who can fly, is super strong, nearly invulnerable, can incinerate people with energy bolts and rules one of the biggest cities in America through fear. Facing him should be a lot scarier.

Captain America: Beard or No Beard?

The Difficulty of Talking About Soulsborne Games