For all of Arkham City‘s good qualities, I think taking the series in a sandbox direction is going to be remembered as a bad idea. By relinquishing control of the game’s structure and moving away from the somewhat Zelda-y model that the first game had, the concept lost focus. And the tragic thing is, there’s no way to go back. The next game in the series, if such a thing comes to be, cannot be smaller than the previous one, that’s the sort of thing that creates awkward conversations with the publishers.

A few weeks back I said that side missions are vital to a sandbox. And they still are. But another, related thing that’s vital to a sandbox is that getting around it from place to place can’t feel like a slog. The commuting aspect has to be fun in itself. For me, this is why the pinnacle of superhero sandboxing is still Spider-Man 2, the movie tie in, from the previous console generation. Getting around Arkham City with the hookshot and glidey wings feels clumsy and overcomplicated, and when viewed from above the rooftops the whole place feels kind of lifeless. You see, Batman as a character isn’t really about fun-time acrobatics the same way Spider-Man is, and that’s why Spider-Man might suit a sandbox where Batman doesn’t. Batman is about punching the bad guys, creeping in shadows, and solving crimes. Arkham Asylum played to those strengths and came out good for it, the hookshotting around was just that – a way to get around. Of all the aspects of Arkham Asylum to centralize in the sequel, that was probably the absolute worst choice.

Another problem with the loss of focus was that the villains couldn’t be developed as well as they were in Asylum. The major villains in that game were recurring presences whose threat escalated more and more with each appearance. That’s what I mean when I talk about structure. The feeling I had in Arkham City was that I either knew exactly where the villains were or that they had their own issues to deal with and probably wouldn’t get up in my face. There was none of Asylum‘s sense that Batman was being watched at every step, and each colorful character was waiting for their turn to strike at him while he’s vulnerable. It feels more like Batman has just become another floating vegetable in the undisciplined stew of Arkham City.

It matters to me that the villains are appropriately represented in games like this, because Batman is always the least interesting aspect of anything he’s in. I remember saying as much in the Arkham Asylum video, and it was after playing Arkham Asylum that I ended up buying the Arkham Asylum: Living Hell trade paperback that the game references at various points. I enjoyed it very much because Batman’s hardly in it. The focus is on his villains, their motivations, their interactions with each other and the environment they create for themselves.

I’ve made this point in conversation with friends several times recently, probably catalysed by Arkham City itself, but a supervillain like the Joker or Scarecrow is a force for construction. They’re the ones coming up with plans and complex devices. They’re visionaries each with their own personal idea of how to change the world around them. Whereas Batman and most superheroes like him exist solely to counteract them, regardless of intention. They are entirely reactionary, working only to smash up and ruin the lovingly-crafted plans and machines of the supervillains. Can anyone say for certain the world would definitely be a worse place if Lex Luthor ran it? Or that no positive effect could be gained from Scarecrow’s studies of fear? Maybe some of these guys have interesting ideas and talents that could be better channeled, but a superhero will just punch them in the face because they’re a threat to the status quo, and therefore WROOOOONG. 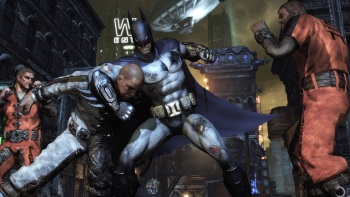 That’s why I’m fascinated by supervillains. They are the critical thinkers of super-society. Superheroes in movies have gotten kind of stale, and we’re yet to see how the new Batman film will work out, but personally I’d be a lot more interested in a film in which the protagonist was one of Batman’s villains, exploring their history, their motivations and everyday life. And before any of you bring up Catwoman, I mean an unambiguous villain, not an anti-hero who looks good in leather pyjamas. Maybe Batman can appear at the end if he promises to be good.

A very long time ago, in my review of Saint’s Row 2, I first hypothesised a supervillain sandbox game, jokingly titled Mankind Has Yet To Recognise My Genius. Jokingly, but I would still totally buy it. Lately I’ve given some thought to how it would work. Saint’s Row 2 would be a good starting point – you start the game being released from super prison back into some kind of Metropolis-like glittering future city, and then you have to establish a base of operations and start building your gang. I picture that working not dissimilarly to the assassin apprenticeship scheme from Assassin’s Creed Brotherhood. You start off picking up someone with potential, perhaps in minigames inspired by the Joker’s “tryouts” scene in The Dark Knight, and build up their abilities by sending them on assignments. Except rather than in Brotherhood where the assignments go on behind the scenes, these are actual physical events in the real world, and you can either leave them to it and hope for the best or join in the fray on the ground floor, which would risk your own life but make your reputation all the more fearsome.

Perhaps as your minions distinguished themselves they could acquire their own gimmicks, like one would lose a hand, replace it with a boat hook and start calling himself “Longshoreman X.” But you’d want to keep an eye on any henchman who goes high-profile, because maybe he’ll start thinking it’s time Longshoreman set out on his own and formed his own gang of cabin boys.

But most importantly MHYTRMG would place you in a position diametrically opposed to the one Batman finds himself in in Arkham Asylum/City. So every now and again the local superhero is going to march square-jawed and straight-backed into your base of operations for one of those confrontations he seems to like. And at that point maybe you’ll blow a big whistle that makes all your minions run into the room with baseball bats and lengths of bicycle chain. Or maybe you’ve committed enough crime and extortion to be able to research and develop a big cage to drop from the ceiling, or a machine you can strap him into that wipes his memory or turns him into a pig.

But you won’t kill him. You’ll never kill him and he’ll never kill you, because the unspoken agreement in the superhero / supervillain relationship is that they both need to be held in check by the other. A supervillain unchecked will wreak havoc, and a superhero without a clear, unambiguously evil villain that they are uniquely qualified to combat might end up committing more and more ethically dubious vigilante activities. This is the central drama, the everlasting stalemate at the core of the story. I explained as much to the judge when I was caught trespassing at the nuclear power plant in a cape, but showing him my death ray plans only made matters worse, if anything.