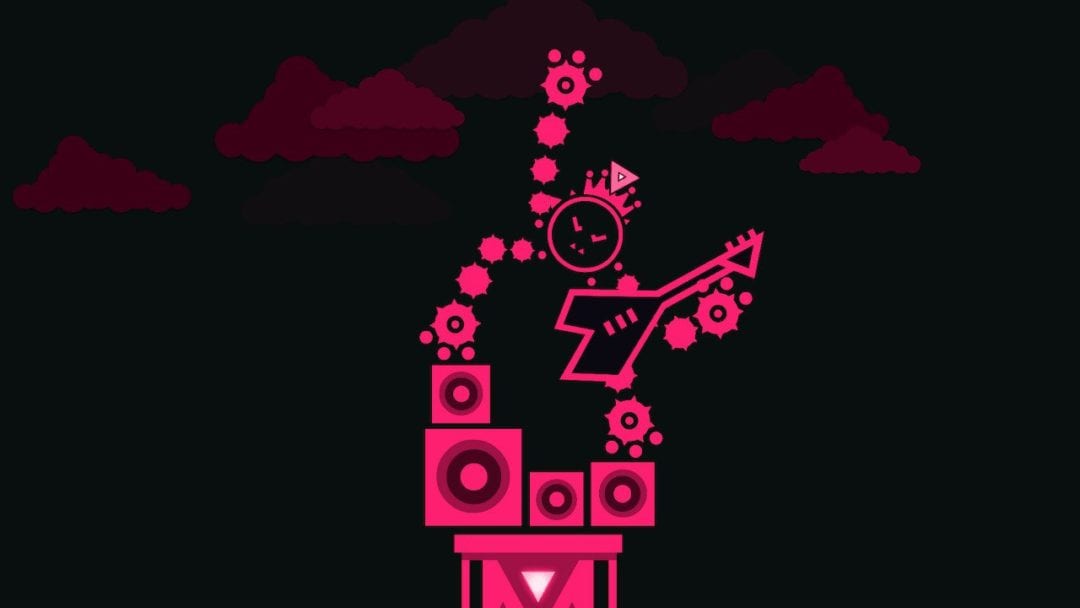 Rule 1: The level has to be visually appealing.
Rule 2: It has to be orchestrated around the music.
Rule 3: It always warns the player what’s coming up.

These rules are in order of priority because even if you’re not into video games at all, at least you can appreciate the spectacle. The presentation is an enjoyable art form all on its own. I’ve seen lots of people at conventions pass by Just Shapes & Beats and stick around simply because they were hypnotized by the minimalistic patterns on the screen. Toddlers were staring at the screen, sitting atop their parent’s shoulders, trying to  analyze it like those baby Mozart shapes animations. I don’t know how many many of those I’ve watched to get inspiration for levels. I always tried to explain that to my wife. “I swear honey, I’m working!”  Sometime I would sacrifice some of Rule 3 because the visual warning combined with the music was too intense. If a surprising challenge gives me goosebumps while I test the levels, that’s usually a good sign.

Before following those rules, I have to begin my process for creating Just Shapes & Beats levels. I start by listening to chiptune songs, usually in the car or at the gym. I’m more likely to eliminate the song if it has lyrics, because I feel like they distract players who are already panicking enough. Once in a while, a song really gets stuck in my head and I start to visualize a theme, or I imagine a certain visual pattern that would match the music. In the case of the song “Vindicate Me,” after a couple of listening I was seeing an industrial theme with mechanical shapes that stomp the ground as they progress along an assembly line like in one of those How it’s Made videos. I tried to represent that visually, and ended up with the game’s pill shapes slapping the ground and jumping around on pistons. It wasn’t my original idea, but that’s OK; it rarely ever is.

Other example would be “Chipzel – Spectra.” As a big fan of Super Hexagon myself, I knew hexagons had to be the main theme. I played around with the concept of hexagonal rooms and my first iteration was cool, but the rooms were way too big. In order to fit with the music, the camera had to pan really fast which was breaking Rule 3. There wasn’t enough time to react. So I ended up filling the entire screen with hexagons in much smaller rooms, making the room seem to dance by panning the camera very slowly.

I built a level editor to help me. It’s basically a tool that imports a track, shows me a timeline, and allows me to map shapes on my keyboard. For example, I’d put the big stomping bars into “Space,” listen to the music, and smash space on the beat. Then I could manually adjust the parameters of the shapes such as position, size, rotation, and warning. That tool is extremely handy. You can see how I do it live on my Twitch channel Lachhh.tv.

The boss levels were the most difficult of all. I wanted to tell a story through the levels themselves and that was very challenging; there’s a lot of information to convey to the players while respecting the three rules above. Some bosses took me three days while “New Game,” the biggest one of all, took me two months.  It’s by far the most difficult thing I’ve ever done!

Just Shapes & Beats also wouldn’t be “mainstream” without my kids. During development, I often wondered: “Can I play this with my 5-year-old boy? Will it be fun for him and for me at the same time?” When I’m playing with my kids, the completionist in me is frustrated. If I can give a life to rescue my little boy just to watch him drop in the spikes five seconds later, it gets really hard to progress.

So with that in mind, I tried to create play that gives you the option to rescue your partner but at the price of an additional challenge. Putting yourself in danger to rescue a friend? Sign me up, it feels so rewarding for both players and creates a lot of awesome “feel good” moments.

Even after trying to make the game more accessible I’m still surprised by just how many people say: “It’s a great party game!” While I appreciate the compliment, I always envisioned the game as a single-player experience with a story to tell. That’s not what people were seeing and not what we were showing at events. I was extremely stressed that I was focusing on the wrong things: “This is not what people are expecting. Will they like it?” My vision was to set the expectation of the game very low, starting with the simplicity of the game’s name. After playing the first three levels, I wanted the player to go: “Oh OK. I get it!” and then I would punch him in the face with a boss. I want the player to go “WTF!?!?” That’s my favorite thing. Then after defeating the boss, I want to punch him again by expanding the game’s universe with a beautiful landscape filled with friendly characters, and then punch him again with another boss destroying the entire thing.

Even though that’s not what people were seeing or even wanted from the game, I stuck to my original vision and my process. I’m extremely thankful for the reception, which has been absolutely crazy. When you pour four years of your life into something, the only thing you really want is for people to like it. Well that and a boat.

Simon Lachance
Coder extraordinaire, advice giver, baby maker, proficient with Microsoft Words. Simon “Lachhh” Lachance is the human swiss knife behind the zeros and ones at Berzerk Studio. His interests include long walks to the fridge, cat gifs and always looking like he just got out of bed.